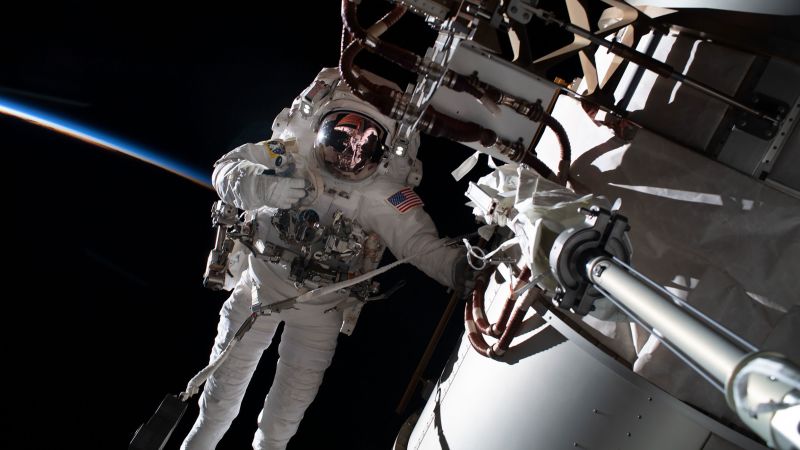 The International Space Station will receive a power boost during a spacewalk Saturday as NASA astronauts Josh Cassada and Frank Rubio install a solar array outside the floating lab.

The spacewalk is on track to begin at 7:25 a.m. ET and will last for about seven hours, with live coverage broadcast on NASA’s website.

During the event, Cassada will serve as an EV1 member and wear a red striped suit, while Rubio will wear an unmarked white suit as an EV2 member. The duo performed their first spacewalk together in November. Against the backdrop of stunning views of Earth, the team assembled a mounting bracket on the right side of the space station’s truss.

This device allows more solar arrays, called iROSAs, to be installed to increase the electrical power of the space station.

The first of two solar arrays will be installed outside the station in June 2021. The plan is to add a total of six iROSAs, which will potentially boost power generation on the space station by more than 30% once they are all operational.

Two more arrays were delivered to the space station Nov. 27 aboard SpaceX Dragon’s commercial resupply mission 26, which also She carried dwarf tomato seeds and other experiments to the orbiting laboratory.

During Saturday’s spacewalk, Casada and Rubio will install a solar array to increase capacity in one of the space station’s eight power channels, located on the station’s right truss.

Once the astronauts unpack the array and snap it into place, it will be about 63 feet (19 meters) long and 20 feet (6 meters) wide.

The spacewalk duo will also disconnect the cable to reactivate another power channel that recently experienced an “unexpected stumble” on November 26.

“By isolating a section of the affected matrix, which was one of several damaged chains, the goal is to restore 75% of the matrix’s functionality,” according to a NASA release.

Casada and Rubio will spacewalk again on Dec. 19 to install a second solar array on another power channel, located on the station’s port gear.

The original solar arrays on the space station are still functional, but they have been supplying power there for more than 20 years and are showing some signs of wear after long-term exposure to the space environment. The arrays were originally designed to last 15 years.

Wear can be caused by the thrust shafts, which come from both station and station pushers The crew and cargo vehicles that come and go from the station, as well as the wreckage of a small meteorite.

The new solar arrays are placed in front of the original arrays. It’s a good test case for new solar arrays, because that same design will power parts of the planned Gateway lunar outpost, which will help humans return to the moon by NASA’s Artemis Program.

The new arrays will have a similar life expectancy of 15 years. However, since the degradation of the original arrays was expected to be worse, the team will monitor the new arrays to test their true longevity, as they may last longer.