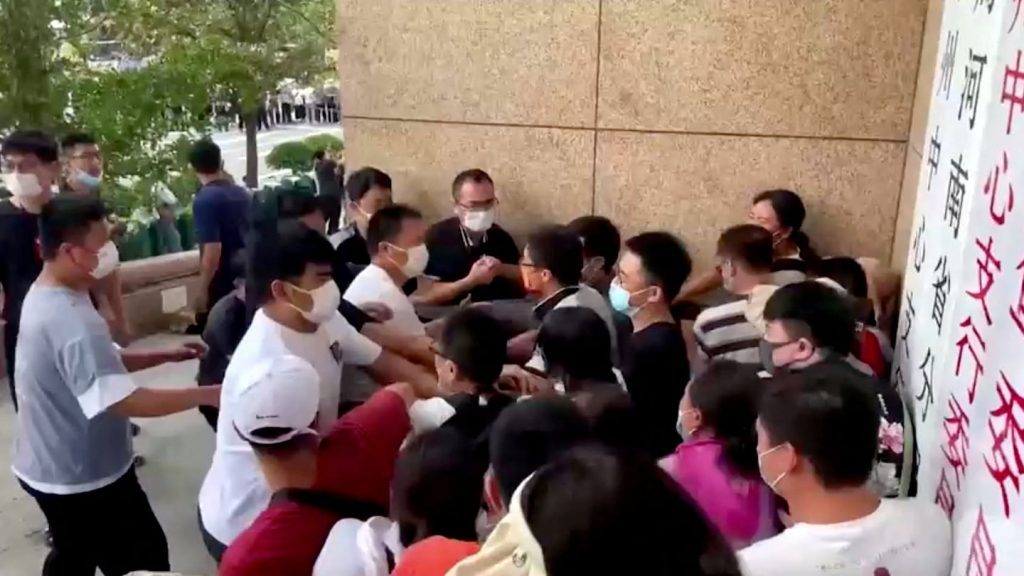 Hundreds of rural bank customers in central China’s Henan Province were overrun, beaten and dragged away by a group of unidentified men on Sunday as they protested against local government corruption amid a months-long freeze on their deposits.

Since mid-April, depositors have been pressing Henan authorities to help retrieve savings from at least four small “village” banks that have halted withdrawals. The campaign attracted national attention last month after a planned demonstration in the capital of Henan, Zhengzhou, was thwarted by digital health codes mysteriously turning red. After a nationwide protest over the misuse of the anti-coronavirus system, the central government stepped in and punished five local officials.

Over the weekend, depositors tried again, this time with valid “green” codes. At dawn on Sunday, according to videos of the incident shared on Chinese social media, hundreds of protesters raised banners alleging corruption on the stairs of the local branch of the People’s Bank of China, including English-language banners declaring “No deposits. No human rights.”

Another banner read: “Chinese dreams of having 400,000 depositors in Henan are shattered,” a reference to President Xi Jinping’s slogan that promises a better life for those who work hard and remain loyal to the Chinese Communist Party. Many waved Chinese national flags.

They also accused the government of working with the “mafia” to violently suppress the protests. It is not clear exactly why banks have frozen withdrawals, but police are currently investigating Henan New Fortune Group, a shareholder in four banks, on suspicion of illegal fundraising, according to local media reports.

It is common for police in China to be present at sensitive events without a uniform, and instead wearing pre-made badges. During previous legal proceedings for Chinese human rights lawyers, foreign journalists and diplomats congregating outside the courtroom were sometimes pushed by unidentified individuals wearing identical yellow smiley face badges.

The unusually bold demonstrations were met by dozens of uniformed police officers as well as a team of heavyweight men dressed in mostly white, all arriving together. Videos of the incidents, which were widely circulated on Chinese social media before the sergeants intervened, showed the blue-shirted officers standing while the burly men in white shirts began attacking the crowd. The protesters were dragged up stairs before being taken away. Some were loaded into buses, often sporting bruises from the clashes.

“I was in shock from yesterday until today,” one protester said in an interview, asking not to be identified for fear of official repercussions for speaking to foreign media. He repeatedly described these men as “anonymous” but added: “I never thought that officials could use this kind of violent beating against unarmed and defenseless ordinary people.”

“If I hadn’t tried it myself, I wouldn’t really believe it. When foreign media talked about similar incidents in the past, I always thought it was slander.”

In response to the stage’s videos, Tsinghua University law professor Lao Dongyan called on the Weibo microblog for those behind the beatings to hold criminal responsibility.

Lau added that the media’s “immune system” and the law should have prevented depositors seeking to redeem their savings from slipping into such brutal scenes. “This is concrete evidence of a problem with the immune system: All natural pathways to getting relief are blocked. What’s scary is that this may just be the beginning,” she said.

Loss of savings is a relatively common cause of protests in China, despite rampant efforts by the stability-obsessed Chinese Communist Party to prevent public unrest. In recent years, crackdowns on poorly regulated financial products and peer-to-peer lending have repeatedly drawn investors to the capital to pressure the authorities to make up for losses.

Rural banks in China are currently the focal point of a government drive to rein in debt. These institutions make up about 29 percent of all high-risk financial entities in the country as of mid-2021, according to the People’s Bank of China.

In the face of increased competition from large institutions, many small banks in recent years have tried to attract depositors who use higher interest rates as well as register customers from all over the country for online services. He Ping, a professor at Renmin University School of Finance, said the regulations for banks were not prepared for Internet finance, Tell Sanlian Lifeweek Magazine.

The Henan Banking and Insurance Regulatory Commission said Sunday that it will speed up the verification process for customers of the four village banks under investigation and announce a solution to the problem soon.

However, depositors continue to look for ways to pressure the Henan government not to ignore the case, including commenting under the official Weibo account of the US Embassy in China. Quickly report on Zhengzhou. One user wrote on Sunday Save Us.

Vic Chiang in Taipei, Taiwan contributed to this report.

See also  Lebanon and Israel conclude a maritime border deal, according to Lapid