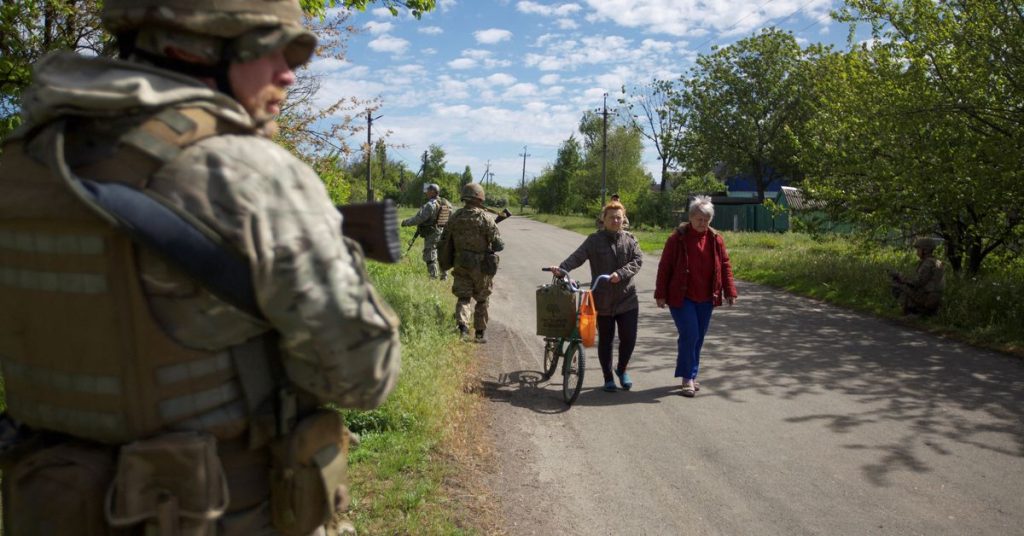 Lviv (Ukraine/Berlin) (Reuters) – US President Joe Biden said on Tuesday that the crisis in Ukraine is a global issue that increases the importance of maintaining international order, territorial integrity and sovereignty.

Biden’s comments, delivered at the opening of the “quartet” meeting of Indo-Pacific leaders in Tokyo, come a day after he broke the agreement and volunteered US military support for Taiwan, the self-governing island claimed by China. Read more

“This is more than just a European issue. It’s a global issue,” Biden said of the crisis in Ukraine at the Quartet meeting that included the United States, Japan, India and Australia.

Biden stressed that Washington will stand by its allies and push for a free and open Indo-Pacific region.

He said: “International law and human rights must always be defended, no matter where they are violated in the world.”

Ukrainian President Volodymyr Zelensky told global business leaders in Davos on Monday that the world should increase sanctions against Russia to deter other countries from using “brute force” to achieve their goals.

Germany, the EU’s largest, said the EU was likely to agree to a ban on Russian oil imports “within days”, as Moscow said its economic ties with China would grow amid the West’s isolation over the conflict in Ukraine.

Many of the European Union’s 27 member states rely heavily on Russian energy, prompting criticism from Kyiv that the bloc has not moved fast enough to halt supplies.

Hungary is demanding energy investment before it agrees to a ban, and is in conflict with EU countries seeking quick approval. The European Union has offered up to 2 billion euros ($2.14 billion) to central and eastern countries lacking non-Russian supplies.

Russian Foreign Minister Sergei Lavrov said the Kremlin would focus on developing ties with China while severing economic ties with the United States and Europe.

“If they (the West) want to offer something in terms of the resumption of relations, we will seriously consider whether or not we will need it,” he said in a speech, according to a text on the State Department’s website.

“Now that the West has taken (the position of a dictator), our economic relations with China will grow even faster.”

On Monday, Zelensky called on Ukraine’s allies to pressure Moscow to exchange prisoners.

“People exchange – this is a humanitarian issue today and a very political decision that depends on the support of many countries,” Zelensky said in a video link to a question-and-answer session with the audience at the World Economic Forum in Davos.

“We don’t need Russian soldiers, we just need our own,” Zelensky said. “We are ready to exchange until tomorrow.”

Russia sent thousands of soldiers to Ukraine on February 24 in what it called a “special military operation” to demilitarize its neighbor and root out dangerous nationalists – allegations that Kyiv and Western countries have denied as false pretexts for a land grab.

Having captured the port city of Mariupol in southeastern Ukraine last week after months of siege, Russian forces now control a largely unbroken area to the east and south.

They are trying to encircle the Ukrainian forces and seize the Luhansk and Donetsk provinces that make up the eastern Donbass region, where Moscow supports the separatist forces.

A total of 12,500 Russians were trying to take Luhansk, Serhi Gaidai, the district’s governor, said in Telegram. Gaidai added that the town of Severodonetsk was being destroyed, but that Ukraine had forced Russian forces out of Toshkivka to the south.

Donetsk region governor Pavlo Kirilenko told local television that the bombing was taking place along the front line, with the town of Avdiivka being exposed to coal mining around the clock.

The military command of Ukraine’s Joint Task Force said that Russian forces fired into 38 districts of Donetsk and Luhansk on Monday, killing seven and wounding six.

Reuters could not immediately verify the information.

Zelensky revealed Ukraine’s worst military casualties in a single attack of the war on Monday, saying 87 people were killed last week when Russian forces bombed a barracks at a training base in the north.

Denmark’s pledge to send Harpoon anti-ship missiles and a launcher to Ukraine, announced by the United States on Monday, is the first sign since the Russian invasion that Kyiv will receive US-made weapons that significantly expand its strike range. Read more

Fighters made by Boeing (ban)to push the Russian navy away from Ukraine’s ports on the Black Sea, allowing the resumption of exports of grain and other agricultural products.

In what could be the first of many war crimes trials stemming from the invasion, a Kyiv court has sentenced a young Russian tank commander to life imprisonment for the murder of an unarmed civilian. Read more

Ukraine is investigating more than 13,000 alleged Russian war crimes, according to the prosecutor’s website.

Russia has denied targeting civilians or being involved in war crimes.

In a cemetery outside Mariupol, stepping on long rows of fresh graves and makeshift wooden crosses, Natalia Voloshina, who lost her 28-year-old son fighting for the city, said that many of Mariupol’s dead had no one left to honor their memory.

“Who will bury them? Who will put a plaque?” She asked.

“They don’t have a family.”

Reporting by Oleksandr Kozhukhar in Lviv, Pavel Polityuk and Natalia Zinets in Kyiv, and Reuters journalists in Mariupol; Written by Kostas Pettas and Himani Sarkar; Editing by Rosalba O’Brien and Michael Perry