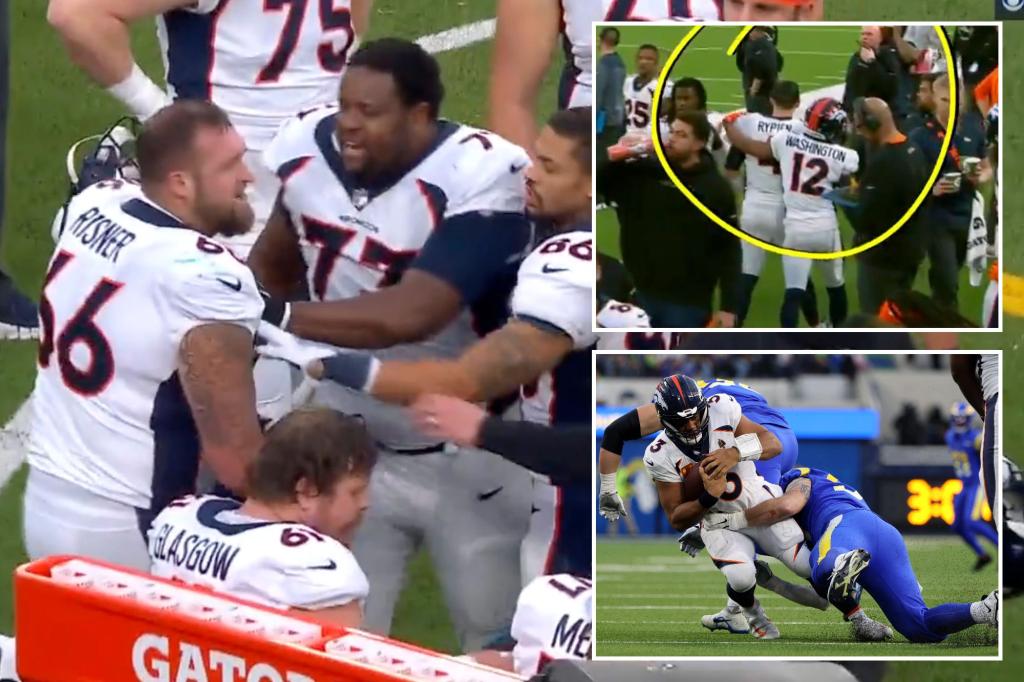 Russell Wilson wasn’t the only Broncos quarterback to have a difficult Christmas.

Backup Brett Rypien was involved in a bizarre sideline brawl with Denver’s offensive line as the team spiraled toward an embarrassing 51-14 loss to the Los Angeles Rams.

Wilson was sacked on consecutive plays to finish his career with the team trailing 34-6 in the third quarter. Rybian then went on to say something to the offensive line when he was pushed by guard Dalton Reisner. CBS sideline reporter Tracy Wolfson was the first to report the incident.

“Tensions are high, Jim (Nantz), on those Broncos sidelines,” Wolfson said. Backup quarterback Brett Rypien came after that sack, and he went to the offensive line. Words to them and Dalton Risner were defending Russell Wilson. Risner, up the middle, shoved Rypien.

“And then Cam Sutton just tried to calm everyone up and down the sidelines. But sure, the frustration here on the Broncos sidelines.”

Rypien will go on to replace Wilson, who wrote the final chapter of his brutal first season with the Broncos. Wilson, who ended up playing peacemaker to ease tensions, finished the game completing 15 of 27 passes for 214 yards with one touchdown and three interceptions.

The Broncos’ trade to the Seahawks this offseason, which sent a massive raft of picks and players to Seattle, looks like an unmitigated disaster, made only worse by the five-year, $240 million deal they signed for the 34-year-old before the season.

“A lot has to happen,” Wilson said after the match. According to KUSA. “No. 1, I have to play to the standards I know how to play. And I’ve been playing my whole career. I’ll never let a moment like this night define me. We’re in a critical moment right now. I’m not afraid of bad moments because I know every time I always go out to the side The other… All I know is keep fighting and keep fighting.

The 4-11 Broncos finished the season in an AFC West play-off against the Chiefs and Chargers. Then they’ll have a bunch of decisions to make about their future, starting with first-year head coach Nathaniel Hackett. The former Packers offensive coordinator has been in as much heat as Wilson for this ugly season and could be one-and-one in Denver.