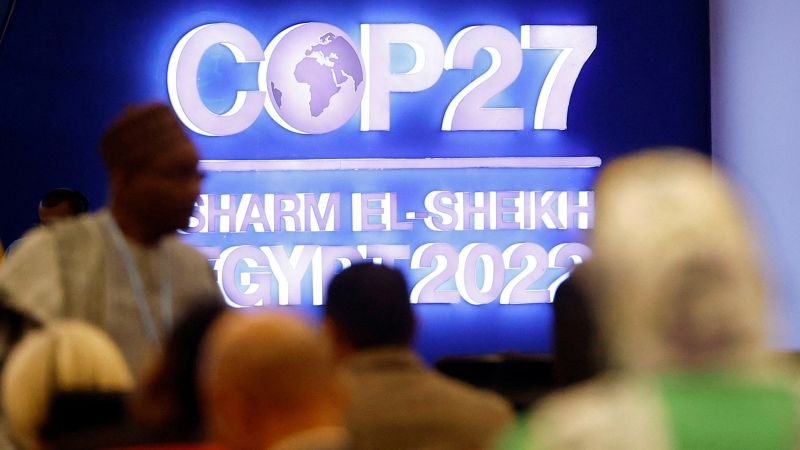 The full COP27 agreement, of which the Fund is a part, also reaffirmed the goal of keeping global warming at 1.5°C above pre-industrial levels – a key demand of a number of countries.

But while the agreement marked a breakthrough in what was a contentious negotiating process, it did not advance language about cutting greenhouse gas emissions that warm the planet.

Nor did the final text mention a phase-out of fossil fuels, including oil and gas.

The final agreement marks the first time that countries and groups, including long-time holdouts like the United States and the European Union, have agreed to create a fund for nations vulnerable to climate disasters exacerbated by pollution from rich and industrialized countries.

Negotiators and non-governmental organizations observing the talks hailed the creation of the fund as a significant achievement after developing nations and small island states joined forces to pile on the pressure.

“The agreements reached at COP27 are a victory for our entire world,” AOSIS President Moloyne Joseph said in a statement. “We have shown those who have felt left out that we hear you, we see you, and we give you the respect and care you deserve.”

A senior Biden administration official told CNN that the fund will focus on what can be done to support losses and damages to resources, but does not include provisions for liability or compensation.

The United States and other developed countries have long sought to avoid such provisions that could expose them to legal liability and lawsuits from other countries. And in previous public remarks, US climate envoy John Kerry has said that losses and damages are not the same as climate compensation.

“‘Reparations’ is not a word or term that has been used in this context,” Kerry said on a final call with reporters earlier this month. He added, “We have always said that it is necessary for the developed world to help the developing world to deal with the effects of climate.”

Details about how the fund will operate remain murky. The script leaves a lot of questions about when it will be finished and running, and exactly how it will be funded. The text also mentions a transition committee that will help clarify those details, but it doesn’t set specific future deadlines.

And while climate experts celebrated the win, they also noted the uncertainty ahead.

“This loss and damage fund will be a lifeline for poor families whose homes have been destroyed, farmers whose fields have been destroyed, and islanders forced from their ancestral homes,” said Annie Dasgupta, CEO of the World Resources Institute. “At the same time, developing countries are leaving Egypt without clear assurances about how the Loss and Damage Fund will be supervised.”

Climate experts said the outcome on one of the funds this year came in large part because the bloc of the Group of 77 developing nations remained unified, putting more pressure on losses and damages than in years past.

“They needed to be together to force the conversation we’re having right now,” Nisha Krishnan, director of resilience at the World Resources Institute Africa, told reporters. “The coalition has endured because of this conviction that we need to stick together to make this happen — and advance the conversation.”

For many, the Fund represents a years-long victory, propelled over the finish line by the global attention given to climate disasters such as the devastating floods in Pakistan this summer.

“It’s been a huge buildup,” former US climate envoy Todd Stern told CNN. “This has been around for a long time and it gets worse in vulnerable countries because there is still not a lot of money being invested in it. We can also see the actual disaster impacts of climate change getting more and more severe.”

World scientists have warned for decades that warming should be limited to 1.5 degrees above pre-industrial levels — a threshold that is fast approaching as the planet’s average temperature has already risen to about 1.1 degrees.

Along with 1.5 degrees, the risks of severe droughts, wildfires, floods and food shortages will increase dramatically, scientists said in the latest report of the United Nations Intergovernmental Panel on Climate Change (IPCC).

But while delegates at the summit emphasized the goal of keeping global warming at 1.5°C, climate experts bristled at the lack of mention of fossil fuels, or the need to gradually cut them to prevent global temperatures from rising. As it did last year at the Glasgow summit, the text calls for a relentless phase-out of coal power, and the “phasing out of inefficient fossil fuel subsidies”, but goes no further than to call for the phase-out of all fossil fuels, including That’s oil and gas.

“The impact of the fossil fuel industry has been found across the board,” Lawrence Tubiana, CEO of the European Climate Foundation, said in a statement. The Egyptian presidency has issued a text that clearly protects the oil and gas countries and the fossil fuel industries. This trend cannot continue in the UAE next year.”

It took some dramatic action to hold on to the 1.5 score hit in Glasgow last year.

European Union officials on Saturday threatened to walk out of the meeting if the final deal failed to ratify the target of limiting temperature rises to 1.5 degrees Celsius above pre-industrial levels. At a carefully choreographed press conference, the EU’s green deal czar, Frans Timmermann, surrounded by a full line-up of ministers and other senior officials from EU member states, said that “there is no better deal than a bad deal”.

See also  The British say that 50,000 of the dead and wounded are Russians

“We don’t want 1.5C to die here and today. This is totally unacceptable for us.

Apart from the final agreement, the summit brought many other important developments including the resumption of formal climate talks between the US and China – the world’s two largest greenhouse gas emitters.

After China froze climate negotiations between the two countries this summer, US President Joe Biden and Chinese President Xi Jinping agreed to re-establish US-China contacts when they met last week at the G-20 summit in Bali, paving the way for US climate envoy John Kerry and. His Chinese counterpart Xie Zhenhua to officially meet again.

“Without China, even if the United States is as we move toward a 1.5-degree program, which is what we are if we don’t have China, no one else can achieve that goal,” Kerry told CNN last week.

The two sides met during the second week of the COP, trying to pick up where they left off before China suspended the talks, according to a source familiar with the discussions. The source said they focused on specific action points, such as promoting China’s plan to cut methane emissions — a powerful greenhouse gas — and the overall emissions target.

Unlike last year, there was no major joint climate declaration from the two countries. But the resumption of official contacts is seen as an encouraging sign.

“The challenge is that they must do more than just talk, [and] “Also need leadership,” Xu said, adding that the resumption of formal dialogue “helps prevent the worst outcomes.”