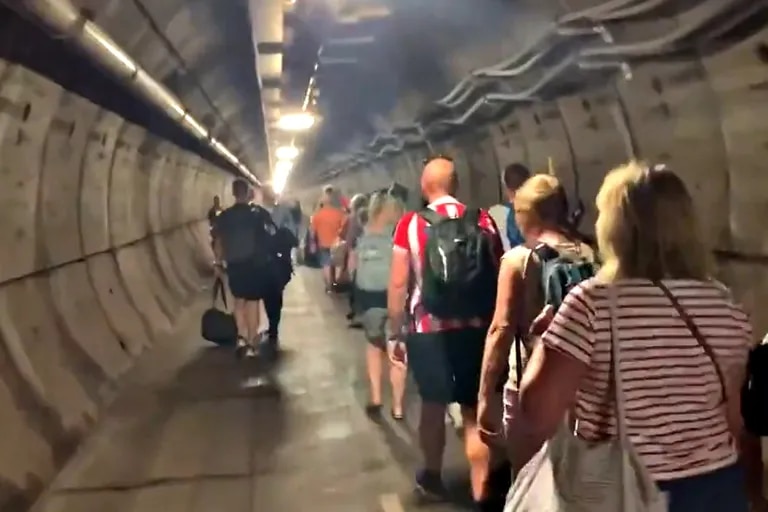 Panic attacks and crying: A terrible scene took place in Europe yesterday afternoon. Hundreds of passengers had to be evacuated from the Channel Tunnel A railway tunnel crossing the English Channel between England and France – due to an incident with a train. Ketlink said the situation caused several hours of traffic delays.

About 400 people had to leave the trainAccording to the company that manages the tunnel between the cities of Coquelles in the north of France and the city of Folkestone in the southeast of England.

According to company spokespersons, The incident took place due to an alarm in the train compartment.

Immediately, passengers must exit through the service tunnel normally used by maintenance personnel.

“One woman was crying in the subway, another woman traveling alone panicked”He described.

After spending five hours in the tunnel under the English Channel, passengers were transferred to a freight train. “I was on a train wreck. Now sitting on a freight train having trouble getting traction,” user Michael Harrison captioned his message on Twitter with a postcard of the situation.

“Five-and-a-half hours after leaving Calais I was waiting in the service tunnel,” said Kate Scott, then announcing her arrival at Folkestone. Due to this incident, there was heavy traffic jam in the tunnel.

For its part, John KeefeKetlink told reporters that passengers had been diverted to Folkestone in southeast England.

“Such operations take time, but they are done for everyone’s safety and must be done carefully.”Keefe noted.

The incident affected trains leaving Calais on Tuesday afternoon and trains from France were delayed for up to six hours.

The Channel Tunnel revolutionized travel between the UK and mainland Europe. Since its inception in May 1994. Travel was much faster than an equivalent ferry route.

The idea for the project was discussed 180 years before British and French workers began excavating each other in 1988.

In total, it took 13,000 workers six years to build the 50-kilometer tunnel, 37.8 kilometers of which run underwater. This makes it the longest in the world.

With information from AFP agency