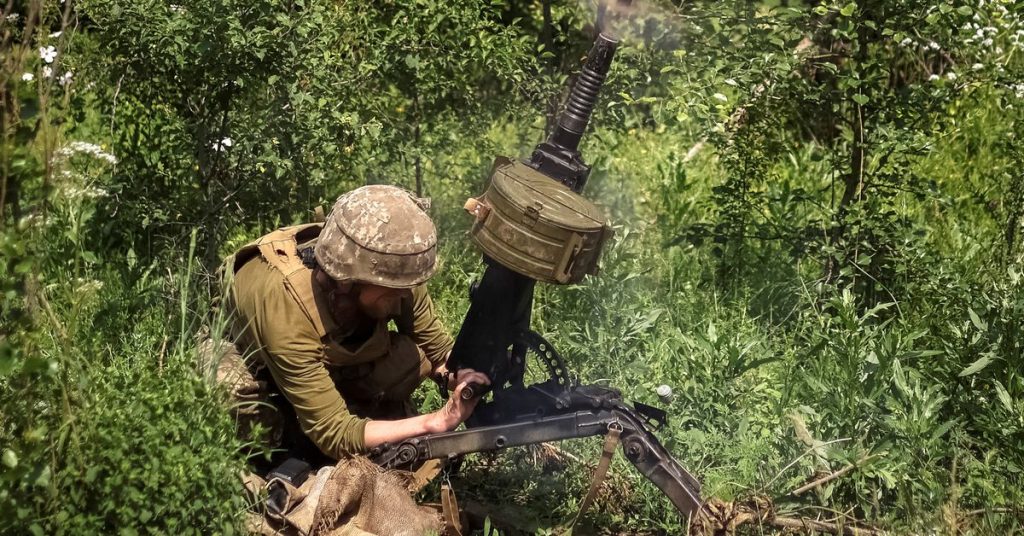 Kyiv (Reuters) – Ukrainian President Volodymyr Zelensky said Ukrainian forces were engaged in fierce street fighting with Russian soldiers in the industrial city of Severodonetsk in a pivotal battle in the Kremlin’s bid for control of the eastern Donbass region.

Severodonetsk became the main target of the Russian offensive in the Donbass, which includes Luhansk and Donetsk provinces, where the invasion continues in a war of attrition that has destroyed cities by artillery shells.

“In the city, fierce fighting continues in the streets,” the Ukrainian president said in his nightly video address on Monday.

“They outnumber us and they are stronger,” Zelensky told reporters at a news briefing. But he added that Ukrainian forces had “every opportunity” to respond.

Ukraine’s Defense Ministry said Russia was also throwing in troops and equipment in its effort to seize the largest Ukrainian-controlled city of Luhansk.

Luhansk Governor Serhiy Gaidai said earlier on Monday that the situation had deteriorated after the Ukrainian defenders ousted the Russians at the weekend as they looked close to victory.

Ukraine’s military said in its nightly update that civilians were killed in Russian shelling in the Donetsk and Luhansk regions on Monday, and that Russian forces had fired on more than 20 towns.

Reuters was not able to independently verify the battlefield reports. Russia denies targeting civilians in the conflict.

Russia says it is on a mission to “liberate” Donbass – which has been partly controlled by Moscow’s separatist proxies since 2014 – after Ukrainian forces pushed their forces from the capital, Kyiv, and Ukraine’s second city, Kharkiv, in the early stages of the war.

Russia invaded Ukraine on February 24, but described its move as a “special military operation” to eliminate what it sees as threats to its security. Ukraine and its Western allies describe this as a baseless excuse to launch a war to seize territory that could turn into a broader European conflict.

On Monday, the Ukrainian Defense Ministry said that Russian forces were also advancing towards Slovinsk, which is located about 85 km west of Severodonetsk.

“The enemy is also bombing near Lyman with the aim of destroying our defensive positions and advancing towards Sloviansk and Kramatorsk. There are bombings on Svyatorsk with the same aim,” he added.

Kirilenko said efforts are underway to evacuate people from several towns, some of which are under attack day and night, including Sloviansk, where there are still about 24,000 residents.

“People now understand, although it is late, that it is time to leave,” he said.

In a coordinated move with the United States, Britain said it would provide Ukraine with multiple launch missile systems that can strike targets 80 kilometers (50 miles) away, providing more accurate and long-range firepower to reach Russian artillery batteries. A key element in the plans for the Battle of Moscow.

Zelensky said that Kyiv was gradually receiving “specific anti-ship systems”, and that this would be the best way to end the Russian blockade of Ukraine’s ports on the Black Sea that prevents grain exports.

Russian President Vladimir Putin said on Sunday that Russia would hit new targets if the West provided long-range missiles. On the same day, Russian missiles struck Kyiv for the first time in more than a month.

The United States, which reopened its embassy in Kyiv in May after a nearly three-month shutdown, said the status of its embassy in the Ukrainian capital had not changed.

Western countries imposed unprecedented broad and severe sanctions on Russia because of its invasion.

On Monday, the Russian Foreign Ministry said it had imposed personal sanctions on 61 US officials, including the secretaries of treasury and energy, and senior defense and media executives. She added that the move came in response to the “continued expansion of US sanctions.” Read more