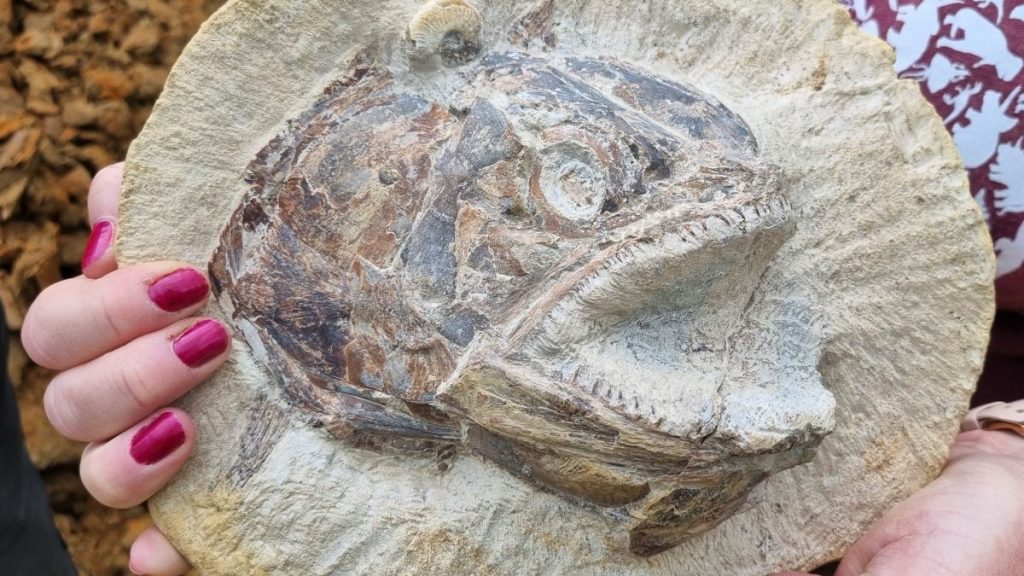 A farm in England was the unlikely source of a Jurassic prize: a treasure trove of 183-million-year-old fossils. On the outskirts of Gloucestershire in the Cotswolds, beneath soil that is currently trampled under cattle hooves, researchers recently discovered the fossilized remains of giant fish and marine reptiles called ichthyosaurs, squid, insects and other ancient animals dating back to the early part of the Jurassic period (201.3 million to 145 million years ago).

Among the more than 180 fossils recorded during excavation, one notable specimen was a preserved three-dimensional fish head belonging to the Pachycormus, an extinct genus of ray-finned fish. The fossil, which the researchers found embedded in a knot of hardened limestone outside the clay, was very well preserved and contained soft tissue, including scales and an eye. The 3D nature of the specimen’s head and body position was such that the researchers could not compare it to any other previous discovery.

“The closest we can think of is a Bigmouth Billy Bass,” said Neville Hollingworth, a field geologist at the University of Birmingham, who discovered the site with his wife Sally, fossil preparer and fossil coordinator. “The eyeball and socket are well preserved,” Hollingworth said. “Normally, with fossils, they lie flat. But in this case, they have been preserved in more than one dimension, and the fish appears to be jumping off the rock.” Live Science.

“I’ve never seen anything like this before,” Sally Hollingworth added. “You can see the scales, the skin, the spine – even the eyeball is still there.”

This scene so startled the Hollingworth family that they contacted ThinkSee3D, a company that produces digital 3D models of fossils, to create (Opens in a new tab)3D interactive picture (Opens in a new tab) of fish to help bring them back to life and allow researchers to study them more closely.

Related: A huge tomb of alien-like sea creatures has been discovered in ‘Jurassic Pompeii’ in central UK

Most of the fossils found by Hollingworth and a team of scientists and specialists were found behind the cowshed on the farm. (The farm is home to a herd of English longhorns – a British breed of long-horned, curved cows – many of whom have been keeping a close eye on the excavations.)

“It’s been a bit annoying digging when a herd of longhorns is watching you,” Sally Hollingworth told Live Science.

At one point this region of the United Kingdom was completely submerged by a shallow tropical sea, and it is likely that sediments there helped preserve the fossils; Neville Hollingworth described the Jurassic beds as slightly horizontal, with layers of fine clay beneath a crust of hardier limestone layers.

“When the fish died, it sank to the sea floor,” said marine fossil reptile specialist Dean Lomax, a visiting scientist at the University of Manchester in the UK and a member of the excavation group. “As with other fossils, minerals from the ocean floor are constantly replacing the original structure of the bones and teeth. In this case, the site shows that there was very little or no excrement, so it would have to be buried quickly by the sediments and once they reached the bottom The sea was immediately covered and protected.”

During their four-day drilling earlier this month, Neville Hollingworth said the eight-person team used a backhoe to dig 262 feet (80 meters) through the banks of the grassland, “to pull the layers back to reveal a tiny fraction of geologic time.” A number of diverse specimens dated to the Taurasian period (a phase of the Jurassic period that occurred between 183 million and 174 million years ago) and included belemnites (extinct as cephalopods), ammonites (extinct cephalopods), bivalves and snails, in addition to fish and other marine animals.

“It is important that we can compare these fossils to other fossil sites of the Tuarsi period, not only in the UK but also across Europe and possible sites in America,” Lomax said. He cited the Strawberry Bank Lagerstätte, an early Jurassic site in southern England, as an example.

The group plans to continue studying the samples and is working to publish the results. Meanwhile, a selection of the museum’s fossils will be on display in the garden at Stroud.