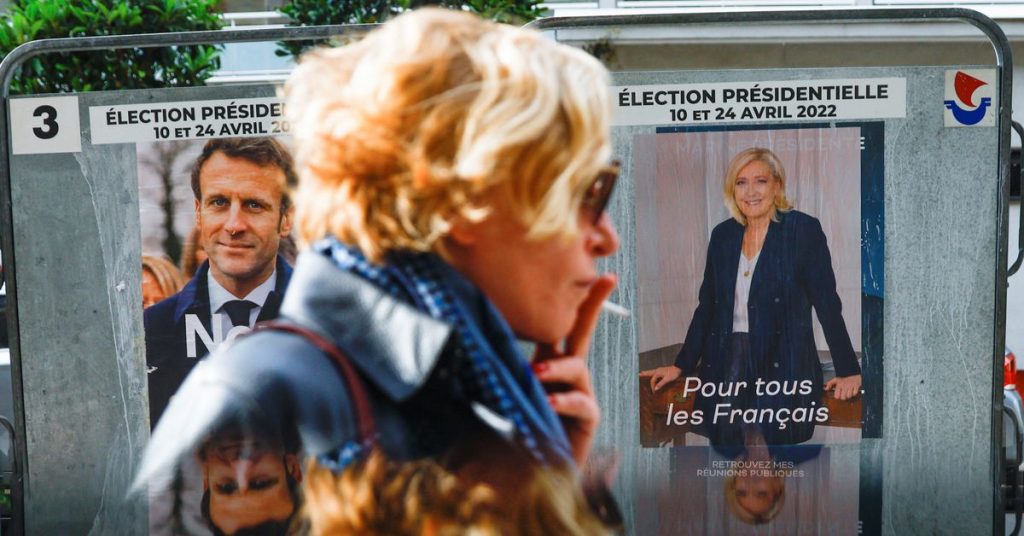 PARIS (Reuters) – French President Emmanuel Macron and his far-right rival Marine Le Pen will face off on Wednesday night in their only debate ahead of Sunday’s presidential election.

For Le Pen, who lags behind Macron in voter polls, the long-awaited standoff is an opportunity to convince voters she has the standing to be president, and they shouldn’t be afraid to see the far right in power.

For Macron, perhaps the biggest challenge he faces in maintaining his growing lead in the polls is not to appear arrogant – something many voters have criticized for – while scrutinizing the holes he sees in Le Pen’s political plans.

Arriving at the television headquarters, Le Pen said she was “relieved”, while Macron said he was “focused and ready for a discussion that allows each of us to explain our ideas to France”.

A poll by OpinionWay-Kea Partners for Les Echos newspaper showed that about 14% of voters are waiting for a debate to decide who they will vote for, while 12% said it will be crucial to whether they vote at all.

But sources on both sides said they wanted a quiet discussion so much that a source close to Macron, familiar with the preparations for the discussion, said it might be “boring”.

“The president should show toughness… without sounding arrogant,” the source said. “It will be very serious, and she also has to show the toughness of the core.”

A source close to Le Pen said she wanted a “quiet discussion, project versus project”.

If the two-and-a-half-hour debate continues in this way, it will be very different from the 2017 meeting, when Le Pen’s presidential challenge unraveled as her notes got mixed up and she lost her ability to cope.

The prime-time controversy on that occasion cemented Macron’s status as the front-runner.

But Macron is no longer the source of foreign policy turmoil and now has a record of the job that Le Pen could attack. In the meantime, she engaged with ordinary voters and worked hard to soften her image.

“He’s no longer the same opponent,” Le Pen said. “Now he’s been in power for five years and it wasn’t the case last time.”

A source close to Macron said: “The French are looking at her now as a potential president, unlike what happened in 2017. It’s up to us to prove that she would be a bad president.”

Financial markets are more optimistic about the election than they were five years ago, and the odds presented by British political bookmakers on Wednesday suggest there is a 90% chance of Macron winning. Read more

However, Emmanuel Kao, head of European equity strategy at Barclays, cautioned against inaction among investors.

“A belated turnover cannot be ruled out given the large number of hesitant voters,” he wrote in a note.

After more than half of voters voted for candidates of the far-right or far-left in the first round, Macron’s lead in opinion polls was much narrower than it was five years ago, when he beat Le Pen with 66.1% of the vote. Voter polls on Wednesday predicted he would win 55.5-56.5% this time.

Moreover, Le Pen could not do better than in the 2017 debate, which she herself described as a failure, while it may be difficult for Macron to repeat such a losing performance.

But Macron is not without origins in this debate.

With far-right critic Eric Zemore now out of the game, Le Pen lost a rival who made her appear less extreme, by comparison, and that beat her in the polls.

Unemployment is at a 13-year low, and the French economy has outperformed other large European countries – even if inflation is chomping at it.

And while she has so far largely managed to put the matter aside, Le Pen has her former admiration that Russian President Vladimir Putin is working against her.

Bringing the issue back to the fore, imprisoned Kremlin critic Alexei Navalny urged French voters to support Macron over Le Pen’s ties to Moscow. Meanwhile, Ukrainian President Volodymyr Zelensky told BFM TV that he did not want to lose the relationship he built with Macron.