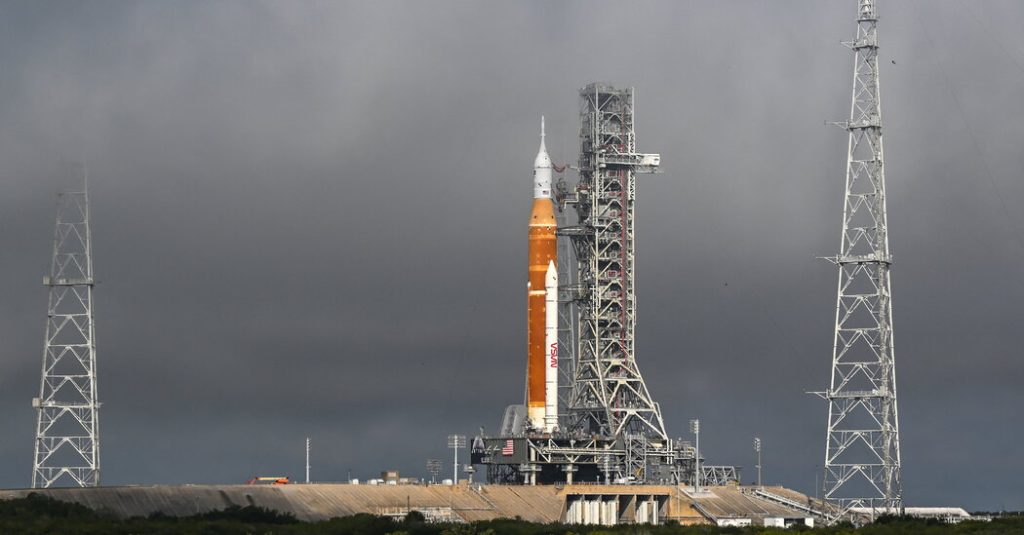 NASA’s new Big Moon rocket is back in the garage for some small repairs, and may postpone its first launch to late summer or later.

That means NASA is giving up, for now, on trying to complete what it calls a rehearsal for the rocket — a detailed countdown exercise called “wet” because it involves loading more than 700,000 gallons of liquid hydrogen and ultra-cold liquid oxygen into the rocket’s fuel tanks.

For the past month, the rocket, called the Space Launch System, has sat on the launch pad at the Kennedy Space Center in Florida as it undergoes ground-based systems testing. The auditions were to culminate in a wet rehearsal.

However, three attempts to perform this exercise ended early due to a variety of technical glitches during the countdown. The purpose of training on a new missile system is to identify and fix these problems.

Technicians also discovered that a valve in the upper stage was malfunctioning, and on the third attempt last Thursday the test was modified so that only the fuel tanks would be filled in the boost stage. But then a hydrogen leak was detected in the so-called secret tail service shaft that connects to the bottom of the rocket, and the rehearsal was cleared. The oxygen tank was not half full, and the hydrogen fueling had just begun.

Last week, NASA officials said they hoped to fix the hydrogen leak while the rocket was still on the launch pad. But on Monday they said they had changed their minds. Next week, the rocket will be returned to the Vehicle Assembly Building, where technicians can easily access parts of the rocket. This will allow the faulty upper stage valve to be replaced.

At the same time, an off-site vendor that supplies nitrogen gas – used to purge hazardous gases – is upgrading their systems. During two of the training attempts, disturbances in the nitrogen supply delayed the countdown.

“The massive moon rocket is doing very well,” said Tom Whitmaier, NASA’s deputy associate administrator for Joint Exploration Systems Development, during a press conference Monday. “I think we got really smart with this missile. But we have a lot more work to do.”

The Space Launch System, a key component of NASA’s Artemis program to send astronauts to the Moon, is years behind schedule and a budget of billions of dollars. With recent problems, Mr. Whitmaier said, getting the missile ready in time for launch during a two-week window in early June would be challenging. There are additional two-week opportunities starting in late June and late July.

“We are currently working on two different schedule options that we will be reviewing with the management team over the course of the week,” said Charlie Blackwell Thompson, launch director.

One would be to make the minimal repairs needed—the upper stage valve and hydrogen leak—and get back to the operating panel as quickly as possible to do a wet workout. The second option will include some additional work needed to get the missile ready for launch. Both options will require another trip back to the Vehicle Assembly Building.

The third option is to make the rocket completely ready for launch, and then conduct both rehearsal and launch without another flight to the building.