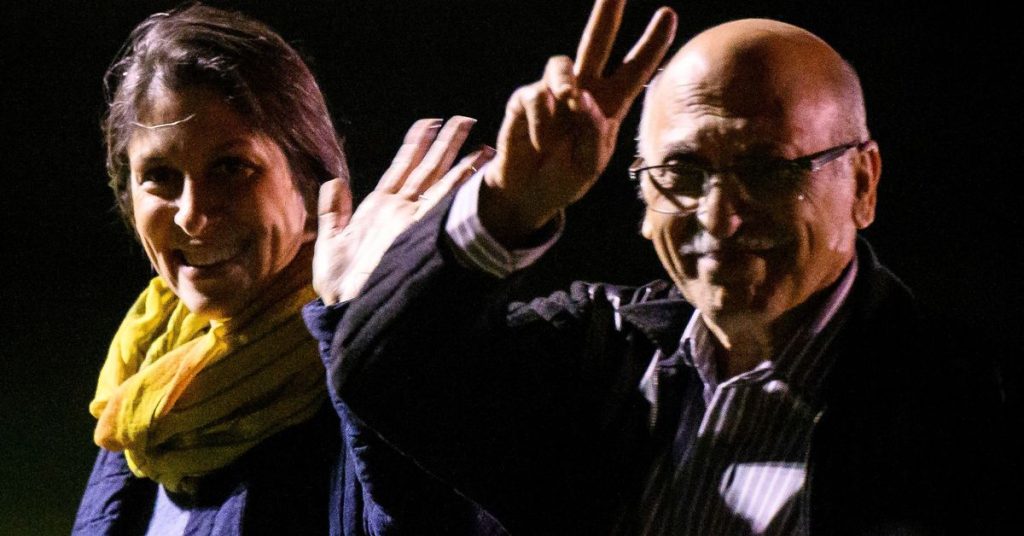 British-Iranian aid worker Nazanin Zaghari-Ratcliffe and Anousha Ashouri arrived in Britain from Iran on Thursday, ending an ordeal that turned into a bargaining chip in Iran’s talks with the West over its nuclear programme.

They arrived at Brize Norton British Military Air Base in Oxfordshire, shortly after 1 am local time, after returning via a short layover in Amman. They got off the plane together, smiled and waved as they entered the terminal building.

“It’s been a really tough 48 hours,” British Foreign Secretary Liz Truss said shortly after Zaghari-Ratcliffe and Ashouri arrived at the base. “The expectation was that they would be released, but we weren’t sure until the last minute, so it was very emotional but also a happy moment for the families.”

“I am pleased to confirm that the unjust detention of Nazanin Zaghari-Ratcliffe and Anousha Ashouri in Iran has ended today, and they will now return to the UK,” Johnson said in a tweet.

Zaghari-Ratcliffe’s husband, Richard, said the long ordeal appears to have finally come to an end. “It’s just the idea that we can go back to being a normal family, that we don’t have to keep fighting, that this long journey is coming to an end,” he told Reuters outside his London home before his wife landed.

A statement from the Ashouri family thanked everyone who worked for his release. “1672 days ago, the foundations of our family were shaken when our father and husband were unjustly arrested and taken from us.

“Now, we can look forward to rebuilding those same foundations with the cornerstone back in place.”

Antonio Zabula, chief executive of the Thomson Reuters Foundation, Zaghari-Ratcliffe’s employer, said her release was “a ray of light and hope” at a time when the world was in turmoil. The Foundation is a charitable organization that operates independently of Thomson Reuters and its news arm, Reuters.

In February, as months of talks on reviving the 2015 nuclear deal neared a deal, Iran, which is holding dozens of people with Western dual citizenship, said it was ready to exchange prisoners in exchange for lifting the embargo on frozen assets and the release of the detained Iranians. in western prisons.

The nuclear talks were on the verge of a deal 11 days ago when last-minute Russian demands for comprehensive guarantees that would rescind sanctions imposed after its invasion of Ukraine derailed negotiations.

Diplomats say Russia now appears to have narrowed its demands to only include work related to the nuclear deal, leaving a small number of issues to be resolved between Washington and Tehran.

See also  Ukraine: The attack on Kyiv was Putin's "middle finger" to the United Nations

Iran’s clerical rulers say Britain owes Iran 400 million pounds ($520 million), which the former Iranian monarch, the Shah, paid for 1,750 tanks and other vehicles, almost none of which was delivered after the 1979 Islamic revolution toppled the backed armed forces from the United States. Leader.

Truss said Britain was studying ways to repay the debt.

“We have the deepest admiration for the determination, courage and determination shown by Nazanin, Anousha, Murad and their families,” she said in a statement. “They have faced hardships that no family should experience, and this is a moment of great comfort.” statment.

“In parallel, we also settled the IMS debt, as we said we would,” she added, referring to the military equipment debt. It added that the debt had been fully settled in line with international sanctions imposed on Iran, and that the funds would be hedge to buy “humanitarian goods”.

Iran’s top diplomat, Hossein Amirollahian, said on Wednesday that Britain had paid its debts a few days ago, denying any link between the payment and the release of prisoners.

Zaghari-Ratcliffe’s protracted difficulties began with her arrest by the Revolutionary Guards at Tehran airport on 3 April 2016, while trying to return to Britain with her 22-month-old daughter Gabriella after visiting an Iranian New Year with her parents.

Later, an Iranian court convicted her of plotting to overthrow the religious establishment. Her family and the foundation denied the charge.

Ashouri was sentenced to 10 years in prison in 2019 for spying for the Israeli Mossad and two years for “obtaining illegal funds,” according to the Iranian judiciary.

The Thomson Reuters Foundation said Zaghari-Ratcliffe had traveled to Iran in her personal capacity and was not working in Iran.