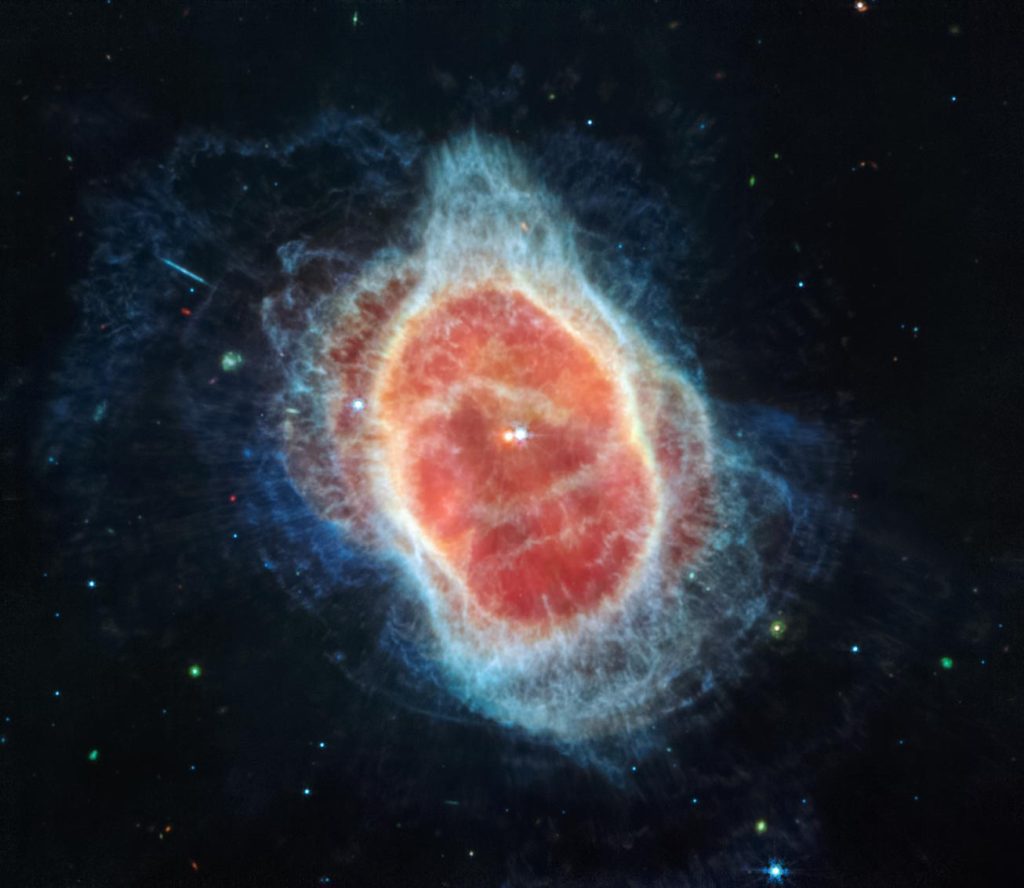 The first images of a nebula from the James Webb Telescope gave astronomers remarkable insights into the death of the star that created these beautiful haloes of gas and dust.

Around 2500 years ago, a star ejected most of its gas, forming the beautiful Southern Ring Nebula, NGC 3132, chosen as one of the first five image packages from the James Webb Space Telescope (JWST).

Led by Australia’s Macquarie University, a team of nearly 70 astronomers from 66 organizations across Europe, North, South, and Central America, and Asia used the Webb images to piece together the messy death of this star.

“It was nearly three times the size of our Sun, but much younger, about 500 million years old. It created shrouds of gas that have expanded out from the ejection site, and left a remnant dense white dwarf star, with about half the mass of the Sun, but approximately the size of the Earth,” says Professor Orsola De Marco, lead author on the paper, from Macquarie University’s Research Centre for Astronomy, Astrophysics and Astrophotonics. “This was a star that lived fast and died young, compared to our five-billion-year-old Sun that is unlikely to eject its own planetary nebula for another five billion years.”

NASA’s Webb Telescope has revealed the cloak of dust around the second star, shown at left in red, at the center of the Southern Ring Nebula for the first time. It is a hot, dense white dwarf star. As it transformed into a white dwarf, the star periodically ejected mass – the shells of material you see here. As if on repeat, it contracted, heated up – and then, unable to push out more material, pulsated. This Mid-Infrared Instrument (MIRI) image also offers an incredible amount of detail, including a cache of distant galaxies in the background. Most of the multi-colored points of light are galaxies, not stars. Tiny triangles mark the circular edges of stars, including a blue one within the nebula’s red bottom-most edges, while galaxies look like misshapen circles, straight lines, and spirals. Credit: NASA, ESA, CSA, STScI

“We were surprised to find evidence of two or three companion stars that probably hastened its death as well as one more ‘innocent bystander’ star that got caught up in the interaction,” she says.

It paves the way for future Webb observations of nebulae, providing insight into fundamental astrophysical processes including colliding winds, and binary star interactions, with implications for supernovae and gravitational wave systems.

The paper was published on December 8 in the journal Nature Astronomy.

The bright star at the center of NGC 3132, while prominent when viewed by NASA’s Webb Telescope in near-infrared light (using NIRCam), plays a supporting role in sculpting the surrounding nebula. A second star, barely visible at lower left along one of the bright star’s diffraction spikes, is the nebula’s source. It has ejected at least eight layers of gas and dust over thousands of years. But the bright central star visible here has helped “stir” the pot, changing the shape of this planetary nebula’s highly intricate rings by creating turbulence. The pair of stars are locked in a tight orbit, which leads the dimmer star to spray ejected material in a range of directions as they orbit one another, resulting in these jagged rings. Credit: NASA, ESA, CSA, STScI

“When we first saw the images, we knew we had to do something, we must investigate! The community came together and from this one image of a randomly chosen nebula we were able to discern much more precise structures than ever before. The promise of the James Webb Space Telescope is incredible,” says De Marco, who is also president of the International Astronomical Union Commission on Planetary Nebulae.

Astronomers gathered online and developed theories and models around the mid-infrared image to reconstruct just how the star had died.

Shining at the center of the nebula is an ultra-hot central star, a white dwarf that has burned up its hydrogen. “This star is now small and hot, but is surrounded by cool dust,” said Joel Kastner, another team member, from the Rochester Institute of Technology USA. “We think all that gas and dust we see thrown all over the place must have come from that one star, but it was tossed in very specific directions by the companion stars.”

There are also a series of spiral structures moving out from the center. These concentric arches would be created when a companion orbits the central star while it is losing mass. Another companion is further out and is also visible in the picture.

Looking at a three-dimensional reconstruction of the data, the team also saw pairs of protuberances that may occur when astronomical objects eject matter in jet form. These are irregular and shoot out in different directions, possibly implying a triple star interaction at the center.

De Marco says: “We first inferred the presence of a close companion because of the dusty disk around the central star, the farther partner that created the arches and the super far companion that you can see in the image. Once we saw the jets, we knew there had to be another star or even two involved at the center, so we believe there are one or two very close companions, an additional one at middle distance and one very far away. If this is the case, there are four or even five objects involved in this messy death.”