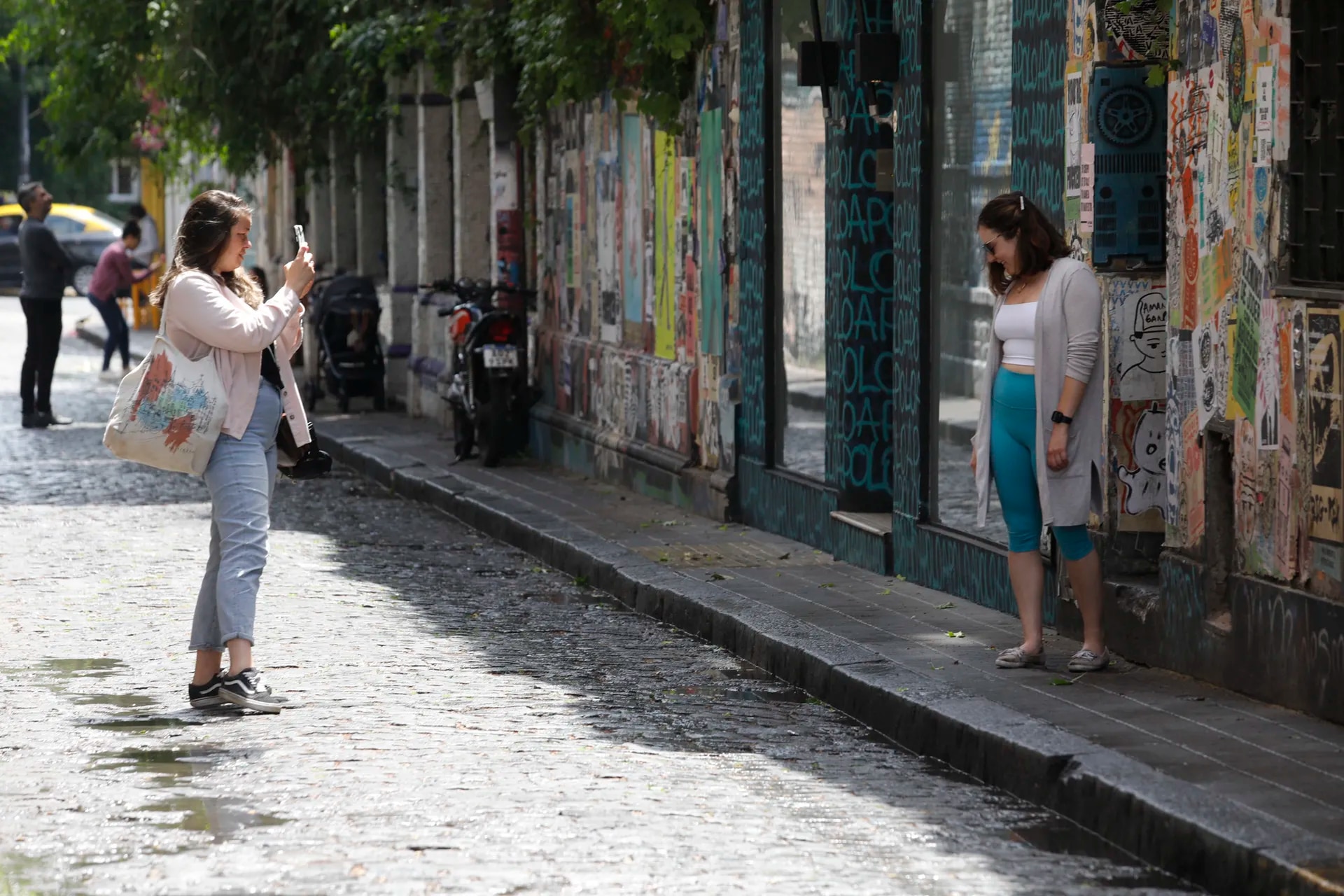 “A peak every seven seconds, one for every bite,” an American tourist was heard to say. “Because of the texture, the most delicious inner muscle fat, the width of the rib eye, because there’s marbled fat all over the piece,” explains Don Julio’s manager, who warned him. In 2021 This grill is ranked 13th 50 Best Restaurants in the WorldY The attraction of foreign tourism, especially Brazilian and American, it was immediate. Today it is the center, with Tres Monos Bar and Nino Gordo “Oriental Grill”—all on the Guatemala/Thames axis—of the tourist movement that has changed the face and cost of living of Palermo Soho.

According to bar owners, staff, tourists, neighbors, kiosks and restaurant and hotel managers advise. Nation Inside Scalabrini Ortiz, Juan B. Justo, lot between Córdoba and Santa Fe avenues, Buenos Aires tourism manages “with money”; Spend an average of $70 on lunch or dinner; Brazilians report paying $200 for the same type of restaurant in São Paulo and Brasilia. Buenos Aires offers them the opportunity to experience luxury.

Mario and Milena Sampaio from Brasilia marvel at the two-hour line for Don Julio one afternoon on the corner of Guatemala 4691: “Palermo Soho, quiet streets; Looks like the Pinheiros district in São Paulo.

Carlos Aquinas is a founding partner of Tres Monos bar He made it to the world’s top 100 list in a single year-The body that elects them consists of more than 600 secret voters, including bar owners and bartenders, journalists and ordinary drinkers. They vote for seven bars anywhere in the world, on broad criteria that include impact on society. Here, they are dedicated to “the most Argentinian flavors and the inspiration of local producers” because they buy rica-rica, mun-muna and arca, among other herbs, from producers in Juju, and they make cocktails.

Sorrel Mosley-WilliamsJournalist and sommelier in Buenos Aires Academy Chair Promoted to the “World’s 50 Best Bars” list Thames Street is one of the 10 best streets in the worldto the press Time is up From London. The names of Niño Gordo (Thames 1810), Tres Monos (Guatemala 4899), Las Pizarras (Thames 2296) and La Carnicería (Thames 2317) immediately began to be reflected in hundreds of web pages and worldwide guides. Tourism traffic reached unprecedented levels that still amaze them today.

According to the staff of the bars visited, tourists start drinking very quickly in Palermo Soho; They have lunch at Don Julio or El Preferreddo, and by 2:30pm (roughly) they’re already having drinks. “We know we can charge them a higher price – Acwinsky admits – but we want the door to be open; that membership is not Dress code”.

A famous bartender on a street in Guatemala, says the Argentinian, is the most used to snacking on something. The foreigner takes five drinks and must not eat an olive. It’s a cultural issue. And the locals have a sweet taste. Brits and North Americans try to feel more alcohol in an Old Fashioned, Negroni or Manhattan.

Sandra, a saleswoman at the Palermo Food Market (Thames 1732), reveals that most of her tourists are, in order, Chilean, American, and Spanish. It is people who “come to the walk of Plaza Serrano; They want to pick up Argentinian wines at the best prices. It all started with a kiosk and wines, and items were added at people’s request: charcoal, toothpaste, talcum powder, noodles, yerba mate, bread, sugar, milk, “whatever you need,” he says.

At the door of the store, one of his customers, a fellow Mexican scientist, Guillermo says: “I don’t understand why this isn’t a first-world country with such a solid public education system. And these wines! I was struck by the degradation of the cars.

How do tourists to Buenos Aires behave? Employees of bars, pubs and hamburger joints say it’s more respectful and comes with information. At La Carniceria, 90 percent of the foreign public attends, says Manuela Toro, operations manager of Grupo Temesis. “Two months after opening, in 2015, some guys from The New York Times went to eat and got a dedication note. It blew up. Today the same owners have five restaurants on Thames Street.

See also  He described how much he spends a month in Miami and generated all kinds of reactions among his followers: "It's impossible!"

In a few days, Sorrel Moseley-Williams expects, a new list of the world’s 50 best restaurants will be announced (at a special event in Mérida, Mexico) and there will certainly be new additions from Buenos Aires. Yet another powerful tourist wave will attract. “A well-travelled man arrives in Buenos Aires – describes Sorrel – and is surprised that it is cheaper than he imagined”.

Sebastian and Pilar from Magia Libros (Thames 1619) receive tourists who take four or five titles, which they buy in numbers, because in the rest of Latin America they pay taxes and each copy must add up to 10 to 12 dollars. “There is consumer tourism; That is very clear,” says Sebastian.

The couple draws some conclusions after listening to their customers from the outside: “The clothes seem too expensive to them; They come with the information that they don’t have to take the cloth from Buenos Aires. They are very cheap to eat and drink and buy books.

The average tourist buying books? “He was 45 to 55; She is a woman, well employed; The head of the family, or Digital NomadA person who earns $2,500 and lives longer in America airbnbAnd living a great life”, both booksellers agree.

In the local Niño Corto, the visitor is said to be a middle and upper middle class tourist. “The Argentinian customer comes from Tuesday to Thursday during the week. There is only one Argentinian on staff; the rest are from Venezuela, Peru, Ecuador, Colombia and Haiti. It helps to communicate with tourists,” says the second chef.

See also  She was sunbathing on a beach in South Carolina when an umbrella blew up and killed her.

From Brazil, she was invited by the São Paulo Secretary of Tourism, during a visit to the MESA gastronomic fair, declares Sorrel Mosley-Williams. Zacharyta has just been enshrined in Time Out among the best 51 different teams in the world, which will lead to a broader map for tourism. “I try to supply my grain to the region,” he says humbly.

Most recently, Sorrel enshrined El Preferido at No. 4 on Fodor’s “Good Cheap Eats Around the World” ranking. The crowd turning the Borgian corner, from then on, looks even more colorful. They wait up to three hours for a table. They respond instantly to rankings.

Among those waiting is Julio Castro, from Rio de Janeiro, who says he loves Palermo Soho and that’s why he waited two hours with his partner, Walter. He admitted to visiting 16 bars and restaurants in his first 48 hours on Buenos Aires soil.

Outside a popular beer hall, waiters describe the crowd: “A bunch of Yankees drinking six pints a night; They are cheeky; They talk terribly spanglish”. In Palermo Soho, you risk being a tourist and being reduced to the outline of a bubble that doesn’t allow you to see beyond. A young writer from Brazil recently said he was struck by the lack of social diversity in Buenos Aires, according to the folks at Magia Libros. But he never left the confines of Palermo Soho. “The Internet is perverse – described Pilar -: it sends them to Palermo. To the best bar in Palermo. It’s not touristic tourism; it’s tourism of points”.