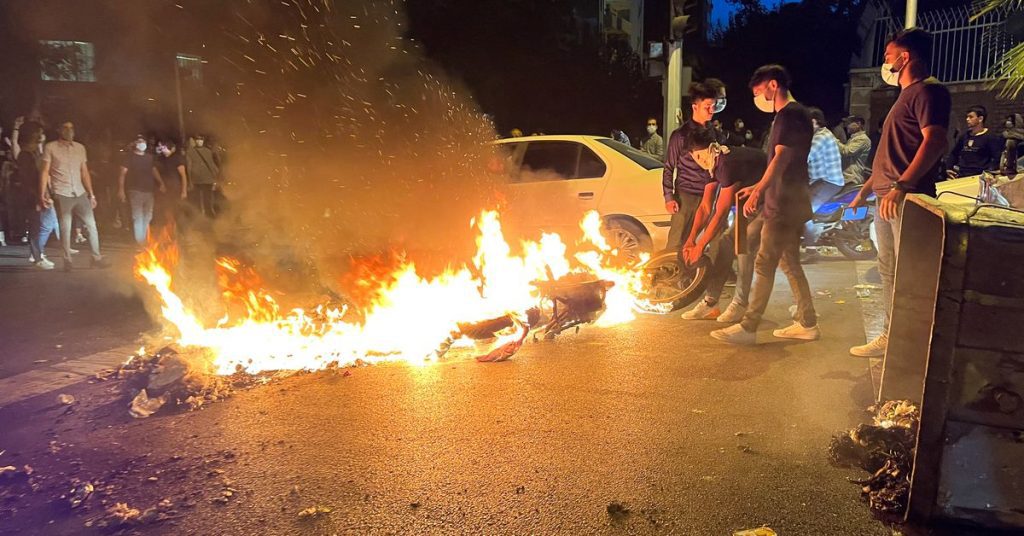 DUBAI (Reuters) – Protesters rallied across Iran and strikes were reported across the country’s Kurdish region on Saturday, as protests sparked by the death of a woman in police custody entered their third week.

The protests, which erupted after the death of 22-year-old Mahsa Amini from Iranian Kurdistan, have escalated into the largest display of opposition to Iran’s religious authorities since 2019, with dozens killed in unrest across the country.

People in London, Rome, Madrid and other western cities also demonstrated in solidarity with Iranian protesters carrying pictures of Amini, who died three days after his arrest by the morality police of the Islamic Republic for “improper dress”.

In Tehran’s traditional Bazaar business district, anti-government protesters chanted “We will kill one by one if we don’t unite,” while elsewhere they blocked a major road with a fence torn off from the central reserve, videos widely disseminated as a Twitter account Tavsir1500 showed.

Students also demonstrated in many universities. Tafsir 1500 said Tehran University had detained dozens. The semi-official Fars news agency said some protesters were arrested in a square near the university.

A video posted on social media showed protesters giving flowers to riot police in Tehran, a recreation of Iranians defeating the army on their side in the 1979 Islamic Revolution.

Reuters was unable to verify the social media reports.

The protests began at Amini’s funeral on September 17 and spread to 31 Iranian provinces, with the participation of all strata of society, including ethnic and religious minorities, and many calling for the overthrow of Supreme Leader Ayatollah Ali Khamenei.

Amnesty International said that the government crackdown on the demonstrations has so far killed at least 52 people and injured hundreds. Rights groups say dozens of activists, students and artists have been arrested.

In London, about 2,500 people, many of them Iranians, staged a noisy protest in Trafalgar Square. A crowd of dozens in Paris raised Iranian flags and pictures of the victims who died in the protests. And in Madrid, an Iranian woman cut her hair during a protest attended by dozens of people, echoing demonstrations in Iran where women have also been waving and burning veils during the demonstrations.

Iran’s currency has approached historic lows reached in June as desperate Iranians bought dollars to protect their savings, amid little hope of reviving Tehran’s nuclear deal with world powers and concerns about the economic consequences of the unrest.

Iranian authorities say several members of the security forces have been killed, accusing the United States of exploiting the unrest to try to destabilize Iran.

The Revolutionary Guards said four members of its forces and volunteers from the Basij militia were killed on Friday in attacks in Zahedan, the capital of the southeastern province of Sistan-Baluchestan.

The authorities blamed a separatist group from the Baloch minority for starting the exchange of fire in Zahedan. State media said two prominent gunmen linked to that group were killed.

And the Iranian Islamic Republic News Agency (IRNA) published a video clip showing destroyed cars and a trailer or an overturned and burned bus and fires in burnt buildings and shops, describing it as footage of “what the terrorists did to people’s shops last night in Zahedan.”

Reuters was unable to verify the footage.

The protests have been particularly intense in Iran’s Kurdistan region, where authorities have previously quelled unrest by the Kurdish minority of up to 10 million.

Shops and businesses have gone on strike in 20 cities and towns in the northwest of the country in protest against the attacks by Iran’s Revolutionary Guards on armed Kurdish opposition parties in Iraq, the Kurdish rights group Hengao reported.

Fearing an ethnic uprising and in a show of force, Iran launched missile and drone attacks on targets in Iraq’s Kurdish region this week after accusing Iranian Kurdish opponents of involvement in the unrest.

A prominent member of the Iranian opposition Kurdish Komala Party told Reuters that two offices of the party in Jabal Halgurd in Erbil were subjected to Iranian bombardment.