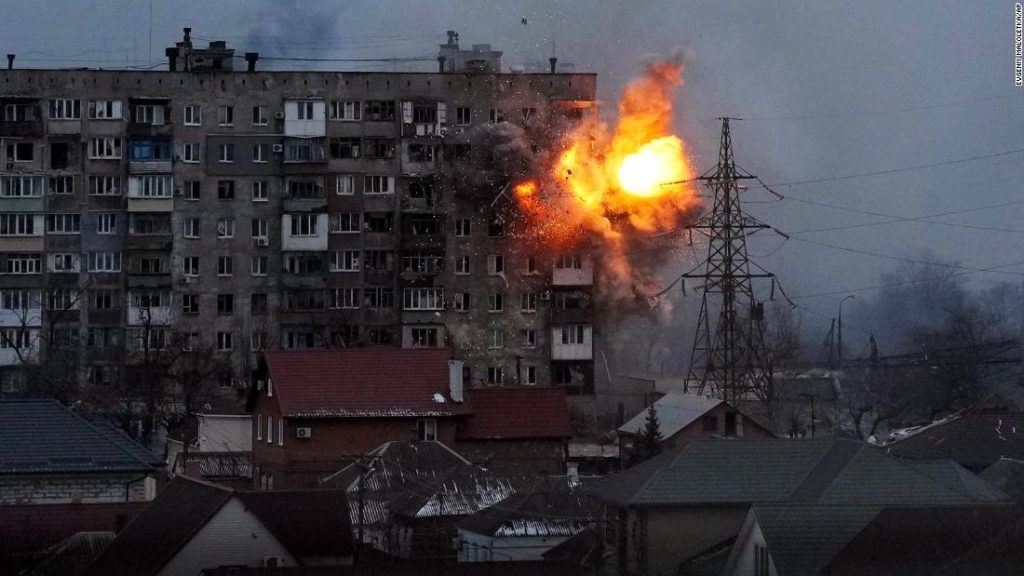 A large area of ​​Makarev, a village 30 miles west of Kyiv, was badly damaged apparently by Russian air raids.

CNN has geolocation and verified photos posted on social media on Saturday, which show extensive damage to apartment complexes, schools and medical facilities.

A stark photo of Makarev shows a large hole in the north wall of an apartment building. Many of the buildings in the photos had damage to their northern facades, evidence indicating that the military strikes that hit them were Russian.

A few hundred meters east of that apartment building, a kindergarten was badly damaged.

Smoke could still be seen billowing from the building, the roof had completely collapsed and the windows had been blown out completely.

The Russian Defense Ministry has repeatedly claimed that it does not target civilians.

In another apartment building to the west of the school, another photograph shows the roof and a number of upper-story residences destroyed.

Just south of the school, the Adonis-Mariev Center for Medicine and Diagnostics is seen on fire. Rubble was scattered on the street in front of him, and windows flew out from the center.

A photo taken on the street in front of the center showed that the debris in front of it was all that was left of the building’s north-facing front facade.

Immediately west of the school and medical center, near the center of Makarev, a huge pothole was noticed in the road. The medical center can be seen in the background on fire. Next to that hole, another photo shows an apartment building with a grocery store on the ground floor that was hit.

In the city center, a cultural center that also houses government and police offices has been on strike. Part of the building was destroyed and one of the buildings on the roof appeared to have been mowed down with some kind of ammunition.

“Glory to Ukraine! Glory to the heroes” was written on a large banner at the front of the building.

South of central Makarev, one of the nurseries was severely damaged. The windows were shattered and parts of the roof appeared to have been damaged.