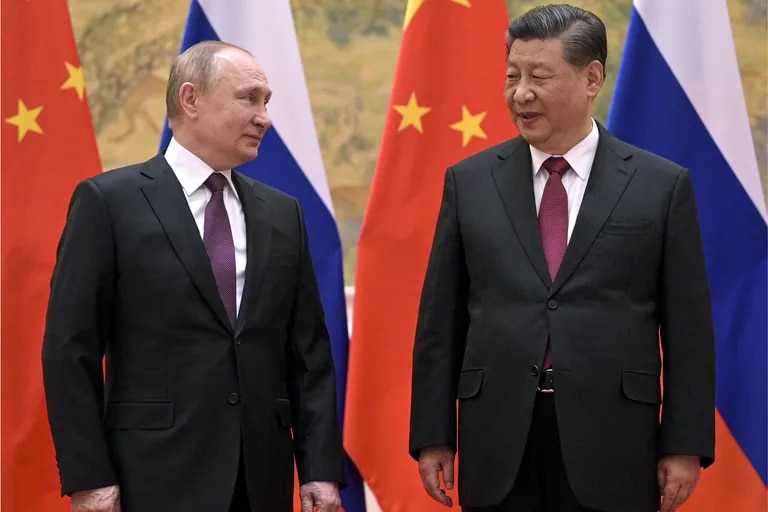 Paris – Europeans and Americans are doing everything they can to prevent it War in Ukraine It turns into a confrontation between Russia and the West. Moscow dreams of turning its foolish gesture into the arrival of a new world order.

Beyond the fighting and suffering of the Ukrainian people, for European and North American leaders this is the real danger posed by the prolongation of the unleashed conflict. Vladimir Putin On February 24th. As many votes since the invasion began, Moscow may have been sidelined at the United Nations. However, the Kremlin presents this conflict as a dual conflict between Russia and the Western world.

Moscow, with its powerful propaganda machine, is spreading discourse maps on social media seeking to deny the reality of Russian isolation: Good relations between Russia, India and China (RIC) Russian dictatorship is making every possible effort – presented as the focal point of a new world order, affected by the return of war on a continent to Washington and its European allies. “Long decline and divided”, According to the Kremlin.

On paper, taking into account the UN vote in recent weeks, there is no doubt that Russia has been sidelined from the international community: 141 countries condemned the war and called for a ceasefire a week after the invasion of Ukraine. Four people (Belarus, Syria, North Korea and Eritrea) voted for Moscow. But Starting in China, India and many other African and Gulf countries, 35 people did not vote.

After a while, the referendum Russia’s suspension from the United Nations Human Rights Council This initial consensus confirmed that it was weak: 93 states (out of 193) voted in favor, 24 (this time including China) and 58 abstained, including many developing countries.

“There are many countries that are indifferent to war, do not want to be a side force in the conflict between the major powers and are concerned about the consequences on energy and food prices,” said Pascal Boniface, director of the institute. International Relations and Strategy. “Russia is isolated, it is true. But many have decided not to side with Ukraine and its Western allies.”He adds.

How to explain the atrocities committed by Russian soldiers against civilians; Attacks on railway stations and hospitals or the siege of Mariupol provoke great angerAt least in the Western world?

“Many countries have decided to stay out of the conflict, and they fear the consequences. But, above all, the defense of the great policies put forward by the West is not always considered credible.”, Explains Boniface. “The perception in that part of the world is that the West’s geometry of different emotions and the erosion of international law began during the war in Kosovo, the NATO intervention against Serbia in 1999 and especially during the Kosovo war. Iraq in 2003,” he pointed out.

Russia has not stopped using these two chapters as an argument to condemn the US and its intervention Allies since the end of the Cold War And seek to create, once and for all, a new global geo-strategic front that will bring Western hegemony to its knees.

In any case, there are a number of reasons that explain the different conditions. In Africa, Russia has long maintained relations with Libya, the Democratic Republic of the Congo, or Mali, and handled post-colonial discourse in the same ways as the former Soviet Union.

“In Latin America, a form of almost primary American opposition encourages Putin not to criticize and to side with him without any reaction.”Analyzed by Lawrence Lorton, a researcher at the French Institute of International Relations.

See also  Brazil: Neo-Nazis threaten to assassinate Lula da Silva | "We will not be intimidated or remain silent!", The Labor Party replied

Beyond the gestures of reconciliation that took place during the start of the Olympics in early February, China’s early departure in the face of its Russian ally’s militant attitude can be described as “irritating”. , 20 days before the start of hostility. The same can be said of India.

In the western capitals They want to believe that both Beijing and New Delhi are interested in a speedy ceasefire, In a manner that does not impede the respective economic growth. This is true in a certain sense. But India, the US partner, is also Russia’s old ally and one of its main suppliers of weapons against all the powerful Chinese powers in the region.

Indian Diplomacy Large cart Nothing new. Anchored in the policy of non-alignment, New Delhi’s strategic pragmatism allows it to deal with multiple speakers at once. Its allies, Moscow on the one hand and Europe on the other, as well as its partners in the Indo-Pacific arena, help keep its two major adversaries at a distance: China, its expansionist rival, which positiones its troops dangerously. The Himalayan border, and its enemy brother Pakistan, has always been annoyed by the claim to Kashmir, one of the most militarized areas in the world.

“India needs the United States to meet the challenges at sea. To Russia to confront those on the continental plateau. “Nandam Unnikrishnan of the Observer Research Foundation, a think tank based in New Delhi, writes. India has refrained from criticizing Putin’s war in Ukraine for fear that Russia could become even closer with China and Pakistan.

See also  “There are no bills to pay. We have to create now ”: Alvaro reveals details of meeting with Gustavo Petrov

“All these countries are in a trance, which does not make them unconditional supporters of Russia. Boniface notices. Under these conditions, Russian efforts to create this new anti-Western world may take time, but it is not impossible.

Researcher Richard Cowan, director of the United Nations Bureau of the International Crisis Group, an NGO based in New York, says the world sees “non-aligned rebirth as a matter of diplomatic policy.”

“Even if Ukraine and its allies are able to garner significant support, increasing non-aligned forces will decide not to vote in future referendums if the war continues,” he warned. That applies to Moscow.

That “neutral” or “equal distance” demanded by two-thirds of the international community is cooling Western leadersWho seeks to refute Russian arguments.

“Every time Russia provokes a war against the West, we say it is against the basic tenets of the international community. Under no circumstances should we lend to the Russian interpretation of the conflict, “warned French Foreign Minister Jean-Yves Le Drian in early April.” Instead, we must try to unite around UN policy.

But nothing will be easy. In the coming months, the mistakes made by the conflict in Ukraine will undoubtedly complicate the work of all international forums, starting with the G-20 summit, the planet’s 20 major economic powers, scheduled for October in Indonesia. Against the advice of China and the host country, Joe Biden recommended the removal of the Russian president. If he attends, the head of the White House demands that the Ukrainian president be summoned. Volodymyr Zhelensky.

Until then, Moscow will continue to seek more and more support by making a concerted effort to forge a solid strategic alliance with China and India. Like a devilish game of chess, Westerners, for their part, do everything they can to reach a checkmate that destroys this project.