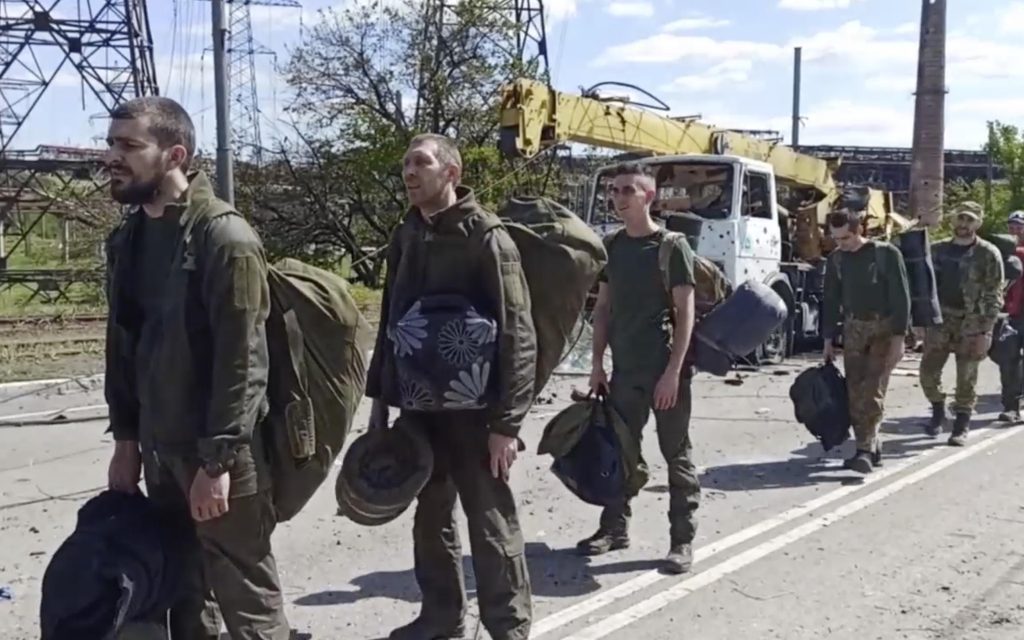 Pokrovsk, Ukraine (AFP) – Concern escalated on Saturday over Ukrainian fighters who became imprisoned at the end of Russia’s brutal three-month siege of Mariupol, in which a Moscow-backed separatist leader vowed they would face the courts.

Russia has claimed complete control of the Azovstal steel plant, which for weeks was the last stronghold in Mariupol and a symbol of Ukrainian steadfastness in the strategic port city, now in ruins with more than 20,000 residents feared dead. Its capture gave Russian President Vladimir Putin a much-needed victory in the war he launched in February.

As the West rallies behind Ukraine, Polish President Andrzej Duda has arrived in Ukraine for an unannounced visit and will address the country’s parliament on Sunday, his office said.

Poland, which has taken in millions of Ukrainian refugees since the start of the war, strongly supports Ukraine’s desire to join the European Union. With Russia closing Ukrainian seaports, Poland has become a major gateway for Western humanitarian aid and arms entering Ukraine and helping Ukraine get its grain and other agricultural products to world markets.

The Russian Defense Ministry released a video of captured Ukrainian soldiers after it announced that its forces had removed their last strongholds from the underground tunnels of the Mariupol factory. Denis Pushlin, the pro-Kremlin leader of the eastern Ukraine region controlled by Moscow-backed separatists, claimed that 2,439 people were in detention. He said on Russian state television that the number included some foreign nationals, although he did not provide details.

Family members of the steel mill fighters, who belonged to a variety of military and law enforcement units, demanded that they be given their rights as prisoners of war and eventual return to Ukraine. Deputy Prime Minister Irina Vereshuk said on Saturday that Ukraine would “fight for the return” of each of them.

Convoys of buses, guarded by Russian armor, left the factory on Friday. At least some Ukrainians were transferred to a former penal colony. Russian officials said others were taken to hospital.

Pushlin said the Ukrainians would certainly face prosecution. Russian officials and state media sought to categorize the fighters as neo-Nazis and criminals.

I think justice must be restored. “There is a demand from ordinary people, society and possibly the right part of the international community,” Pushlin was quoted by the Russian news agency TASS.

between defenders They were members of the Azov Regiment, whose far-right assets were seized by the Kremlin as part of its effort to portray the invasion as a battle against Nazi influence in Ukraine.

The Ukrainian government has not commented on Russia’s claim to take Azovstal. The Ukrainian army told the fighters that their mission had been completed And they can go out. She described their expulsion as an evacuation, not a total surrender.

The capture of Mariupol reinforced Russia’s quest to create a land bridge from Russia that would extend across the Donbass region to Crimea, which Moscow seized from Ukraine in 2014.

The impact on the wider war remained unclear. Several Russian forces have already been redeployed from Mariupol to other places in the conflict.

Russia has destroyed a Ukrainian special operations base near Odessa, Ukraine’s main Black Sea port, as well as a large cache of weapons supplied by the West in the Zhytomyr region of northern Ukraine, Russian Defense Ministry spokesman Igor Konashenkov reported on Saturday. There was no confirmation from the Ukrainian side.

The Ukrainian military reported heavy fighting in most of the Donbass regions in eastern Ukraine.

“The situation in Donbass is very difficult,” President Volodymyr Zelensky said in his video night address to the nation. “As in the previous days, the Russian army is trying to attack Sloviansk and Sievierodonetsk.” He said Ukrainian forces were delaying the offensive “every day”.

Sievierodonetsk is the main Ukrainian-controlled city of the Luhansk region, which together with the Donetsk region forms the Donbas region. Governor Serhi Haiday said the only functioning hospital in the city had only three doctors and a 10-day supply.

The Sloviansk region, located in the Donetsk region, is crucial to Russia’s goal of capturing all of eastern Ukraine and saw fierce fighting last month after Russian forces withdrew from Kyiv. The governor said the Russian bombing on Saturday killed seven civilians and wounded ten others elsewhere in the region.

On Saturday, regional police said that a monastery in the village of Bohorodichne in Donetsk region was evacuated after it was hit by a Russian air strike. In a Facebook post that included a video showing extensive damage to the monastery as well as nuns, monks and children boarding carts on Friday for evacuation, police said.

Zelensky confirmed on Saturday that Donbass is still part of Ukraine and that his forces are fighting to liberate it.

Speaking at a joint press conference with Portuguese Prime Minister Antonio Costa, he lobbied Western countries for multiple launch missile systems, which he said “stand idly by” in other countries but are essential to Ukraine’s success.

On Saturday, US President Joe Biden signed a new infusion of $40 billion in aid For Ukraine, with half for military assistance. Portugal pledged up to 250 million euros, in addition to continued shipments of military equipment.

Mariupol, part of Donbass, was besieged early in the war and became a fearsome model for people elsewhere in the country of the hunger, terror, and death they would face if the Russians surrounded their communities.

The coastal steel mills, which occupied about 11 square kilometers (4 square miles), had been a battlefield for weeks. The dwindling group of superior Ukrainian fighters held out through Russian air strikes, artillery and tank fire with the help of airdrops.

Zelensky revealed in an interview published on Friday that Ukrainian helicopter pilots encountered Russian anti-aircraft fire to transport medicine, food and water, as well as to retrieve bodies and rescue wounded fighters. He said a “very large” number of pilots had died on the missions, describing them as “absolutely heroic”.

On Saturday, the Russian Defense Ministry published a video showing Russian soldiers holding Serhiy Volynsky, commander of the 36th Special Marine Brigade of the Ukrainian Navy, who was one of the main forces defending the steel plant. The Associated Press was unable to independently verify the date, location, and terms of the video.

With Russia in control of the city, Ukrainian authorities will likely face delays in documenting evidence of alleged Russian atrocities in Mariupol, including the bombing of a maternity hospital and a theater where hundreds of civilians had sheltered.. Satellite imagery in April showed what appeared to be mass graves outside Mariupol, where local officials accused Russia of covering up the massacre by burying up to 9,000 civilians.

An estimated 100,000 of the 450,000 people who resided in Mariupol before the war still remain. Many, trapped by the Russian blockade, were left without food, water and electricity.

Ukraine’s mayor of Mariupol warned Saturday that the city faces a health and sanitation “disaster” from mass burials in shallow pits across the devastated city as well as collapsing sewage systems. Vadim Boychenko said summer rains threaten to contaminate water sources as he pressured Russian forces to allow residents to leave the city safely.

“In addition to the humanitarian catastrophe caused by the (Russian) occupiers and collaborators, the city is on the verge of an outbreak of infectious diseases,” he said on the Telegram messaging app.

Follow the AP’s coverage of the war in Ukraine: https://apnews.com/hub/russia-ukraine