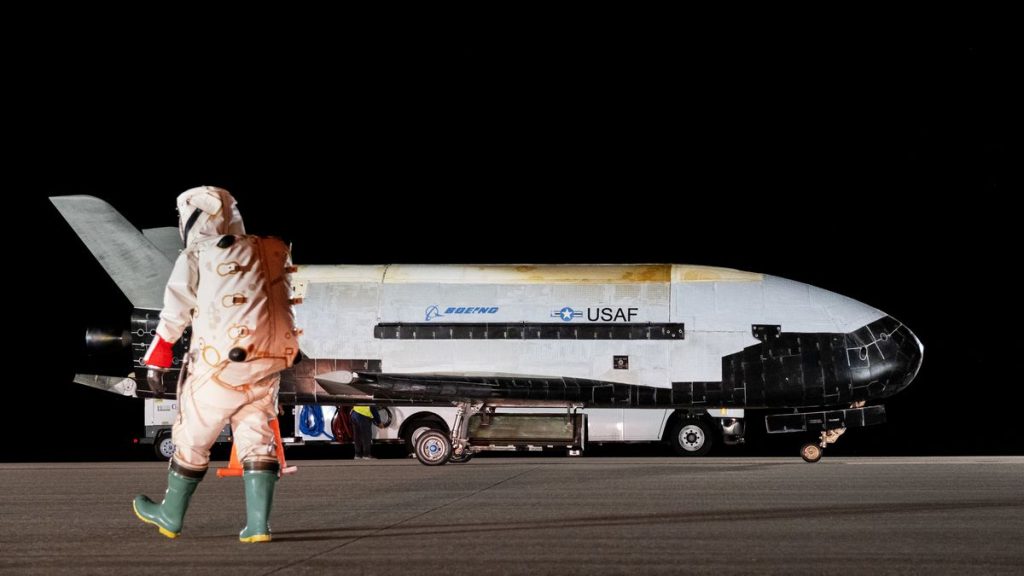 It was just past five in the morning when her house awoke. Her chickens scream. Her kittens scattered. She hid her dogs under the covers. And Nancy Planeta sat up straight in bed wondering: What is that sound?

People across Florida woke up early Saturday morning to the sound of X-37B returning to Earth after 908 days in orbit.

Reports of a sonic boom spread widely, from Titusville to Tampa, as the US Space Force’s autonomous vehicle touched down at NASA’s Kennedy Space Center in Brevard County at 5:22 a.m.

Planeta, 52, who lives in northern Pasco County, searched Facebook and local news sites for answers in the early morning mist. garbage litter collection? gunshots? Exercises at MacDill? She said her father was with the Air Force, so once she recovered from the initial shock, she quickly realized that the explosion was acoustic. Her animals took longer to collect themselves.

“They’re used to the coolness of rural life,” she said Sunday morning.

In a statement, Boeing, which made the X-37B, said the aircraft has now flown more than 1.3 billion miles and has spent 3,774 days in space while conducting experiments for the government and its partners.

One experiment, in partnership with the US Naval Research Laboratory, involved converting solar energy into microwave energy. Another goal is to test the durability of some materials subjected to space conditions to ultimately improve the accuracy of models of the space environment.

“This mission highlights the Space Force’s focus on cooperating in space exploration and expanding low-cost access to space for our partners, both within and outside the Department of the Air Force,” U.S. Space Force General and Chief of Space Operations Chance Saltzman said in a statement.

See also  "Time Dilation" - Our perception of time has slowed down

The X-37B was developed by NASA as a test base for future spacecraft. Today, it is jointly operated by the Space Force and the Air Force’s Office of Rapid Capabilities. The US Space Force is believed to have two X-37B vehicles, 29 feet from front to tail, located somewhere between a pickup truck and a school bus in length.

X-37B was launched into orbit from Cape Canaveral Space Force Station on May 17, 2020, when Donald Trump was president — about two months after the World Health Organization declared COVID-19 a pandemic.

Its sixth mission was four months longer than any previous X-37B flight.

“This return further underscores the capabilities of Space Florida’s launch and landing facility that are ideal for both the Department of Defense and commercial missions alike,” Frank DiBello, president and CEO of Space Florida, the state’s space funding and development authority, said in a statement. .

At Bithlo, located in Orange County about 30 miles west of the Kennedy Space Center, Carlos and Johanna Alfonso captured the boom on a doorbell camera.

They ventured out after they woke up from sleep, and said that a strange mist with the smell of sulfur hung in the air.

Spend your days with Hayes

Columnist Stephanie Hayes will share thoughts, feelings, and funny actions with you every Monday.

You are all registered!

Want more of our free weekly newsletter in your inbox? Let’s get started.

Explore all your options

On the Gulf Coast, Peter Anderson was also awakened by a strange sound piercing the still dark sky.

“Was I imagining it?” The 37-year-old Sarasota resident remembers thinking.

Unable to fall asleep again, he said he took out his phone, opened Twitter, and went online chatting about the X-37B. He loosely follows space developments, so he heard about the plane, but had no idea how close to its nearly 30-month orbit.

“It would be great if we knew about these things,” he said.