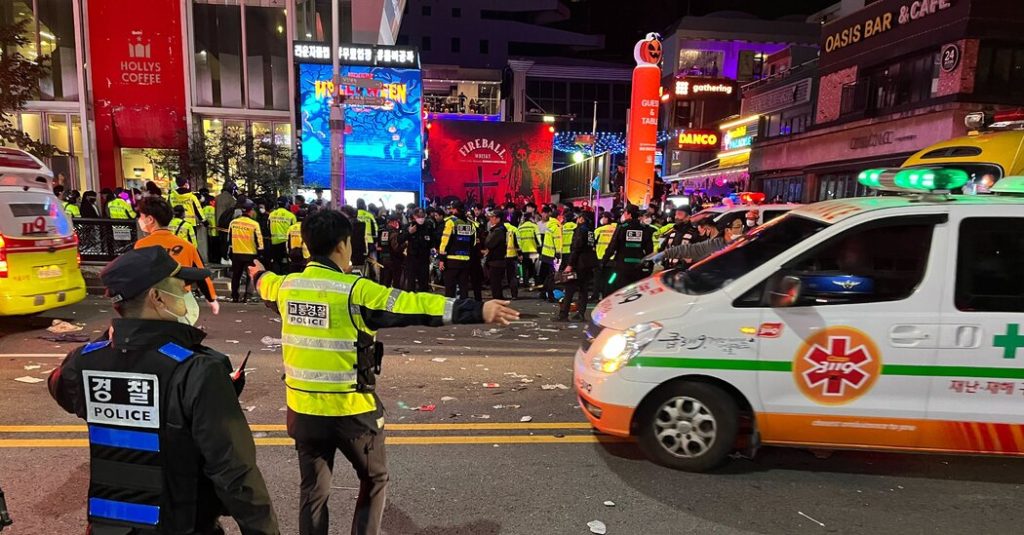 The fire of neon signs and the mingling of famous brands, so familiar from urban nightlife spots across Asia, made the horror that occurred in Seoul on Saturday night even more raucous.

Ravo, Fireball Whiskey and Oasis Bar advertise billboards at one intersection in the city’s Itaewon neighborhood. “Happy Halloween,” read another large banner on yellow, red, pink, and blue letters. It all spoke to a magnet for young people looking to have a good time.

But videos taken in the immediate aftermath of the accident, in which more than 140 people were killed and more than 100 injured, tell a different story. One showed emergency workers in neon jackets pumping hard on people’s chests scattered on the ground in a desperate attempt to revive them.

“There were so many people that we couldn’t move,” said Song So-yeon, 46, who was visiting from Incheon and arrived at Itaewon subway station an hour after the event. “It looked like I was going to die if I fell.”

Another witness wrote on Twitter: “People kept pushing and crushing more people. “People who were crushed under the crowd were crying and I thought I was going to be crushed to death too, breathing through a hole and crying for help.”

Hours later, ambulances were still carrying the bodies, covered in yellow sheets, and late-night partygoers were working their way home. Until then, authorities said they had no clear idea of ​​what exactly happened and how an annual festival developed so quickly into one of the country’s biggest disasters in years.

One of the most prevalent reactions on social media in the immediate aftermath of the incident was to express concern to people who were nearby, or may have been, and are not now answering their phones.

“I really hope my friend in Seoul is sleeping and safe,” one of the messages read on Twitter.

People involved in such situations in the aftermath said that the biggest shock was the sudden switch from normalcy to panic that could engulf a crowd and the feeling that the natural world had suddenly turned upside down.

A passerby said he saw dead bodies in the street limp. He said, “I wish I hadn’t.” “But I did. It was heartbreaking.