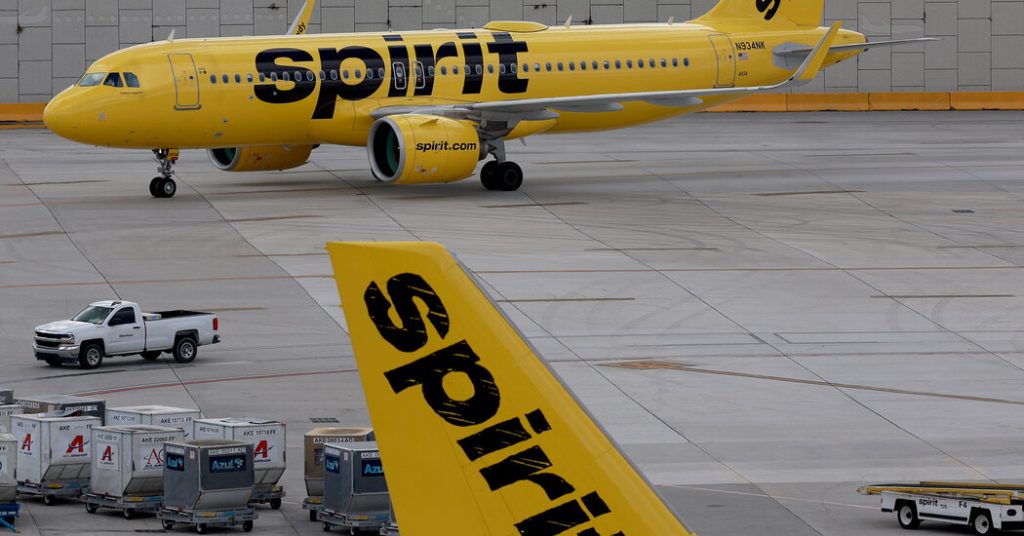 Spirit Airlines on Monday rejected a takeover offer from JetBlue Airways, saying it was unlikely regulators would agree to the proposal.

In a letter to JetBlue, Spirit executives said they had determined that JetBlue’s takeover offer, updated Friday, was unlikely to secure regulatory approval as long as the company’s recently announced partnership with American Airlines was in effect. The Department of Justice and several states sued to block the alliance, arguing that it is anti-competitive, and JetBlue said it would not abandon the partnership.

In a statement Monday, Spirit’s chairman, Mac Gardner, said the company was sticking with its plan to merge with Frontier Airlines, a deal predating the JetBlue bid that Spirit argued reflected the long-term best interests of shareholders.

“After a thorough review and extensive dialogue with JetBlue, the Board of Directors determined that the JetBlue proposal contained an unacceptable level of closure risk that Spirit shareholders might assume,” said Mr. Gardner. “We believe our pending merger with Frontier will begin an exciting new chapter for Spirit and provide many benefits to Spirit shareholders, team members, and guests.”

Spirit and Frontier, both low-cost airlines, announced a plan to merge in February. Then, JetBlue stepped up with the biggest An offer to Spirit, surprising many industry analysts and experts. Both deals will face scrutiny from Biden’s administrative regulators, who have expressed more skepticism about the merger than their predecessors.

Some analysts contend that Spirit and Frontier are more suitable for a merger because they operate under similar “ultra-low-cost” business models but have more frequent flights in different parts of the United States. The JetBlue-Spirit combination may be more difficult because the airlines’ business models are very different. But the deal can Allow JetBlue to compete more effectively Against the country’s four dominant airlines.

JetBlue’s updated offer added a few more perks to address Spirit’s concerns about regulatory approval, including an offer to divest some assets from both airlines. JetBlue also said it would commit to relinquishing Spirit’s assets in New York and Boston, the markets at the heart of JetBlue’s partnership with American, known as the Northeast Alliance, in an effort to win Justice Department approval. JetBlue also said it would pay Spirit a fee of $200 million if antitrust regulators block the deal.

Spirit’s leadership responded in a letter to JetBlue’s CEO on Monday, saying they did not believe the updated offering had a reasonable chance of success. Spirit said regulators were likely “extremely concerned” that JetBlue’s offering could lead to higher costs, and thus higher prices for consumers. Spirit said converting its planes, which are densely packed with seats, to a more spacious JetBlue configuration would drive prices up, for example.

JetBlue said in response that both its offer and the Frontier deal shared a “similar organizational profile,” but that Frontier did not offer to liquidate assets or pay a breakup fee. JetBlue also said that the value of Frontier’s cash-and-share deal has eroded due to a drop in that company’s share price.

JetBlue also accused Spirit of failing to give it sufficient access to data about the low-cost carrier’s business while asking for “unprecedented commitments” from JetBlue.

For JetBlue, the US partnership and Spirit offer are opportunities to accelerate its planned expansion. JetBlue, which has long maintained a large presence at New York’s Kennedy International Airport, has been restricted due to gate availability at busy airports in the area. In their partnership, JetBlue and American agreed to sell each other’s flights, creating links between their frequent flyer programs and pool take-offs and landings. It also allows JetBlue, which primarily flies within the US, to sell more international tickets on US planes.

A trial in the Justice Department v. Coalition case is scheduled for late September.

Representatives from American and Frontier declined to comment on Monday’s developments, but Stephen Johnson, a senior US executive, said in a call with analysts and investor journalists last month that the JetBlue-Spirit deal would have no impact on the Northeast Alliance.

“It’s not going to change a little bit the value we create for consumers in New York and Boston,” he said.