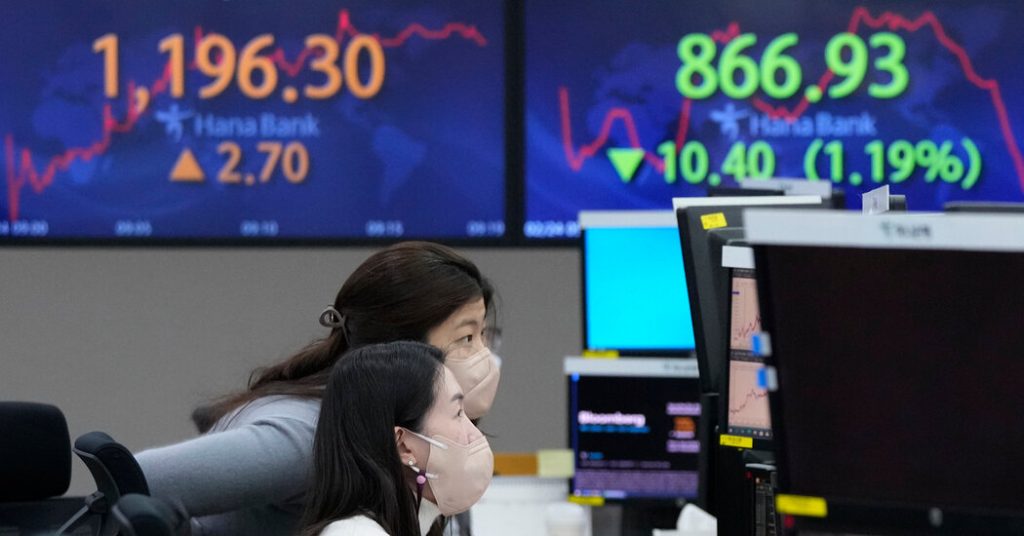 The price of oil jumped above $105 a barrel for the first time since 2014, natural gas futures in Europe rose 40 percent, and global stock indices fell on Thursday. Russia invaded Ukrainewhich led to continued market turmoil in the US and Europe that was driven by fears of a large-scale attack.

Wall Street was poised for a slide at the start of trading, with futures pointing to a 2.5 percent drop in the S&P 500.

The devastation in the financial and commodity markets from Russia’s overnight attack was immediate and widespread, beginning with Asia, with Hong Kong’s Hang Seng losing 3.2%.

In the early afternoon in Europe, Germany’s DAX was down more than 5 percent, and the broader Stoxx Europe 600 was down 4 percent.

The price of global benchmark Brent crude rose more than 8 percent to 105.32 dollars a barrel. West Texas Intermediate also jumped 8 percent, moving above $100 a barrel for the first time in more than seven years.

Gas futures for the month of the nearest maturity in the Netherlands, a European natural gas standard, rose 40 percent to around 125 euros per hour. Russia supplies more than a third of EU gas, some of which passes through pipelines in Ukraine. A year ago, gas was sold at around 15 euros per megawatt-hour.

With more aggressive financial divisions against Russia in the making, global bank stocks are dropping faster than the markets in general. Shares of European banks with the largest Russian operations fell: Austria’s Raiffeisen fell 19%, Italy’s UniCredit and France’s Société Générale lost about 11% of their value.

In Moscow, stocks collapsed and the ruble fell to a record low against the dollar. The MOEX Russia stock index has lost nearly a third of its value. The Russian stock exchange resumed trading at 10 am local time after suspending the session earlier in the day.

Global markets have witnessed widespread nervousness in recent days. The Stoxx Europe 600 reversed early gains to fall 0.3 percent on Wednesday. The S&P 500 posted a fourth straight day of losses, losing 1.8 percent and sliding deeper into correction territory – down more than 10 percent from a recent high. It is now 11.9 percent from its peak on January 3rd.

News from Ukraine is becoming increasingly terrible Thursday. Russian President Vladimir Putin has ordered the start of a “special military operation”, and the Ukrainian government has confirmed that several cities have been attacked. Cyber ​​attacks have also destroyed government institutions in Ukraine.

The impact of the Ukraine crisis on the global economy

growing concern. A Russian attack on Ukraine could cause AMAZING HIGHS IN ENERGY And food prices scare investors. The economic damage from supply disruptions and economic sanctions may be severe in some countries and industries and unnoticeable in others.

energy cost. oil prices It is already the highest since 2014It escalated with the escalation of the conflict. Russia is the third largest oil producer, providing nearly one in 10 barrels consumed by the global economy.

Food prices. Russia is The largest supplier of wheat in the world Together with Ukraine, it accounts for nearly a quarter of total world exports. In countries such as Egypt and Turkey, this grain influx makes up more than 70 percent of wheat imports.

Deficiency of essential minerals. The palladium priceWhich is used in car exhaust systems and cell phones, has risen amid fears that Russia, the world’s largest exporter of the metal, could be cut off from global markets. The price of nickel, another major Russian export, has also risen.

financial turmoil. global banks Prepare for the effects of sanctions Designed to restrict Russia’s access to foreign capital and limit its ability to process payments in dollars, euros, and other currencies essential for trade. Banks are also on the alert for retaliatory cyber attacks by Russia.

A large-scale invasion could have wide-ranging effects on commodities, including oil, natural gas, wheat, and minerals. Europe is highly dependent on Russia for energy, and parts of the Middle East and Africa receive most of their wheat from Russia and Ukraine. Even if supply chains remain intact and Russian exports are not affected by the sanctions, there are concerns that Mr. Putin may punitively cut supplies.

Few of Russia’s exports go directly to the United States, but turmoil anywhere could raise prices, prolonging inflation that has already run longer than officials expected. The Fed has signaled that it is preparing to raise interest rates, with the goal of slowing inflation by slowing spending, and giving supply time to catch up. But higher rates will also dampen growth, and doing so while markets are already declining risks prolonging deflation.

US stocks have been shrugging off the correction for weeks, as investors worried about how quickly the Federal Reserve would raise interest rates. Technology stocks in particular have slipped away from their highs, and the tech-heavy Nasdaq Composite is down 18.8 percent from its November record. It’s close to the drop that would indicate an even worse change in sentiment on Wall Street: a bear market, or a 20 per cent drop.

Anton TroyanovskyAnd the Austin Ramsey And the Jason Karian Contribute to the preparation of reports.