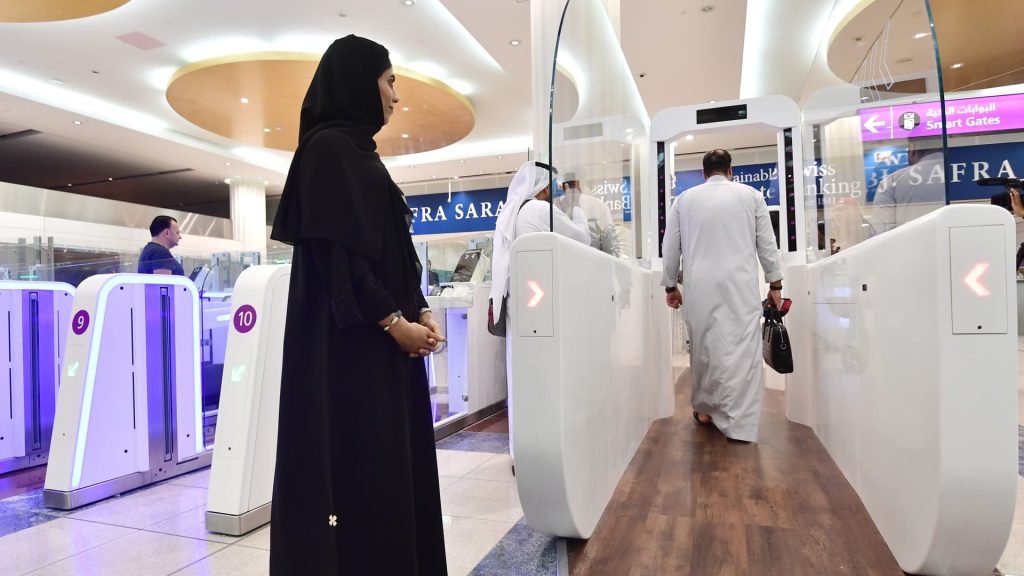 A passenger passes immigration control through a “smart tunnel” at Dubai International Airport.

Dubai, United Arab Emirates – The United Arab Emirates has been ranked as the number one passport in the world in terms of mobility and freedom from travel restrictions, according to the latest edition of the Passport Index, a global ranking by the Montreal-based citizenship advisory firm. Arton Capital Company.

The United Arab Emirates, a small, oil-rich Gulf sheikhdom with a population of about 10 million – about 90% of whom are foreign expatriates – beat out the likes of Germany, Sweden, Finland and Luxembourg in the last ranking, although those countries are all in the top five.

Compare that to the United States, whose passport allows visa-free travel to 109 countries and visa-on-arrival to 56 countries, while 26 countries require Americans to apply for visas to enter. The “world reach” of the US passport is accounted for by 83% of the countries in the world, compared to 91% for the United Arab Emirates.

The UAE, a desert hub for business and travel and home to the headquarters of multinational companies in any country in the Middle East, received a “Mobility Score” topping the list 180. The methodology behind this score takes into account visas and visas. privileges access to other countries, and “the higher the degree of mobility, the better global mobility the passport holder will enjoy,” according to the report.

“The Mobility Score is how the strength of a passport is measured in the Passport Index,” she added. “Passports accumulate points for each country that holders can visit without a visa, with a visa on arrival, an e-visa (if used within three days), or an electronic travel authorization.”

The UAE has benefited from several reforms in recent years that have brought more people into the country to live, including the normalization of relations with Israel and the introduction of the remote worker visa. Its leaders reopened or improved diplomatic ties and made significant investments and trade agreements with several different countries.

It has also refrained from severing travel ties with Russia and Belarus over the war in Ukraine, unlike many Western governments, making it a highly desirable destination for people from those countries, especially those trying to evade sanctions. The resulting influx of people has created a real estate boom, especially for the UAE’s attractive commercial and tourist capital Dubai.

Dubai itself was recently ranked by networking platform InterNations as one of the top five cities in the world for expats to live in. Allowing more nationalities in easily usually means that those countries are reciprocated.

“The UAE has emerged as a unique crossroads,” Tawfiq Rahim, a research fellow at the Mohammed bin Rashid School of Government in Dubai, told CNBC. “It’s between East and West, developed economies and developing economies, and open to all. It’s hard for any country to compete with this diversity of access, and so it’s not surprising that it tops any passport index.”

The number of UAE passport holders is around 1.5 million, according to local media reports. The UAE is regularly ranked as one of the safest countries in the world, with a very low crime rate.

“Europe remains a particularly strong group, but the rise in passports from the Gulf states is undeniable,” said a statement from Arton Capital. She added that the results also showed “a state of stagnation in some passports, such as British passports, as a result of domestic political choices.”

The report said that despite the outbreak of war in Europe and the consequences of the Covid-19 pandemic that prevent travel, countries in general have become more welcoming and global traffic has increased. Changing work structures including the advent of remote work have helped move this forward.

“Many think of the lifelong commute switch to the office as a ‘digital nomad’,” Arton Capital writes. “The investment these workers bring to host countries is very attractive to many countries. Consequently, the world has witnessed a boom in the implementation of ‘digital nomad’ visas in countries around the world, from Thailand to Estonia.”

“Although the world is still feeling the aftermath of the pandemic, it is surprising that travel has never been easier, with passport power growing exponentially across the board, a trend we expect to continue into 2023,” the company wrote. Adding that, according to her methodology, almost every passport in the world has become more robust in terms of portability.