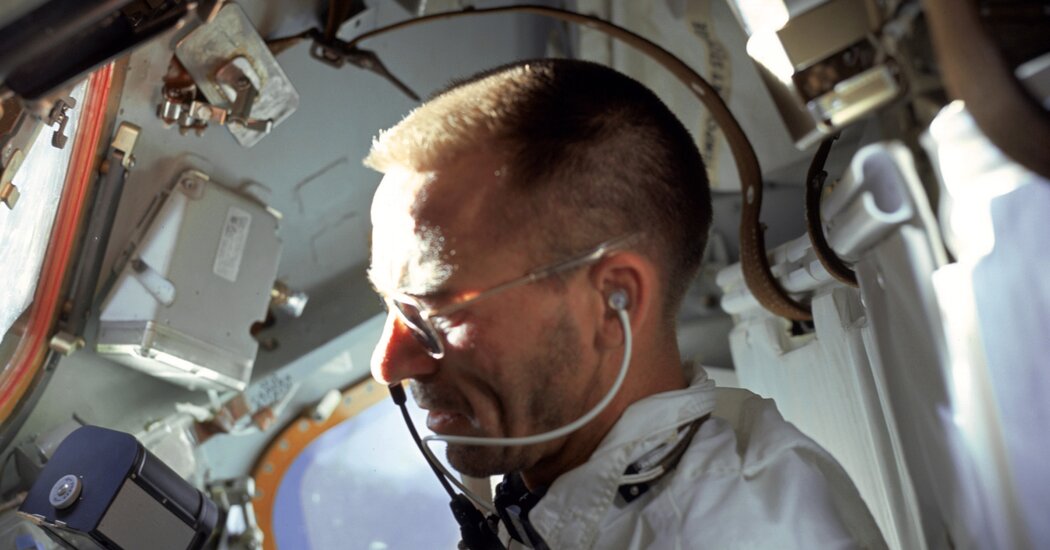 NASA upgraded the Apollo 7 astronauts’ medals to a Distinguished Service Certificate at a ceremony in October 2008, noting mission success, despite arguments with flight controllers. But Mr. Cunningham was the only surviving crew member by then. Major Eisell, who died in 1987, was represented by his widow, Susan Eisell Black. Captain Schirra, who died in 2007, was killed by astronaut Bill Anders.

Mr. Kraft took a conciliatory stance. “We got you on hard times once, but you certainly got through it and have done very well since,” Mr. Cunningham said in a recorded message. “You did a good job on your own, you did a good job with NASA, and I’m honestly very proud to call you a friend.”

Ronnie Walter Cunningham was born on March 16, 1932, in Creston, Iowa, the eldest of five children. His father, Walter, owned a small construction company. When he was young, his family moved to Venice, California.

He entered the Navy in 1951 and flew Marines in the Korean War. After leaving active duty in 1956, he received bachelor’s and master’s degrees in physics from the University of California, Los Angeles. In October 1963, while working at the RAND Corporation and pursuing studies at the doctoral level, he was assigned to the third group of NASA astronauts.

Shortly after Apollo 7, Mr. Cunningham was appointed director of what became known as the Skylab program, which developed America’s first space station. He was succeeded by astronaut Pete Conrad in 1970. Mr. Cunningham resigned from NASA the following year after failing to obtain a mission to fly the next Skylab missions.

Mr. Cunningham later became a senior executive in financial and real estate firms. In 2012, he joined a group of former astronauts and NASA employees who sent a letter to the agency criticizing what they felt were unproven assertions that man-made carbon dioxide was a major factor in global warming.