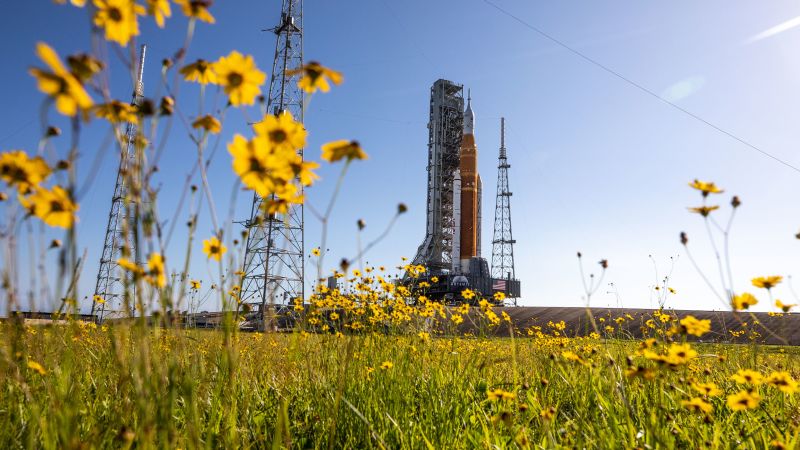 The Artemis I giant moon rocket is ready for refueling.

The fourth attempt for the final pre-launch test began on Saturday, and refueling of the rocket is expected to begin on Monday morning.

The critical test, known as the rehearsal, simulates each launch stage without the rocket leaving the launch pad at the Kennedy Space Center in Florida.

The results of training in wet clothes will determine when Artemis I will embark on a mission beyond the Moon and back to Earth. This mission will launch NASA’s Artemis program, which is expected to return humans to the moon and land the first woman and first people of color on the moon by 2025.

Three previous attempts at training in wet clothes in April were unsuccessful, and ended before the rocket was fully loaded with fuel due to various leaks. NASA says these errors have since been corrected.

The NASA team rolls a 322-foot (98 m) stack of Artemis I rockets, including the Space Launch System and Orion spacecraft, to the launch pad at Kennedy Space Center in Florida on June 6.

The rehearsal began at 5 p.m. ET on Saturday with a “Call to Stations” — when all teams associated with the mission arrive at their consoles and report that they’re ready to begin testing and a two-day countdown begins.

Preparations over the weekend will see the Artemis team begin loading propellant into the rocket’s core and upper stages.

There is currently a live view of the missile in operation NASA websitewith intermittent comment.

The tank was suspended due to an identified problem with the reserve supply of gaseous nitrogen. The launch team replaced the valve that was causing the problem. In order to ensure that the backup supply works as expected, it has been replaced as the primary supply for today’s test.

The comment was lifted at 9:28 a.m. ET. Liquid oxygen and liquid hydrogen, cooled to minus 297 degrees Fahrenheit (minus 182 degrees Celsius), will fill the tanks. Venting may be visible while the tanks are full.

A two-hour testing window will begin later, with Team Artemis targeting the first countdown at 4:30 p.m. ET. due to tank delay.

First, team members It will count down to 33 seconds before launch, then stop the cycle. The clock will be reset; Then the countdown will resume again and last until about 10 seconds before the launch occurs.

According to an update on the NASA website, “During testing, the team may continue during the countdown as necessary to verify conditions before resuming the countdown, or extend beyond the test window, if necessary and resources permit.”

“Hopefully we can finish it this time and finish the cryogenic loadings along with the final count,” she said. “Our team is ready to go, and we look forward to returning to this test.”

The mission team is looking for potential launch windows to send Artemis I on its journey to the moon in late summer: from August 23 to August 29, and from September 2 to September 6. and beyond.

Once the Artemis rocket group completes its rehearsal, it will return to the Space Center Vehicle Assembly Building to wait for launch day.

There is a long history behind the grueling testing of new systems before launch, and the Artemis team faces experiences similar to those of the Apollo and shuttle era teams, including multiple test attempts and delays.

“No one on the team abdicates the responsibility that we and our contractors have to manage and deliver, and deliver, the means that meet these flight-test goals for (Artemis I), and meet those of Artemis I,” said Jim Frey, associate director of NASA’s Exploration Systems Development Mission Directorate. during a press conference held last week.

See also  Why isn't the Earth perfectly round?