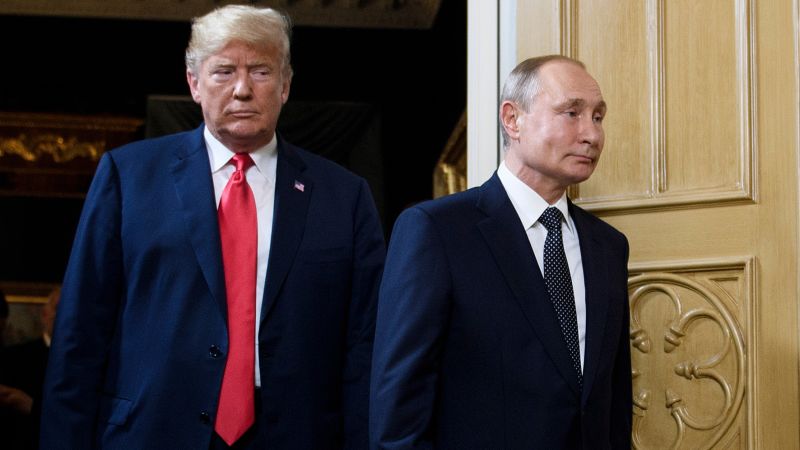 Over and over again this week — when Russia massed its forces along Ukraine’s border and then invaded it on Wednesday night — the former US president found time to pay tribute to Russian President Vladimir Putin.

Tuesday, in an interview With conservative radio hosts Clay Travis and Buck Sexton, Trump has repeatedly praised Putin for his Ukraine strategy.

I went yesterday and there was a TV screen, and I said, This is genius. Putin declares a large part of Ukraine – from Ukraine. Putin declares it an independent country,” Trump said. “Oh, that’s great.”

Later in the same interview, Trump said this: “Putin says now, it’s a big part of an independent Ukraine.” I said: How smart is this? And he will go in and be one of the peacekeepers.”

Then on Wednesday night, Trump made a very similar remark while speaking during a fundraiser in Mar-a-Lago.

Politically, this sounds crazy. Praising the Russian invasion – without any provocation whatsoever – is not the kind that American politicians do. Since the Cold War, America has viewed Russia with great skepticism, realizing that the country has expansionist tendencies that could imbalance the fragile peace that has existed since World War II.

So why is Trump praising Putin? For Trump, it’s all – and I mean everything – a transaction. There is no right or wrong. There’s just, can you do this thing or not, and what do you get for how much it costs you. From Trump’s view of the world, strength corrects. If you are maybe Take something, you must. All that matters is that you are seen as strong – in your country and in the world -.

We’ve seen that sentiment manifest many times during Trump’s presidency.

Earlier this year when he was supported Hungarian Prime Minister Viktor Orban for re-election, Trump praised him for doing a “strong and wonderful job protecting Hungary” and described him as a “strong leader”.

From Chinese President Xi Jinping, Trump said: “I like Chairman Xi very much. I consider him a friend – but I love him very much. I got to know him very well. He is a gentleman, isn’t he? Anyone – he is a strong man, a strong man.”

About Turkish President Recep Tayyip Erdogan Trump show this: “President Erdogan: It’s difficult, but I get along with it.”

Trump has also praised Putin in the past for the iron fist he rules. “A man has very strong control over a country,” Trump said about the Russian president In 2016. “Now, it’s a completely different system and I don’t like that system, but certainly in this system, he was a leader. Much more than our boss was a leader.”

Trump’s affinity for autocrats is well established. He loves the idea that they do what they want whenever they want – and curse the naysayers who question them.

Given all of that, it should come as no surprise that Trump is praising Putin, even as the Russian president is stirring up conflict in Europe. This is what Trump seems to believe in. Which is very scary.