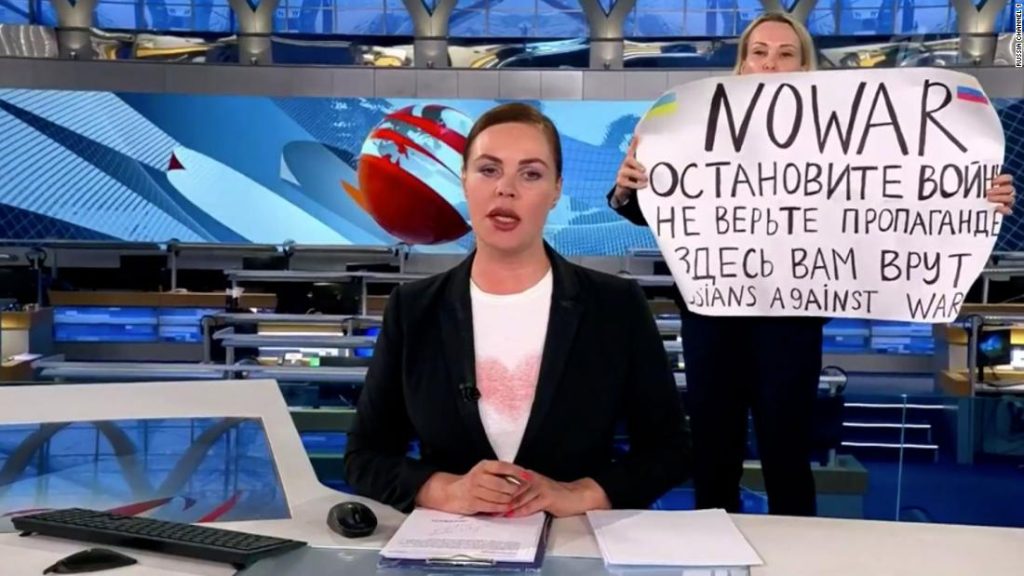 The sign reads, “Stop the war. Don’t believe the propaganda that tells you a lie here.” The last line of the sign in English reads “Russians against war.”

The woman who carried out the defiant act has been identified as Maria Ovsyanikova, an employee of Russia’s Channel One, according to OVD-Info, an independent group that monitors human rights protests. The contents of the port are strictly controlled by the Russian government.

CNN cannot independently verify that the woman holding the banner is Ovsyannikova, but photos on social media pages bearing her name match the woman on screen.

The Russian state news agency TASS confirmed what was reported by OVD-Info, citing a source, and added that she may face trial.

Ovsyannikova’s friends told OVD-Info that she was in the Ostankino police department in Moscow, but her lawyer, Dmitry Zakvatov, later told CNN that he could not locate her.

“We haven’t found it at the moment, but we’re continuing to search,” Zakvatov said.

The protest action came nearly three weeks after Russia invaded neighboring Ukraine, causing a humanitarian catastrophe in the country Effects The biggest security crisis in Europe since the Cold War.
Satellite imagery shows widespread devastation from Russian bombing across Ukraine, including the major cities of Kyiv and Mariupol. More than 2500 civilians Die In Mariupol alone, according to estimates by Ukrainian officials. More than 2.8 million residents have fled the country since the invasion began, according to United Nations refugee estimates.

OVD-Info also obtained a video allegedly filmed by Ovsyannikova before she cut off the news broadcast.

“What is happening now in Ukraine is a crime, Russia is the aggressor country, and the responsibility for this aggression lies on the conscience of only one person. This man is Vladimir Putin,” Ovsyanikova said in the video, noting that her father is Ukrainian, and her mother is Russian.

“Unfortunately, for the past few years, I have been working on Channel One and doing propaganda for the Kremlin, and now I am very ashamed of it,” she says in the video. “It is a shame that I allowed lies to be spoken from television screens, ashamed that I allowed the Russian people to be harmed.”

“I am ashamed that we were silent in 2014, when all of this was just beginning,” she says, referring to the 2014 Russian invasion of Ukraine that led to the annexation of Crimea. “We did not go to rallies when the Kremlin poisoned Navalny, we watched in silence this anti-human regime and now the world has turned its back on us forever, and ten more generations of our grandchildren will not be able to escape the shame of this fraternal war.”

“We’re Russian, we’re thinking and smart, and we can’t help but stop all this craziness,” she says. “Go to the rallies and don’t be afraid! They can’t plant us all!”

Soon, videos of the boycott were posted on social media after they were broadcast. CNN obtained the video from the live broadcast of the profile of Russia’s First Channel VK.

Within minutes, that live broadcast had been removed.

See also  Officials: The ship that ran aground in the Suez Canal has been re-floated