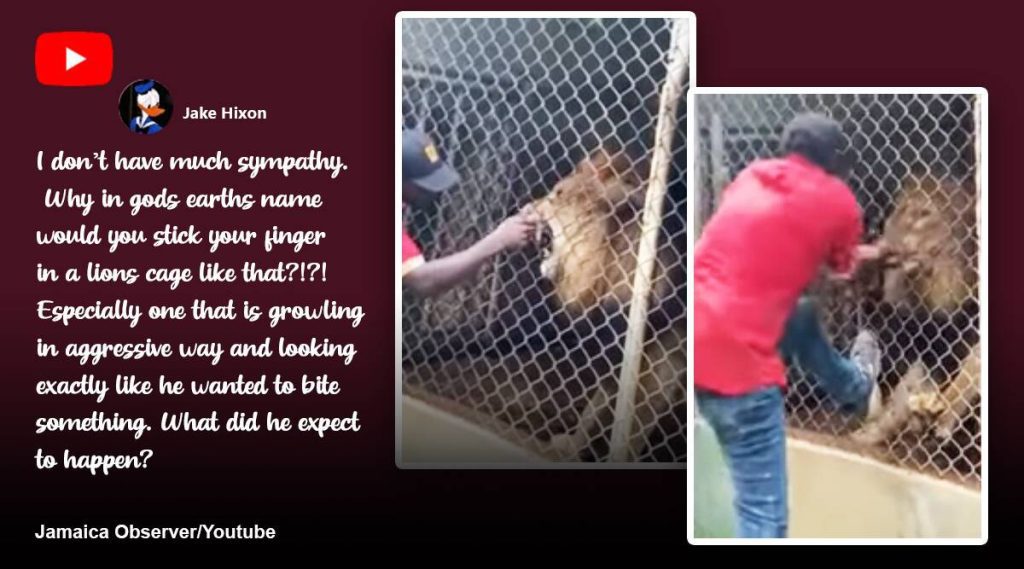 A fun day at the zoo for a group of visitors in Jamaica turned into a horrific ordeal as they ended up watching a lion erupt at someone who appeared to be a zoo keeper. A video of the incident, which has since gone viral, sparked criticism on social media with many questioning the treatment the animals received at the facility.

The video clip shows an African lion roaring in his enclosure while the man continues to harass the wild cat by putting his hands through the iron net to pet or tickle him. The animal, apparently annoyed, is heard snarling in protest and even trying to grab the man’s finger as visitors record the event on their mobile phones.

Soon things get derailed as the monster manages to bite the man’s finger. As the man screams and looks up he uses all his might to get animal to leave his handThe lion refuses. After struggling for a little, the lion finally leaves and the man falls to the ground.

to me jamaicaobserver.com, The incident occurred at the Jamaica Zoo on Friday and a lion cut off a man’s finger at an attraction based in St. Elizabeth. The accident took place in the late afternoon and was witnessed by more than 15 guests.

A visitor who witnessed the incident said that the incident occurred near the end of the tour at the zoo when the man, in an apparent attempt to impress the visitors, attempted to pet the lion. However, it only provoked the wrath of wild animals.

“When it happened, I thought it was a joke. I didn’t think it was serious. I didn’t realize the seriousness of it, because their job is to make a show,” she said, adding that everyone started to panic after he fell to the ground.

With the short clip going viral, many criticized the man for being irresponsible and reckless. Others described his actions as “idiotic” and said “he got what he deserved”.

With criticism mounting, the zoo issued a statement with its management assuring everyone that the zoo was a safe place for everyone. They explained that the man in the video was a “contractor” and explained that the clip did not represent safety procedures and policies that must be adhered to in the facility at all times.

Calling the incident “tragic”, the zoo said it was “doing everything to help the gentleman move forward.”