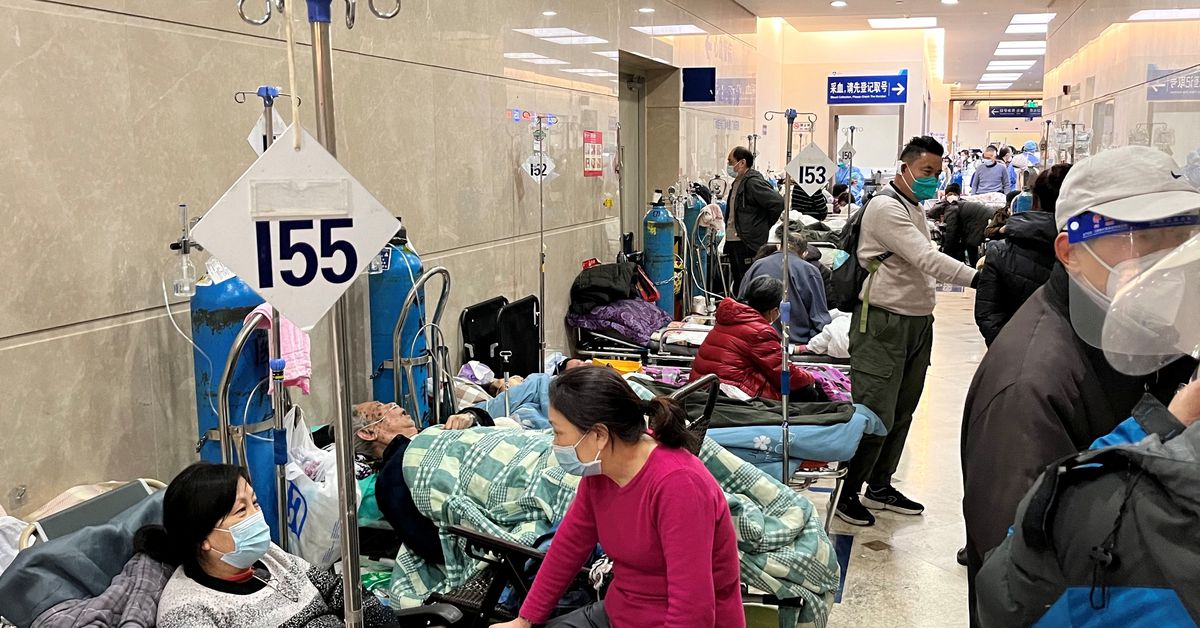 BEIJING/SHANGHAI (Reuters) – China’s state media played down the severity of its spread of COVID-19 cases ahead of a briefing that its scientists are expected to give on Tuesday to the World Health Organization, which is hoping for detailed data on the novel coronavirus. virus evolution.

China’s abrupt shift in COVID controls on December 7, combined with the accuracy of its case and death data, has come under increasing scrutiny at home and abroad and prompted some countries to impose travel restrictions.

The policy shift followed protests against Xi Jinping’s “zero COVID” approach, marking the strongest display of public defiance in his decade-long presidency and coinciding with China’s slowest growth in nearly half a century.

With the virus spreading unchecked, funeral parlors have reported a surge in demand for their services and international health experts expect at least 1 million deaths in the world’s most populous country this year.

China reported three new deaths from the coronavirus on Monday, bringing the official death toll since the pandemic began to 5,253.

On Tuesday, the People’s Daily, the official newspaper of the Communist Party, quoted Chinese experts as saying that the illness caused by the virus was relatively mild for most people.

In the past three weeks, a total of 46 patients were admitted to intensive care units, or about 1% of symptomatic infections, said Kang Yan, chief of Sichuan University’s West China Tianfu Hospital.

A Reuters witness said the emergency area of ​​Zhongshan Hospital in Shanghai was packed with patients on Tuesday, most of them elderly. Some were in beds in the corridor, covered with blankets and receiving intravenous medication, while dozens stood in lines around them, waiting to be seen by a doctor. It is not clear how many people have been infected with the Corona virus.

The World Health Organization called on Chinese scientists to provide detailed viral sequence data at a meeting on Tuesday of a technical advisory group. It also asked China to share data on hospital admissions, deaths and vaccinations.

“I don’t think China will be very honest in revealing information,” said Alfred Wu, an assistant professor at the Lee Kuan Yew School of Public Policy at the National University of Singapore.

“They’d rather keep it to themselves or say nothing happened, nothing new. My sense is we can assume there’s nothing new… But the problem is, the issue of transparency in China is always there.”

The United States, France and other countries will require COVID tests on travelers from China, while Belgium said it will test sewage from planes for new types of COVID.

European Union health officials will meet on Wednesday on a coordinated response.

China has rejected criticism of its COVID data and said any new mutations may be more contagious but less harmful.

China’s foreign ministry said on Tuesday that entry restrictions imposed by some countries on travelers from China “lack scientific basis” and are “simply unreasonable”.

China will stop requiring inbound travelers to enter quarantine from January 8, but will still require a negative PCR test result within 48 hours before departure.

Data on Tuesday showed that Chinese factory activity contracted at a sharper pace in December.

December shipments from Foxconn (2317.TW) The Zhengzhou iPhone factory, which has been disrupted by worker departures and unrest amid the COVID outbreak, accounted for 90% of the company’s initial plans.

The head of the International Monetary Fund, Kristalina Georgieva, said a “wildfire” of infections in China in the coming months is likely to hurt its economy this year and push down global growth.

“China is entering the most dangerous weeks of the epidemic,” Capital Economics analysts warn.

They added that mobility data indicates that economic activity has slowed nationwide and is likely to remain so until infections subside.

The Ministry of Culture and Tourism said 52.71 million domestic trips during the New Year holidays generated 26.52 billion yuan ($3.84 billion), up 4% year-on-year, but only about 35% of 2019 revenue, before the pandemic hit.

Expectations are rising for China’s biggest holiday, the Lunar New Year, later this month, when some experts predict infections will peak in many places.

Media reported that some hotels in the tourist resort of Sanya are fully booked for this period.