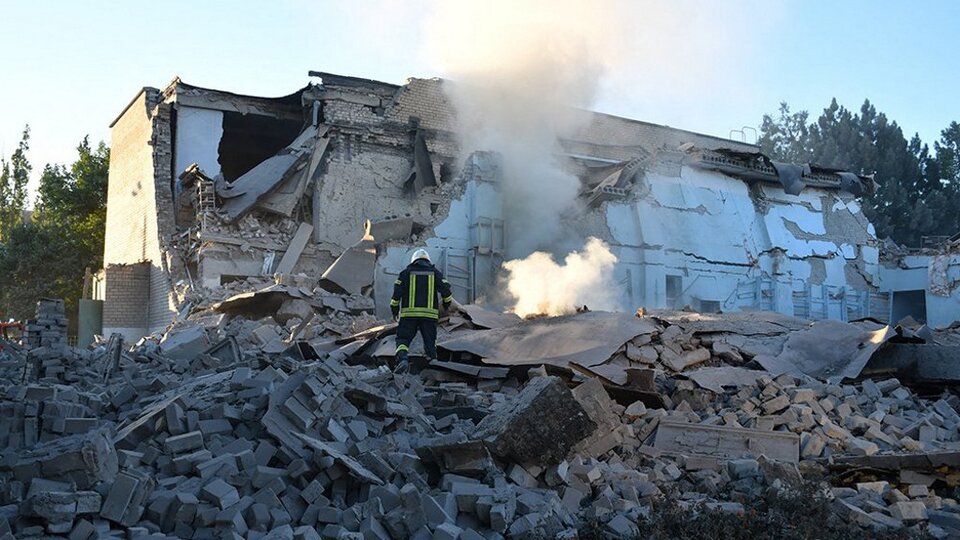 The European Commission is to ask European Union (EU) states next week to limit heating to 19º and cooling to 25º in public buildings and reduce gas demand, according to a draft text accessed by AFP agency. to do

The aim of the document is to reduce European gas consumption by 25,000 to 50,000 million cubic meters as part of an effort to counter the eventual decline or possible cessation of Russian gas supplies.

“Acting now could cut the impact of a sudden break by a third,” the Commission (the EU’s executive arm) argues in the document, which will be made public on July 20 and is subject to possible changes.

Zelensky asks for “special court” in The Hague for Russian invasion

Ukrainian President Volodymyr Zelensky called on Thursday for a “special court” to investigate Russia’s invasion of Ukraine during a conference in The Hague on war crimes committed in his country.

“Existing judicial institutions cannot bring all criminals to justice. Therefore, a special court is needed to deal with Russia’s crime of aggression against Ukraine,” said Zelensky, who participated in the forum via video conference.

A referendum on the annexation of the Ukrainian province of Zaporizhia to Russia will be held in September, a spokesman for the region’s civilian-military government announced today.

“The vote will be held in early autumn. The planned dates will be in the first half of September,” Vladimir Rokov told Russian news agency Sputnik.

Rokov noted that the final date will be announced when the “level of preparation and people’s involvement” is clear.

Since the February 24 invasion of Ukraine, Russian troops have been able to extend their control over the entire Kherson province and the Azov coast in Zaporizhia.

Civil-military administrations were established in these regions, which announced their intention to join Russia, began broadcasting Russian radio and television programs, and re-established commercial ties with Crimea, which broke away from Ukraine and rejoined Russia in March 2014.

At least 12 people, including a child, were killed and around 25 others were injured in multiple missile attacks by the Russian military against the city of Vinnytsia in central Ukraine on Thursday.

The attacks took place this morning, as the Deputy Head of the Office of the President of Ukraine, Kyrillo Tymoshenko, announced on his Telegram account, a fact confirmed by the National Police and the State Emergency Service.

“Russian missiles hit the center of Vinnytsia. 8 (people) died, including a small child. Wounded,” Tymoshenko said in the first message.

The state emergency service indicated shortly after that the death toll had already reached 12, with at least 25 injured.

Kaliningrad asks to go further in blocking the transit of goods

The governor of the Russian region of Kaliningrad, Anton Alijanov, today deemed the partial blockade of cargo traffic between Lithuania and the Baltic region 80% resolved, but called for more pressure on Brussels and Vilnius. Restrictions by highway.

“I think we should not stop because we have solved 80% of the problem this month, we should go ahead and solve this problem completely,” he told public television channel Rossia-1.

The European Commission (EC) clarified earlier in the day that social sanctions against Russia for its campaign of war in Ukraine do not ban rail transport of goods between Lithuania and the Russian border. years.

US Treasury Secretary Janet Yellen today stressed the need to adopt a capping mechanism that would “help consumers around the world” without direct restrictions on Russian crude prices.

“Without a ceiling on (Russian crude oil) prices, if there is an embargo, we will definitely see higher prices globally,” Yellen said at a press conference in Bali (Indonesia) on Thursday before attending a meeting of finance ministers and governors. G20 central banks on the island on Friday and Saturday.

Yellen continued that “we have not decided enough numbers” for the maximum price for the sale of Russian oil, a possibility already contemplated in the final declaration of the G7 after the meeting in Elmau (Germany) at the end of June ban on the transportation of crude oil from Russia.

See also  They arrested a German diplomat in Brazil: they suspected him of killing her husband

This, she said, would “continue to stimulate production for Russia,” Yellen added, otherwise “the EU and the U.S. could impose sanctions as an alternative to price caps.”

Emmanuel Macron led the traditional military parade of the French national holiday on Thursday, this time marked by the war in Ukraine, reflected in the presence of the NATO flag and soldiers from the nine member states of central and eastern Ukraine.

Of the 4,925 soldiers who marched on the Champs-Elysées, 106 were from nine European countries that were former members of the Warsaw Pact, where France wanted to show its support in this particular context of the Russian threat after the invasion of Ukraine.

Alongside these soldiers from Bulgaria, Estonia, Lithuania, Hungary, Latvia, Poland, the Czech Republic, Romania and Slovakia, the military parade was a reminder of France’s direct involvement in their defence.

This translates to 125 representatives of French troops on duty in eastern Europe, and has been reinforced since Russia invaded Ukraine at the end of February.

The head of the Donetsk People’s Republic, Denis Pushilin, said today that Russian and pro-Russian troops had almost brought the city of Sivarsk in eastern Ukraine’s Donetsk region under operational control.

“The situation is as follows: there are visible advances in the front-line positions in the north-east of the republic. It is, of course, that Chiversk has practically come under an operational encirclement. But all the roads, all the approaches are under fire from our positions,” he said on the First Channel of Russian television.

Sivarsk is located 44 kilometers east of Sloviansk and about 58 kilometers northeast of Kramatorsk, two major Ukrainian strongholds in the Donetsk region.

Ukrainian grain exports will involve the creation of a buffer zone

The export of Ukrainian grain, which has been stuck in ports due to the Russian war campaign in Ukraine, will involve the creation of a safe zone to inspect ships near Ukrainian waters, which will be carried out jointly by Turkey and the UN, the official Russian agency RIA. Novosti said today.

“It is understood that a buffer zone will be created near Ukraine’s territorial waters, brokered by UN representatives from Russia, Ukraine and Turkey,” said a source familiar with the talks between military experts in Istanbul on Wednesday.

According to Russian media, restrictions on ships docking in Ukrainian ports, Moscow’s insistence on stopping arms smuggling and “provocations” by Kyiv will be carried out by Turkey and the UN.

“The control will be carried out by the Turkish side and the UN. This formed the basis of the proposed mechanism for the work of the coordination center in Istanbul. The technical details will still be discussed,” the source said.

According to Q, the Russians continue their offensive in Donetsk, but without success

Russian troops are continuing their offensive in the Donetsk region of eastern Ukraine, particularly around the strategic city of Sloviansk, for another day, but without success, according to a recent report from the General Staff of the Armed Forces of Ukraine. .

Kremlin’s army has been trying for days to gain control of the Donetsk region after occupying neighboring Luhansk, with attacks on Sloviansk and Kramatorsk, two key cities in the region.