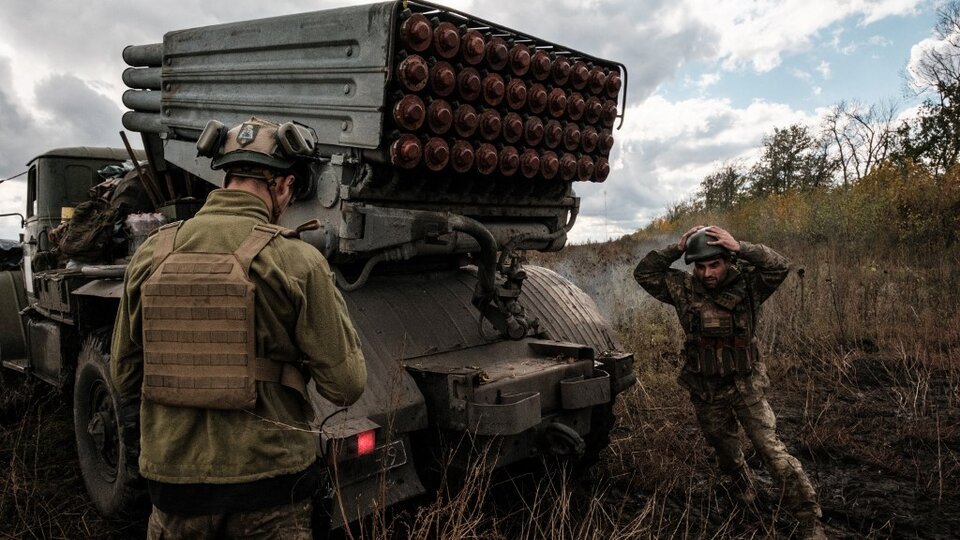 Romania’s Defense Minister, Vasile Dincu, accused his resignation today of being inconsistent with the country’s President Klaus Iohannis, who on October 11 rejected his statements asking NATO to negotiate with Russia to end the war in Ukraine.

“I encourage my gesture from the point of view that the President of Romania is unable to cooperate with the Supreme Commander of the Army,” Dincu wrote on his Facebook account. Develop processes and programs dependent on the ministry.

In an interview broadcast on October 8, the minister declared that “negotiations with Russia are the only way to peace” and proposed that NATO and the United States discuss Moscow’s security guarantees for Ukraine in exchange for peace.

Vitaliy Kim, head of the Mykolaiv regional military administration, said on television today that Russian troops have used Iranian-made “Shahed-136” kamikaze drones on the front lines in southern Ukraine and not against civilian infrastructure.

“Today there were two ‘Shahed’ drone strikes in the village of Shevchenkov. This was the first use on the front line, not terrorist attacks on civilian infrastructure by the Russians. Apparently they decided they couldn’t go anywhere and they started. Use them on the front line,” Kim said in reports collected by the Union Agency. said.

Meanwhile, the head of the Main Intelligence Directorate of the Ukrainian Ministry of Defense, Kyrillo Budanov, said that some missile reserves are almost exhausted, but “the use of the Shaheds” means that terrorism will actually last longer.

In an interview with “Ukrainska Pravda”, he noted that Russia has ordered 1,700 drones of all types, which have not yet been produced.

Ukraine is preparing to launch an offensive in the Zaporizhzhya region, a pro-Russian leader said

“They are sending tanks and infantry fighting vehicles,” Rogov, head of the “Together with Russia” movement in the Zaporizhia region, told Russia’s TASS agency, commenting on the movements on the Zaporizhia front.

The pro-Russian side pointed out that the Ukrainian command had moved air forces from the Zhytomyr and Vinnytsia regions in the west of the country to the Zaporizhia sector. “A serious shift in armaments and strengthening of positions shows that an attack is being prepared,” he asserted.

According to Rogo, the Ukrainian army is massing troops in the region and has “organized dozens of assault units” with mobilized soldiers trained in western Ukraine.

The head of “United Russia” did not exclude the possibility that the armed forces of Ukraine will try to destroy the Dnieper and Khajkovka hydroelectric power plants with the aim of rendering the Zaporizhia nuclear power plant useless, which is similar to Khajkovka. Controlled by the Russian military.

Ukraine rejects Russia’s accusation that it used a “dirty bomb”.

Russia held phone conversations with NATO countries on Sunday, accusing it of Ukraine Ready to use the “dirty bomb”, Kiev rejected “lies” and “absurdity”.

In three calls with his British, French and Turkish counterparts, Russian Defense Minister Sergei Shoigu expressed his concern over “provocative actions. Ukraine A ‘dirty bomb’ was used,” according to the ministry. He also spoke – for the second time since Friday – to his American counterpart, Lloyd Austin.

“Russian Lies Ukraine The alleged planned use of a ‘dirty bomb’ is absurd and dangerous,” Foreign Minister Dmytro Kuleba said on social media.

“If Russia calls and says that Ukraine Preparing something means one thing: Russia has already prepared all this. Now I think the world needs to be as tough as possible,” Ukrainian President Volodymyr Zelenskyy responded on social media.

The Kremlin on Monday condemned French President Emmanuel Macron and German Prime Minister Olaf Scholz as having “no desire” to mediate peace talks over the conflict in Ukraine.

“As for Messrs. Macron and Scholes, in recent times they have been unwilling to listen to the Russian side’s position and participate in any mediation efforts,” a Kremlin spokesman told reporters. , Dmitry Peskov.