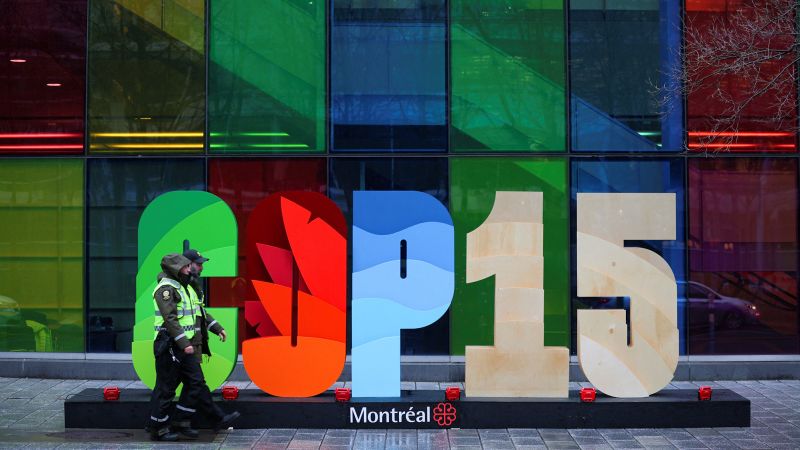 More than 190 countries adopted a comprehensive agreement to protect nature at the United Nations Biodiversity Conference in Montreal.

The hammer fell in the early hours of Monday on an agreement that includes 23 targets aimed at stopping the biodiversity crisis, including a pledge to protect 30% of land and oceans by 2030. Only 17% of land and 10% of oceans are currently considered protected. Activists hailed the campaign as a “major milestone” for preserving the complex and fragile ecosystems on which all depend.

But some states were unhappy, criticizing the agreement for not going far enough. The DRC stated that it could not support the agreement and complained that it was rushed through without proper procedures.

The road to this deal has been long and full of delays. It was originally supposed to happen in Kunming, China, but the difficulties posed by the country’s anti-Covid policies made that impossible. The conference was moved to Canada under joint Canadian and Chinese leadership. Hopes were high for the conference, with some calling it a “Paris biodiversity moment” – a reference to Paris climate agreement 2015R.

Nature is deteriorating at an alarming rate. In 2019, a landmark report from the United Nations Panel of Nature Experts found that Up to a million terrestrial and marine species Facing extinction due to human actions. Some scholars say that the world is entering Sixth mass extinctionIt is driven by human actions including deforestation, burning fossil fuels, and polluting rivers and oceans.

After two weeks of negotiations — with tensions over how to fund global conservation proving to be a particular sticking point — the Global Biodiversity Framework was finally adopted in Kunming and Montreal at around 3:30 a.m. local time on Monday.

In addition to pledging to protect nearly a third of land, fresh water and seas by 2030, the framework also includes an agreement to fix $500 billion in nature-damaging subsidies, and to increase biodiversity funding for developing countries.

“The agreement represents a major milestone in the conservation of our natural world, and biodiversity has never been at the top of the political and commercial agenda,” said Marco Lambertini, Director General of WWF International.

“The ‘30 by 30’ goal represents the largest commitment to preserving the land and oceans in history,” said Brian O’Donnell, director of Campaign for Nature. “It will have significant positive impacts on wildlife, address climate change, and secure the services nature provides to people, including Clean water and pollination of crops.

The framework also includes language to protect indigenous people, who play a huge role in protecting the world’s biodiversity but are often ignored and, in some cases, forced off lands in the name of conservation. “It has the potential to usher in a new paradigm for conservation, one in which the rights of indigenous peoples and local communities are upheld and where they are recognized for the leadership they have provided,” O’Donnell said.

While many welcomed the agreement, there are caveats that the proof of success will be in how the agreement is put into effect.

“It can be undermined by slow implementation and failure to mobilize promised resources,” said Lambertini.

The agreement has also been criticized for its lack of measurable pledges about reducing production and consumption, which are major drivers of biodiversity loss.

The agreement is not legally binding. Countries have agreed to a monitoring framework to assess progress, but “there are no binding commitments that make the whole mechanism look weak,” Emma Oliveras Minor, a senior research fellow at the University of Oxford’s Environmental Change Institute, told Science Media in London.

The history of biodiversity targets is checkered. The world has failed to meet one of the 20 Aichi Biodiversity Targets set more than a decade ago in Japan. Some developing countries have expressed disappointment about the levels of financing promised in the final deal.

“The Kunming-Montreal Agreement adopted today gives nature a fighting chance to recover in a world currently divided by geopolitics and inequality,” said Lin Li, Senior Director of Global Policy and Advocacy at WWF.

The next Biodiversity Summit will be held in 2024 and countries are expected to see enhanced financial commitments towards halting biodiversity loss.