After five people died in Guayaquil The attack was attributed to organized crime by the government, Ecuadorian President Guillermo Laso declared a state of emergency in the city this Sunday.

“I have declared the city of Guayaquil under a state of emergency due to the crime incidents that have taken place in the last few hours. The entire general force will be available to re-establish control of the city”The head of state announced on his social networks.

And warned: “We will not allow organized crime to try to run the country.” 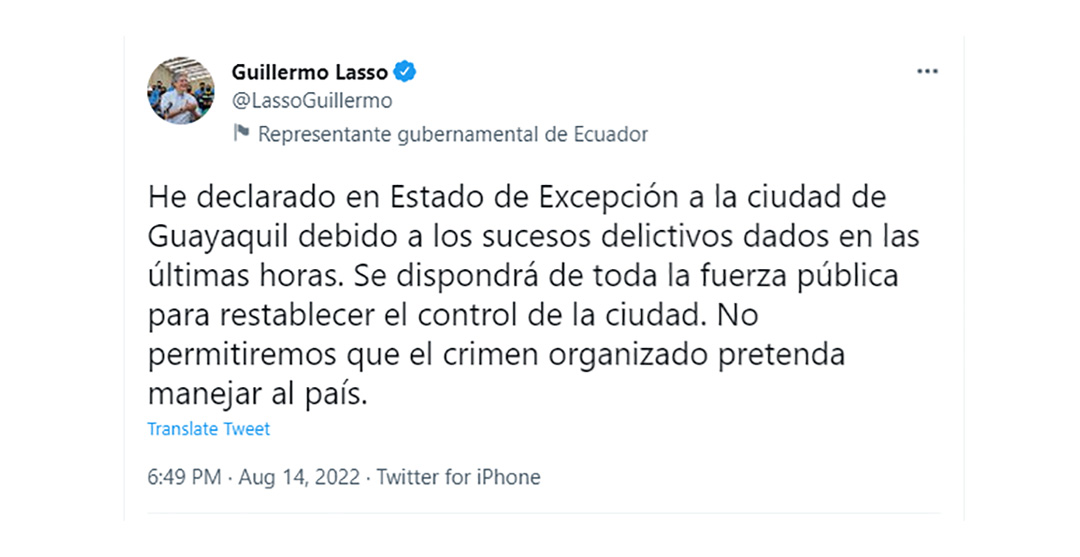 As indicated by the authorities, Two gunmen on a motorcycle planted explosives in front of a restaurant in the popular neighborhood of Cristo del Consuelo.

“Integrated criminal mercenaries, who have long drugged the economy, are now attacking with explosives,” Interior Minister Patricio Carrillo wrote on Twitter as he shared the news. “This is a declaration of war against the state,” he added.

Three people died at the scene of the explosion, while the other two died at a city hospital, General Victor Jared, commander of Region 8 based in Guayaquil (southwest), told reporters. He said that 20 more people were injured and were undergoing treatment at various medical centers.

After what happened The government has announced a $10,000 reward for information. To clarify the case.

Government Ministry headed by Francisco Jimenezissued an official statement describing the event An “act of terrorism” He also promised to find and punish those responsible for the attack. 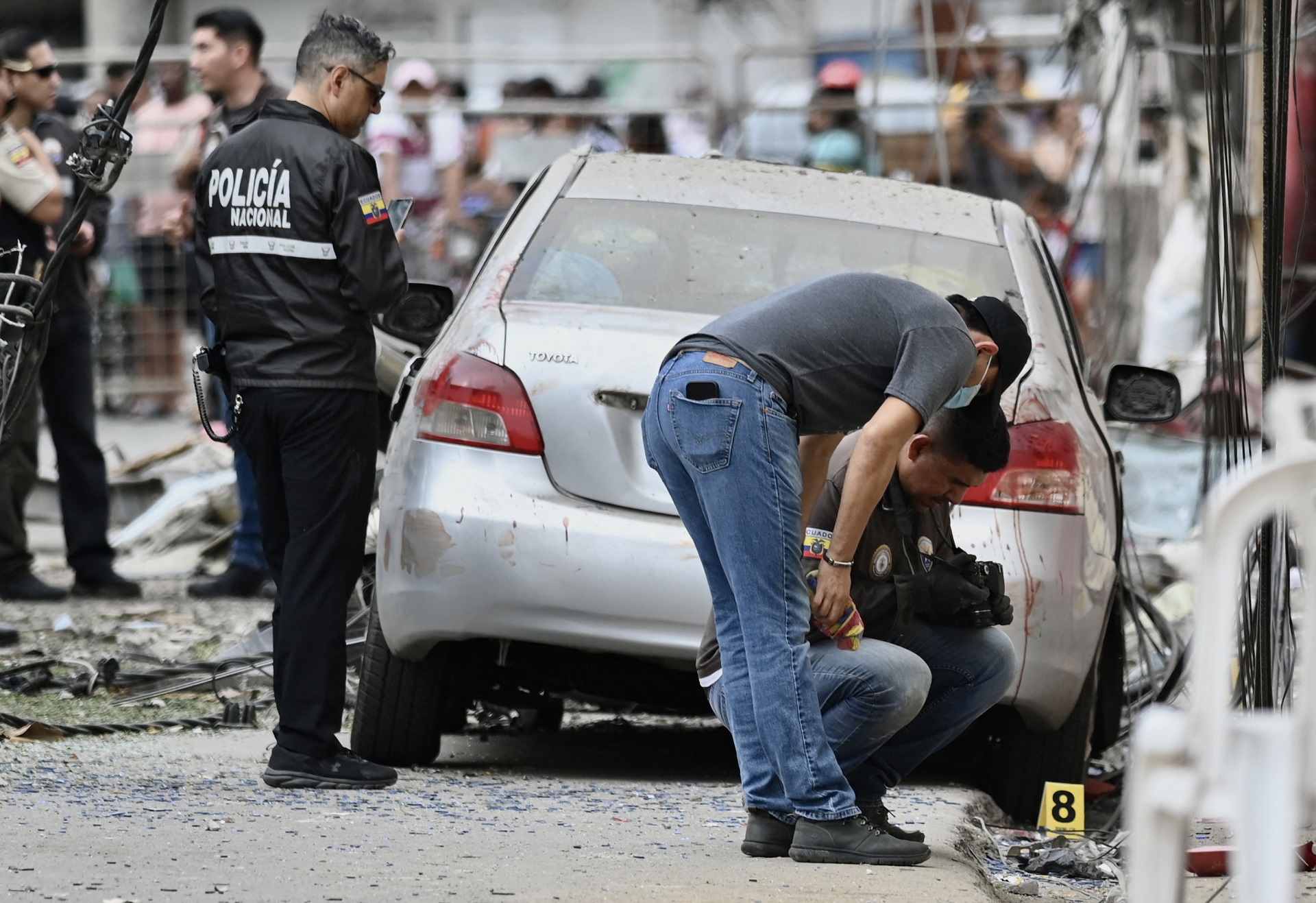 Members of the National Police examine the site of an explosion that the Ecuadorian government blames on organized crime, south of Guayaquil, Ecuador, on August 14, 2022 (AFP)

“On behalf of the national government and on my own behalf, we offer our deepest condolences to the families of those who lost their lives in this act of terrorism. We cannot bring back the lives of the dead, but we will identify the perpetrators of this crime and the full weight of the law will fall on them,” the text said.

And, he promised President Lasso has “clearly determined that security is a national priority” and for this reason, the executive urges all the country’s authorities to “join efforts to support citizen security.”

“Today more than ever, the security forces need confidence that they will not be considered criminals in order to fulfill their duty to protect Ecuadorians,” the ministry added, and stressed that “the government will work with the instruments of the law to guarantee coordinated work and integrated work.” A strong police force and armed forces should create an environment for lasting peace in this struggle.

For its part, The President questioned Guayaquil Mayor Cynthia Viteri on his social networks., who declared that “criminal gangs have become a state within a state.” “Mayor Meyer does not seem to understand that the enemy of the country is narco-terrorism that seeks to establish itself in society; And not the government. In countries that have gone through these painful experiences, authorities are acting in unison, not as divided as their reports suggest.The Head of State responded. 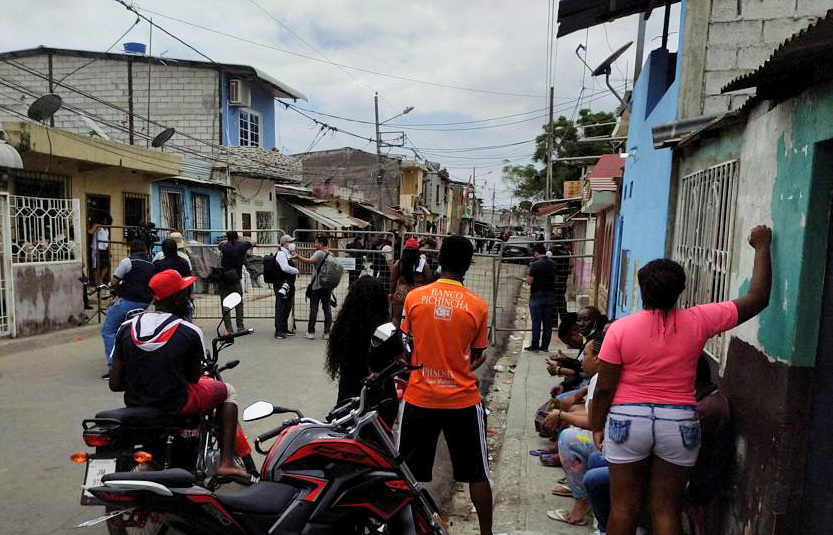 Two gunmen on a motorcycle planted explosives in front of a restaurant in the popular neighborhood of Cristo del Consuelo (REUTERS / Vicente Gaibor del Pino).

Lawyer and activist from Guayaquil Pedro Granja compared the insecurity in his city to that which plagued Medellin, Colombia, during the time of drug lord Pablo Escobar. “This is not Pablo Escobar’s Medellin. This is Cristo del Consuelo in Guayaquil. Terrorists detonated a bomb at dawn: 5 dead. 7 injured. 8 houses destroyed,” he condemned on Twitter.

“Consuelo’s Christ is a heartbreaking portrait of a country abandoned to its fate”The activist added.

Guayaquil, one of Ecuador’s most populous cities, has been the target of a wave of violence and crime, including assaults, contract killings (hitmen for hire) and shootouts between criminal gangs. Although this type of violence has spread to other cities in the country, such as Quito, Guayaquil resonated strongly with the media reporting the city’s crimes on a daily basis.

Ecuador is experiencing a crisis in its prisons, with clashes between armed groups trying to gain control of the prisons and clashes that have killed more than 400 inmates in the past two years.