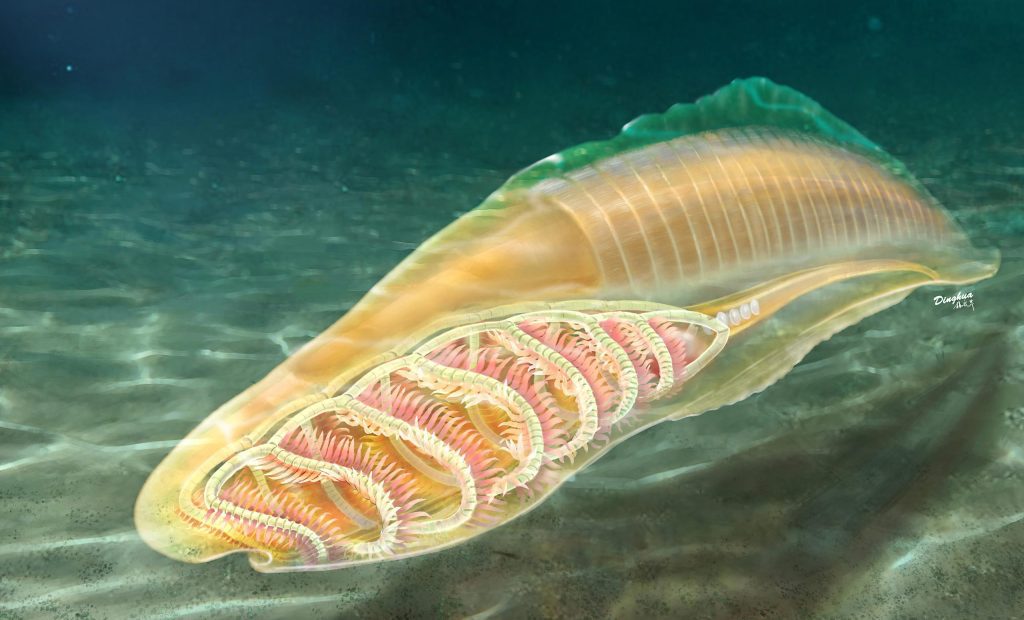 The new findings answer questions in the fossil record.

The perplexing gap in the fossil record that would explain the evolution of invertebrates into vertebrates has long puzzled scientists. Vertebrates share unique features, such as a backbone and a skull, and include fish, amphibians, reptiles, birds, mammals, and humans. On the other hand, invertebrates are animals that do not have a backbone.

The evolutionary process that moved invertebrates toward becoming vertebrates – and what those early vertebrates looked like – has been a mystery to scientists for centuries.

A team of scientists has now conducted a study of yunnanozoans, extinct creatures from the early Cambrian period (518 million years ago), and discovered evidence that they are the oldest known stem-like vertebrates. Stem vertebrates is a term referring to those extinct vertebrates, but they are closely related to living vertebrates.

The scientists, from the Nanjing Institute of Geology and Paleontology, the Chinese Academy of Sciences, and Nanjing University, published their findings on July 7, 2022, in the journal. Sciences.

Over the years, while researchers have studied how vertebrates evolved, the main focus of research has been the pharyngeal arches. These are the structures that produce parts of the face and neck, such as muscle, bone, and connective tissue. Scientists hypothesized that the pharyngeal arch evolved from an unconnected cartilaginous rod in the ancestors of vertebrates, such as the chordates, an invertebrate relative of vertebrates. However, whether such anatomy really existed in the ancient ancestors was not known for certain.

In an effort to better understand the role of the pharyngeal arch in ancient vertebrates, the research team studied the fossils of the Greekosan mollusks found in Yunnan Province, China. For years, researchers have studied yananozoans, with varying conclusions about how to interpret the creature’s anatomy. The affinity of yunnanozoans has been debated for nearly three decades, with numerous research papers published supporting differing opinions, including four in temper nature And the Sciences.

The research team set out to examine the newly collected yunnanozoan fossil samples in previously unexplored ways, and to conduct a high-resolution anatomical and infrastructural study. The 127 samples they studied contain well-preserved carbon residues that allowed the team to perform ultrastructural observations and detailed geochemical analyses.

The team applied X-ray microscopy, scanning electron microscopy, transmission electron microscopy, Raman spectroscopy, Fourier transform infrared spectroscopy, and energy-dispersive X-ray spectroscopy to the fossil specimens. Their study confirmed in multiple ways that yunnanozoans have cellular cartilages in the pharynx, a feature considered to be specific to vertebrates. The team’s findings support that yunnanozoans are stem-like vertebrates. The results of their study show that the Greeks are the oldest and most primitive relatives of the vertebrates of the crown group.

During their study, the team noted that all seven of the pharyngeal arches in the Yonanozoan fossils are similar to each other. All brackets have bamboo-like slats and strings. All adjacent arches are connected by dorsal and ventral horizontal rods that form a basket. The basket-like pharyngeal skeleton is a feature found today in living, jawless fish, such as lampreys and hagfish.

There are two types of pharyngeal skeletons – basket-like and isolated species – in Cambrian and living vertebrates. This means that the shape of pharyngeal skeletons has a much more complex early evolutionary history than previously thought, said Tian Qingyi, first author of the study, from Nanjing University and Nanjing Institute of Geology and Paleontology, Chinese Academy of Sciences.

Their research provided the team with new insights into the detailed structures of pharyngeal arches. The new anatomical observations that the team made in their study support the evolutionary position of ionozoans in the very basic part of the vertebrate tree of life.

This research was funded by the Strategic Priority Research (B) Program of the Chinese Academy of Sciences and the National Science Foundation of China.