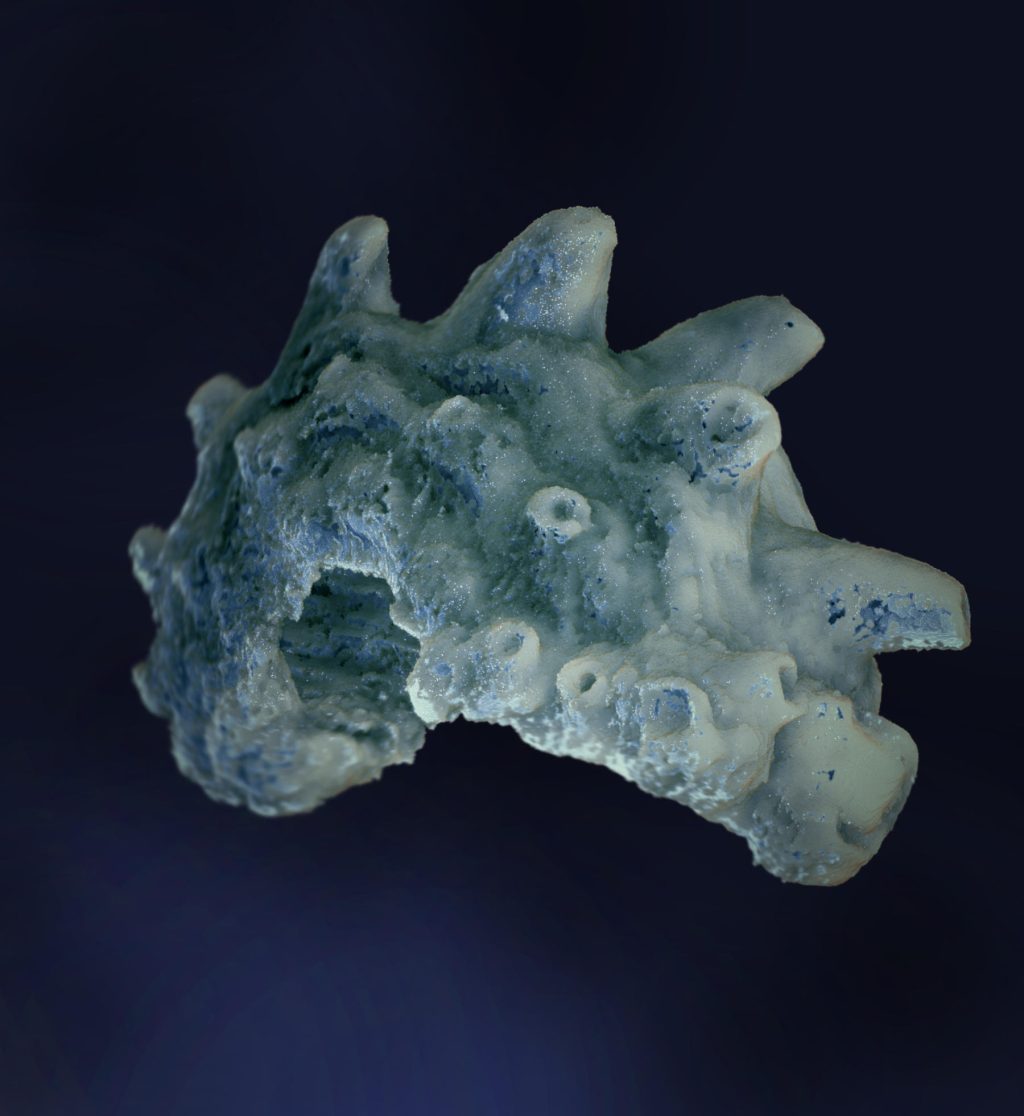 Volumetric reconstruction of a dental prosthesis in view of its lingual aspect (total pattern of Qianodus Dupis). The specimen is just over 2 mm long. Credit: Chu et al.

The rare Chinese fossil teeth changed scientists’ beliefs about the evolution of vertebrates.

An international team of scientists has discovered the remains of toothed fish dating back 439 million years, indicating that the ancestors of chondrichthyans (sharks and rays) and ossicles (ray and lobe-finned fish) arose much earlier than previously thought.

The results were recently published in the prestigious journal temper nature.

A remote site in southern China’s Guizhou Province has yielded remarkable fossil discoveries, including solitary teeth identified as belonging to a new species (Qianodus doubleis) of primitive jawed vertebrates from the ancient Silurian period (about 445 to 420 million years ago). Qianodus, named after the ancient name of present-day Guizhou, had unusual snail-like dental elements bearing several generations of teeth that were inserted throughout the animal’s life.

One of the rarest fossils found at the site was the snails (or zephyr) of Qianodus. Due to its small size, which rarely exceeds 2.5 mm, it had to be studied under magnification using visible light and X-rays.

A notable feature of the crumbs was that they had a pair of rows of teeth placed in a raised middle area from the base of the pads. These so-called primary teeth show a gradual growth in size as they approach the inner (lingual) worm. The distinct offset between the two primary rows of teeth is what distinguishes Qianodus flowers from those of other vertebrates. Although not previously detected in the tooth pads of fossil species, a similar arrangement of proximal tooth rows is also present in the teeth of many modern sharks.

Hypothetical section along the length of the tooth swivel in side view (comprehensive type of Qianodus Duplicis). The specimen is just over 2 mm long. Credit: Chu et al.

“Qianodus provides us with the first concrete evidence of teeth, and extension jaws, from this critical early period of vertebrate evolution,” said Li Qiang of Qujing Normal University.

In contrast to the teeth of modern sharks that are constantly falling out, researchers believe that Qianodus tooth pads remained in the mouth and increased in size as the animal grew. This explanation explains the gradual enlargement of the replacement teeth and the widening of the jaw base as a response to the continued increase in jaw size during development.

For the researchers, the key to reconstructing bubble growth was two samples at an early stage of formation, easily identifiable by their significantly smaller sizes and fewer teeth. A comparison with the most numerous mature blebs has provided paleontologists with rare insight into the evolutionary mechanics of early vertebrate teeth. These observations indicate that the primary teeth were the first to be formed while the addition of the lateral (additional) teeth occurred later in evolution.

“Despite their distinct characteristics, dental dials have in fact been reported in many extinct cartilaginous lineages and osteophytes,” said Plamen Andreev, lead author of the study. “Some of the early cartilaginous even built their teeth entirely out of closely spaced blooms.”

Researchers claim that this was also the case with Qianodus. They came to this conclusion after examining tiny bubbles (1–2 mm long) from a new species of synchrotron radiation — a CT scanning process that uses high-energy X-rays from a particle accelerator.

Professor Chu Min from the Institute of Vertebrate Paleontology and Paleoanthropology in Chinese Academy of Sciences.

These observations are supported by a phylogenetic tree that identifies Qianodus as a close relative of the extinct whorl-based toothed chondrichthyan groups.

“Our modified timeline for the origin of major groups of jawed vertebrates is consistent with the view that their initial diversification occurred in the early Silurian period,” Professor ZHU said.

The discovery of Qianodus provides concrete evidence of toothed, shark-like vertebrates tens of millions of years older than previously thought. The genetic analysis presented in the study defines Qianodus to be a primitive chondrichthyan, meaning that jawed fish were already quite diverse in the Lower Silurian and appeared soon after the evolution of skeletal mineralization in the jawless vertebrate ancestral lineages.

Evan Sansom, co-author of the study said: University of Birmingham.