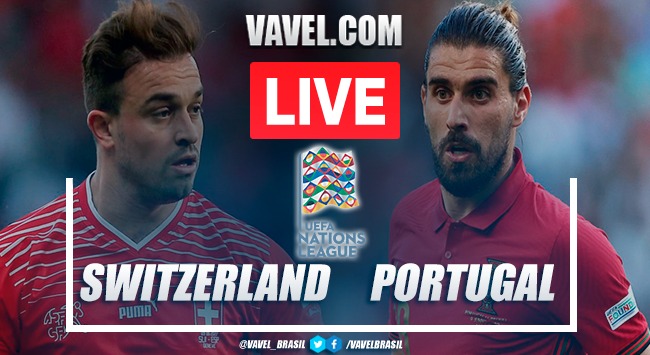 Thank you for your company in this game. Highlights available soon. I’ll see you later.

90 + 4′ After an exchange of passes on the left, Diogo Jota receives a pass on the left side of the area and hits a cross, but the ball is out of play.

89′ Nuno Mendes crossed from the left, Pepe reached the second post but misses.

88′ Bernardo Silva hits a front ball from the edge of the penalty area and Omlin blocks it in the middle of the goal.

87′ Gonzalo Guedes shoots from the penalty area and the defense stops. Pepe has his left foot and tries a shot with his left foot. Omlin saves it and Elvedi pulls it out completely.

86′ Zuber hits a powerful cross from the edge of the penalty area. Rui Patricio saved well without giving the ball rebounds.

81′ Ruben Neves outside and Ricardo Horta inside.

79′ Ricardo Rodriguez outside and Stergo inside.

78′ João Cancelo receives a free pass on the right side and crosses from the edge of the box. It was close, but it crossed the goal.

77′ Gonzalo Guedes crosses from the right to Diogo Jota. The striker rises very well and heads the ball for another good save by Omlin.

73′ Bruno Fernandes outside and Matthews Nunes inside.

72′ Gabriel Sow plays on the left flank and opens with Stephen on the right flank of the box. The midfielder makes the cut and sends it over the goal.

71′ Nuno Mendes makes a great cross-section and Gonzalo Guedes appears free on the right side of the area behind the defense and shoots. Omelin blocks. In the bounce, Gonzalo Guedes rolls over to Bernardo Silva. Half crosses, but the pass is high and Diogo Jota can’t convert it.

66′ Omlin kicked the ball in Bernardo Silva’s legs. The goalkeeper is recovering.

62′ On his first appearance in the match, Bernardo Silva fired a powerful shot from the edge of the penalty area and O’Mlin blocked it.

61′ Vitinha outside and Bernardo Silva inside.

61′ Rafael Liao outside Diogo Jota inside.

60′ Seferovi was quickly knocked out on the left side of the middle lane, and on his own, entering the box, he shot wide.

59′ Remo Froller takes a free kick from the left side with a cross into the area and Omlin jumps to keep the ball.

58′ Nuno Mendes takes a short corner from the left and passes to Bruno Fernandes. The ball is hit on the right side of the court but deflected to the back of the net.

56′ Nuno Mendes made a long entry throw to Bruno Fernandes on the right side of the penalty area, but the pass was too long and the ball crossed the line without veering.

In the hands of the goalkeeper

50′ João Cancelo receives a pass from the right wing, and plays a one-two beautiful with a three-fingered cross into Omlin’s hand.

49′ Switzerland replies with Freuler. Seferovi passes to the midfielder outside the penalty area, but he misses the goal.

48′ Nuno Mendes regains the ball in midfield after an empolo error. The striker enters the penalty area and shoots. Omlin tackles twice in two.

47′ João Cancelo receives a pass from Bruno Fernandes on the right side and crosses, but no one distracts it and the ball goes out of the back line.

The second half is in progress.

Otavio out, Guedes in.

See also  Tom Brady is said to be returning to the Pirates 'very soon'
3:49 PM 2 hours ago

The athletes are back on the field.

The end of the first half.

45 + 1′ Ricardo Rodriguez takes a free kick from the left and Danilo Pereira takes it inside the penalty area.

45′ Two minutes until the end of the first half.

39′ Nuno Mendes crosses low from the left and Akanji drives away.

37′ Bruno Fernandez exchanges passes with Joao Cancelo on the right side of the field and attempts a pass over the top, but O’Mlin goes out of his line to save the ball.

36′ Nuno Mendes tables with Rafael Leao on the left side of the field of attack and crosses. Akanji is moving away from the area.

26′ Joao Cancelo involved in a throw-in from the right, went ahead in front of Ricardo Rodriguez, opened up a space and tried to cross, but missed it completely.

21′ Shaqiri knocked out, Okafor came in.

18′ Andre Silva sent a diagonal pass from Bruno Fernandes on the left wing and crosses. Rafael Liao hits the ball and shoots, but the referee claims that the attacker is offside.

14′ The call has been reversed. Andre Silva makes a mistake by Elvedi at the beginning of the play.

11′ Elvedi recovers the ball in midfield and moves forward. Shaqiri receives passes and crosses. The ball hits the arm of Danilo Pereira and the referee rules a penalty kick.

10′ Rúben Neves raises Otávio in the area and Omlin is safe.

7′ Rafael Liao wins the dice with and destroys again on the left and passes a low cross. Omlin falls and rescues.

In the hands of the goalkeeper

6′ Rafael Liao is driven by Robin Neves again on the left and crosses over at the second post. Otávio swerves and catches Omlin.

lost possession of the ball

5′ Rafael Leão is set up by Rúben Neves on the left side and tries to get past his mark but puts the ball too far forward and it crosses the line.

1′ Shaqiri sends and destroys on the right wing and the winger passes the ball to Seferovic to head into the right corner of Rui Patricio.

The game will start in a few minutes.

Athletes warm up on the field.

Don’t miss any details of the Switzerland vs Portugal match, live updates and commentary here on VAVEL.

How to watch the match between Switzerland and Portugal live on TV and the Internet?

What time is the UEFA Nations League match between Switzerland and Portugal?

The European Nations League It is a competition organized by UEFA with the aim of increasing the number of competitive matches between all teams affiliated with the highest body of European football. All 55 teams were divided into leagues and groups. Leagues A, B and C consist of four groups of four teams each. In League D, there are two groups, one of four teams and one of three. In League A, the champions of each group play a four-corner final, called Final Four, played in a country between the finalists. The semi-finals and the decision to determine the third and final place are played in one match. According to UEFA, the 2022-23 Nations League semi-finals will be played on June 14-15, 2023, while the third-place play-off and final will be played on June 18, 2023. The lower leagues will be replaced in the relegation/promotion system.

The match will be held at the Geneva stadium

The Switzerland vs Portugal The match will take place in Geneva Stadiumin Geneva, Switzerland, with the capacity to receive 30,000 fans.

Welcome to VAVEL.com’s coverage of live updates of the 2022-23 UEFA Nations League Switzerland vs Portugal!

My name is Tainan Melo and I will be your host for this game. We’ll provide you with pre-game analysis, score updates and news as it happens live here on VAVEL.