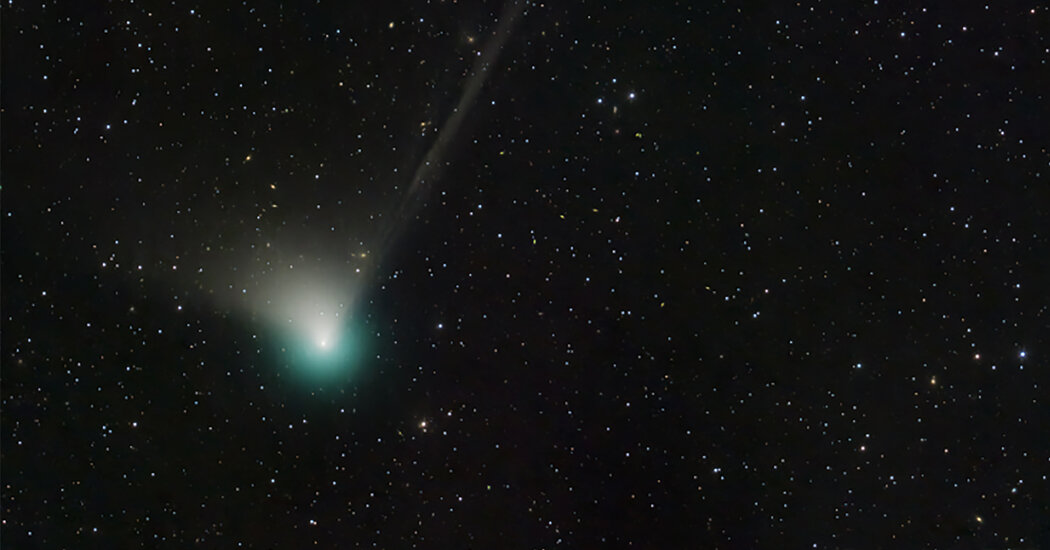 A greenish comet from the outer solar system is set to swing through Earth’s neighborhood in the coming days for the first time in 50,000 years.

The comet is steadily getting brighter and will reach its closest point on February 2, when it will be 26.4 million miles from the planet — 110 times the distance to the moon. From the northern hemisphere, the comet will likely be faintly visible to the naked eye.

But you don’t have to wait until February to spot this rare visitor. This upcoming weekend may provide favorable viewing opportunities with a pair of binoculars as the new moon creates dark skies.

What is the name of the comet?

The comet is known as C/2022 E3 (ZTF) because astronomers discovered it in March 2022 using a telescope on Mount Palomar in California called the Zwicky Transit Facility (or ZTF).

At the time, the cosmic intruder was present within Jupiter’s orbit, and was about 25,000 times fainter than the faintest star visible to the naked eye. But the ZTF, with its wide-field-of-view camera, scans the entire visible sky every night and is well-suited for spotting such objects.

What are comets and why are these comets green?

Comets are clumps of frozen dust and gas, which astronomers sometimes describe as “dirty snowballs.” Most are thought to originate from the distant, icy reaches of the solar system where gravitational outbursts sometimes propel them toward the sun – an interaction that turns them into gorgeous cosmic bodies.

When they leave their deep freeze, the sun’s heat erodes their surfaces, and they begin to spew out gases and dust until they host a glowing core, known as a coma, and a flamelike tail that can stretch for millions of miles.

See also  A black hole orbiting next to it - 'completely unexpected'

C/2022 E3 (ZTF), for example, now green glowing Because the ultraviolet rays from the sun are absorbed by a molecule in the comet called diatomic carbon – two carbon atoms fused together. The reaction emits a green light.

How bright is this comet?

The brightness of comets can be unpredictable. When scientists first discovered the object last year, they only knew it was likely visible from Earth.

“Because each comet is its own organism, you don’t know how it will react until it passes by the sun,” said Dr. O’Rourke.

Comet C/2022 E3 (ZTF) made its closest approach to the Sun on January 12, and the comet is now shining steadily as it hurtles toward Earth. Although the comet won’t pass until February 2, it’s already visible to the naked eye — an encouraging sign of viewing opportunities, said Mike Kelly, an astronomer at the University of Maryland and co-leader of the Solar System. Workgroup at the Zwicky Transit Facility.

However, seeing a comet can “require dark skies and an experienced observer,” said Dr. Kelly.

In addition, comets can always surprise us. Sometimes there can be a huge explosion of gas and dust, and the comet may suddenly become brighter even after it has left the Sun behind.

How do I spot a green comet?

To catch a comet, look north.

On January 21, the night of the new moon and thus the darkest sky, the comet will be close to Draco – a dragon-shaped constellation that stretches between the Big Dipper and the Little Dipper.

Over the following nights, the comet will crawl along the dragon’s tail. And on January 30, the comet will reside directly between the Big Dipper’s “cup” and Polaris, the North Star. If you used to find the North Star by following the two stars at the end of the Big Dipper’s Cup, you should be able to spot the comet. Simply erase this imaginary line until you see a faint smudge.

If you’re struggling, the comet might still be too faint or there could be a lot of light pollution. Experiment with binoculars.

“Even with relatively modest binoculars, the star’s powdery, hazy or smoky appearance should make it clear that it is a comet,” said E.C. Krupp, director of the Griffith Observatory in Los Angeles.

A telescope will help you spot colors and fine details, including the comet’s glowing coma and long tail.

For anyone living above the 35th parallel — imagine an east-west line stretching from North Carolina through the Texas Panhandle to Southern California — the comet will be visible all night starting January 22. But it is relatively low on the horizon in the early evening, so it may be best to look for the comet later in the evening or even early in the morning when the comet swings higher in the sky.

Dr. Krupp recommends looking this weekend when the moon phase is new, so it won’t cast a glow over the sky. But the comet will get brighter the closer it gets to Earth and it will be easier to spot at the end of the month. If you wait until then, you may want to try in the early morning after the moon has set.

Either way, the fishing will be fun.

“It’s like looking for some endangered species, and then it comes out,” said Dr. Krupp. “This is a truly magical experience.”

Why are astronomers excited about this green comet?

Comets are remnants of the early solar system and may have been responsible for seeding early Earth with the building blocks of life.

“It’s really a situation where we likely wouldn’t exist without them,” said Dr. O’Rourke.

However, we don’t get many opportunities to study these objects, since only a few each year are bright enough to be seen with the naked eye. As such, astronomers will be monitoring comets around the world C/2022 E3 (ZTF) over the coming months.

“We’re looking for our solar system’s place in the universe,” said Dr. Kelly, who will use the James Webb Space Telescope To observe the comet at the end of February. He wants to better understand how our planet formed in order to note the conditions that gave rise to life on Earth.

But Dr. Kelly and the others have to work quickly. After a brief appearance in the night sky, it’s not clear where C/2022 E3 (ZTF) might be headed. Since these objects are so closely associated with our solar system, the sun’s gravitational influence could force the comet to take another trip around our star — perhaps not to return for another 50,000 years. Or the comet might be ejected from the solar system entirely by the sun.