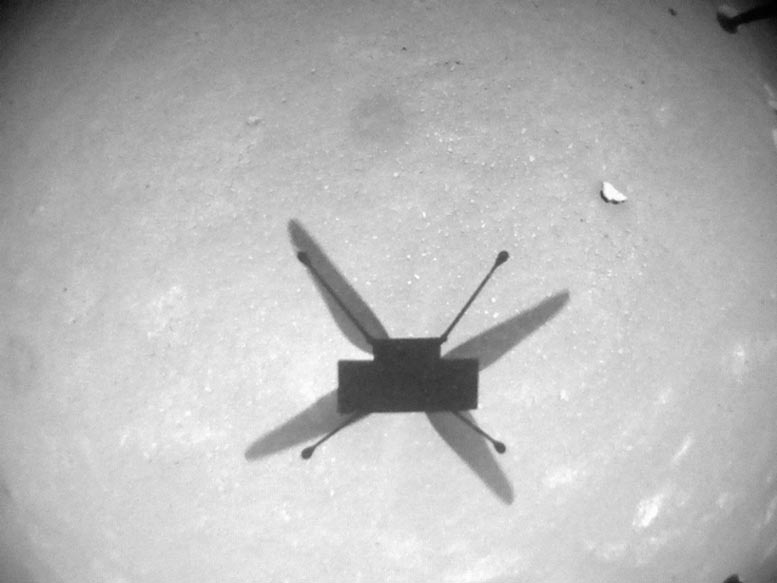 NASA’s Creative Mars Helicopter captured this image using its navigation camera. This camera is mounted in the fuselage of the helicopter and directed straight down to track the ground in flight. This image was acquired on November 6, 2021 (SOL 254 of the Perseverance Rover mission) at 12:06:00 mean local solar time. This was the date of Ingenuity’s fifteenth flight. Credit: NASA/JPL-Caltech

This foreign object debris was not visible in Navcam footage from the previous flight (32). The FOD is seen in Flight 33 Navcam imagery from the earliest frames to around halfway through the video, when it fell from the leg and drifted back to the Mars surface. All telemetry from the flight and a post-flight search and transfer are nominal and show no indication of vehicle damage. The Ingenuity and Perseverance Mars 2020 teams are currently working to determine the source of the debris.

Navigation Camera Imagery of Ingenuity’s Flight 33: A small piece of foreign object debris (FOD) is seen in this footage from the navigation camera of NASA’s Ingenuity Mars Helicopter during its 33rd flight on Mars on September 24, 2022. The FOD is seen attached to one of the rotorcraft’s landing legs (upper right part of image), then drifting away. Credits: NASA/JPL-Caltech

Flight 33 Preview – By the Numbers