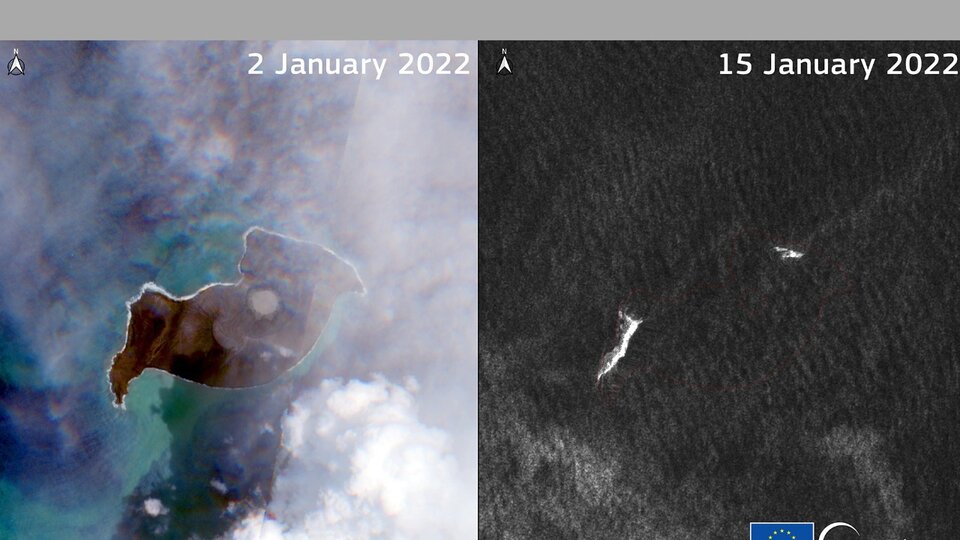 Australian authorities say a new “big volcanic eruption” has been detected Tonga in the volcano that caused the tsunami in the Pacific And about 80 thousand people have been affected.

The last eruption was detected at 10:00 pm on Sunday (7:10 pm Argentine time), according to the Darwin Volcanic Ash Advisory Center and the Pacific Tsunami Warning Center. In the zone The big waves were detected “could be the result of another eruption of the Tonga volcano,” they said.

Tonga It was almost cut off from the rest of the world on Monday after the volcanic eruption. Experts have warned that About 100,000 people living in the country may be disconnected for several weeks.

Neighboring countries and international organizations continue to assess the extent of the damage. New Zealand Prime Minister Jacinta Artern said they were “significant”.

New Zealand and Australia sent spy planes on Monday Made C-130 military transport aircraft available for distribution or landing, to assess damage and if runways were deemed to be operational.

If you know it A volcanic eruption on Saturday severely damaged the ash-covered capital, Nuku’aloba. And cut the underwater communication cable, which may take up to two weeks to recover.

“We know the immediate need for water”Artern told reporters that New Zealand relies on satellite phones to communicate with the country.

Spy planes can help inform the government Tonga To identify the extent of the damage caused by the volcano and tsunami and the need for assistance, Artern added.

Speaking to the New Zealand embassy in Tonga, the Prime Minister described the sinking of ships and “large rocks” off the north coast of Nuku’aloba. The New Zealand Defense Minister explained that for his part the island nation was able to restore electricity to “large areas” of the city.

See also  A fire in the Bronx has killed at least 19 people, including nine children

The tsunami, caused by a powerful underwater volcanic eruption in the Pacific Ocean, was felt in many countries. The waves caused two deaths in Peru And great damage to the capital of Tongan.

Powerful eruption triggered a series of warnings across the Pacific Ocean: New Zealand, Fiji, Vanuatu, Australia, US, Japan, Ecuador, Chile, among others In most places nothing major happened.

In the Fiji Islands, the Red Cross said it needed help, while in Tonga “we suspect up to 80,000 people could be affected by the eruption or tsunami,” said IFRC’s Katie Greenwood.

There are currently no deaths, but one is being talked about The “lunar landscape” after the island was covered in volcanic ash. Pollutes water resources among others.

According to experts, the eruption of the Hanga-Ha’boi volcano in Hanga-Tonga This is one of the most violent in the region in recent decades. The epicenter was reported below the Pacific Ocean floor, however; no tsunami alert was issued.

Through images taken from space, the last eruption of the Hanga Tonga-Hunga Ha’boi volcano was able to observe the moment a mushroom sent smoke and ash into the air and a shock wave through the surrounding ocean.

In Peru, two women They drowned on the beach in the Lombok area The local National Emergency Response Team (COEN) said that due to the “hostile waves” that formed after the explosion.

The Peruvian government announced on Saturday night that 22 ports facing the Pacific Ocean off the north and central coasts of the country had been closed for prevention due to “hostile waves” derived from the eruption.

In Alaska, 10,000 kilometers away, a powerful roar was heard, and in Scotland, on the opposite side of the volcano, Fife weather station recorded a jump in air pressure due to this event.

“The tsunami has had a significant impact as boats and large boulders have washed ashore off the north coast of Nokuoloba, the capital of Tonga,” said New Zealand Prime Minister Jacinta Artern.

“Nuku’alofa is covered in a thick layer of volcanic ash, but conditions are calm and stable,” Artern added. Explained “The gray cloud has caused pollution” so Tonga needs water.

The eruption lasted eight minutes and was heard “like distant thunder” in the Fiji Islands more than 800 kilometers away, officials in the capital, Suva.

The epicenter was reported below the Pacific Ocean floor, however; no tsunami alert was issued. At the other end of the Pacific Ocean, in Chile, the waves ranged from 30 centimeters to one meter.

“Significant sea level disturbances” up to half a meter have been recorded in Ecuador.

In Australia, coastal areas, including Sydney, could be hit by waves, officials said.

The Hunga Tonga-Hunga Ha’boi Volcano is located 65 km north of the Tongan capital, under the sea. However, its latest eruptions appeared on the surface and formed a small island.