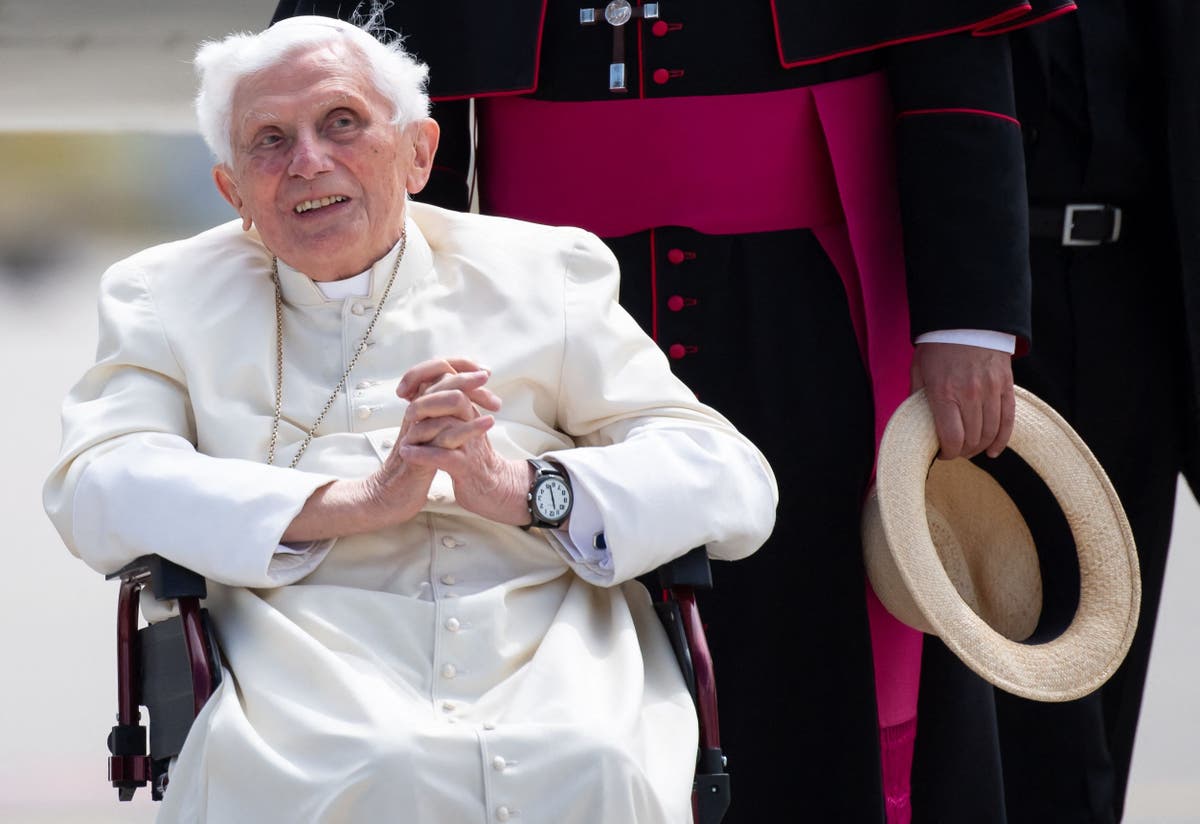 “His condition is stable at the moment,” Vatican spokesman Matteo Bruni said in a statement on Friday.

The Vatican had said earlier that the deterioration in his health was due to his “advanced age,” adding that Benedict was under constant monitoring by doctors.

Pope Francis said on Wednesday: “I would like to ask all of you for a special prayer for Pope Emeritus Benedict, who, in silence, sustains the Church. Let us remember him.”

“He is very ill, he asks the Lord to comfort him and support him in this testimony of love for the Church, to the end.”

Benedict, who is 95, became the first pope in nearly 600 years to resign in 2013. He has lived in the Vatican ever since.

The Vatican said Pope Emeritus Benedict XVI, whose health had deteriorated, was in a stable condition and was able to take part in a mass in his room.

“Last night the Pope Emeritus was able to rest well,” Vatican spokesman Matteo Bruni said in a statement. He also participated in the celebration of the Divine Liturgy in his room yesterday afternoon, and his condition is currently stable.

On Wednesday, Pope Francis revealed that his 95-year-old predecessor had been “very ill” and had gone to see him at his home in the Vatican Gardens.

Pope Francis calls for prayer for the “very ill” father

Pope Francis has called to pray for his “very ill” predecessor, Benedict.

In remarks to his final audience of the year, he asked people to “make a special prayer” for the ailing former pope.

He was addressing an audience in Paul VI Hall, Vatican City.

Summary: Who is the former Pope Benedict XVI?

The former pope was known as “God’s Rottweiler” due to his ultra-conservative views.

The same unclear protocols will apply upon Benedict’s death

It’s not clear, an expert said, whether the usual protocols will apply when former Pope Benedict dies.

The Catholic Church has strict rules upon the death of its leader.

Citing old age, Benedict XVI resigned in 2013, becoming the first pope in six centuries to step down from the position.

He continues to live in the Vatican, which means there have been two popes living side by side for nearly a decade.

Pope Francis revealed on Wednesday that Pope Benedict was “very ill” and had gone to see him at his home in the Vatican where he has lived since his retirement in 2013, sparking fears that he was close to death.

The Vatican said later that Benedict’s health had deteriorated in the last hours, but that the situation was under control as doctors were monitoring him.

Benedict in 2013 became the first pope in 600 years to resign, choosing to live out his retirement in seclusion in a converted monastery in the Vatican Gardens.

Few would have expected his retirement – now in his tenth year – to last longer than his eight-year reign as pope.

Yesterday, Vatican spokesman Matteo Bruni said Benedict “was able to rest well last night, was very lucid and alert, and today, while his condition remains serious, the situation at the moment is stable.”

He said, “Pope Francis renews the call to pray for him and accompany him in these difficult times.”

What would happen if Pope Benedict died?

Word of Pope Benedict’s failing health immediately raised questions about what would happen when he died, given the unprecedented reality of having a reigning pope supposedly preside over the funeral of the previous pontiff.

Most Vatican experts predict that any funeral will resemble that of any retired bishop in Rome, albeit with the caveat that there will be official delegations honoring a former head of state, as well as pilgrims from Germany — home of Benedict, Joseph Ratzinger’s ex — and beyond.

Otherwise, while the Vatican newspaper, L’Osservatore Romano, was headlining its editions yesterday with news of Benedict’s health, life went on as usual in the little city-state he calls Pope Benedict and Pope Francis.

Francis had what appeared to be a routine day for the public, meeting his ambassador to Madagascar, the captain of the Swiss Guards and a fellow Jesuit.

In the square, the line of tourists waiting to get to St. Peter’s Basilica wrapped almost entirely around the square, as couples and families stopped to take selfies in front of the life-size nativity scene and Christmas tree erected in the square.

In pictures: Faithful around the world join in prayer for Pope Benedict

Bishops in Germany asked for prayers and some faithful headed to the Church of Grace in the town square in Altoetting, a major pilgrimage destination a few miles from Benedict’s birthplace of Marktl am Inn, which he visited several times in his life.

“I know he was preparing for his return home to the eternal world,” said Herbert Hovoer, the town’s retired Catholic mayor who said he last saw Benedict in the spring.

“I think he is very calmly looking forward to this confrontation.”

At St Oswald’s Church in Marktel, where Benedict was baptized, Sandra Meyer placed at the head of the local congregation a framed portrait of the former pope and arranged a small pew so parishioners could kneel and pray for him.

Ms. Meyer said she was “shaken and deeply moved by the news” about Benedict’s health.

“I hope he has an easy time now and doesn’t suffer so much,” she said.

“We are so proud here in Marktel to have a Bavarian Papa,” said Meyer, 50, recalling the two times she met him in person.

While St. Peter’s Square in the Vatican was filled with outside visitors yesterday – during the height of the Christmas tourism season – some Italians were out to pay their respects or at least to offer a prayer.

One of the pilgrims, Giorgio Gebbin, said: “It is clearly a bad situation, we are all close to Pope Ratzinger, and we are grieving about the situation, so we have come here to make our little contribution.”

Vatican: Benedict XVI is clear and stable, but his condition is “serious”

Pope Emeritus Benedict XVI is transparent, vigilant and stable but his condition remains serious, the Vatican said yesterday, a day after it was revealed that the 95-year-old’s health had recently deteriorated.

Vatican spokesman Matteo Bruni said in a statement that Pope Francis had requested the continuation of the prayer “to accompany him in these difficult hours”.