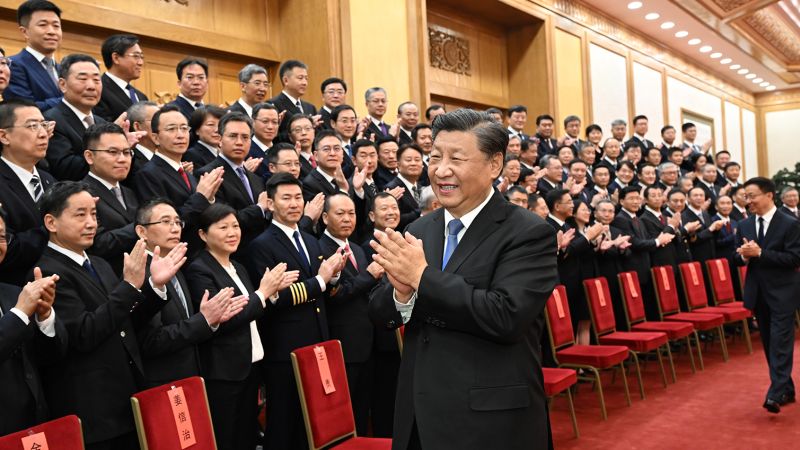 Protest banners hang on the Sitong Bridge in Beijing on October 13.

Pictures spread on Twitter on Thursday showing protest banners scattered over the Sitong Bridge in Beijing’s Haidian District in broad daylight, with plumes of smoke billowing from the bridge.

“Say no to Covid testing, yes to food. No to lockdown, yes to freedom. No to lies, yes to dignity. No to cultural revolution, yes to reform. No to the great leader, yes to voting. Don’t be a slave, be a citizen,” read one of the signs.

The other says: “Strike and remove the dictator and national traitor Xi Jinping.”

When CNN arrived at Situng Bridge around 3:30 p.m. Thursday, no protesters or signs could be seen – as if nothing had happened at all.

Some context: Public protest against the top leadership is extremely rare in China where dissidents face imprisonment or worse.

Thursday’s outbursts of discontent were even more surprising given the run-up to important political meetings, when authorities turned Beijing into a bulwark to maintain security and stability.

Censorship: Chinese social media users have spoken out to express their support and horror at the brazen challenge. Some shared the Chinese pop song “Lonely Warrior” in a veiled reference to the protester, who some called a “hero,” while others vowed never to forget him, posting under the hashtag: “I saw it.”

Several posts have been deleted and accounts suspended indefinitely after commenting on – or alluding to – the protest on Chinese social media such as Weibo, a Twitter-like platform, and WeChat, the super app.

Keywords were immediately blocked from search results on applications, such as “Sitong Bridge” and “Haidian” – the protest site. Terms such as “Beijing”, “warrior”, “courageous man” and even “courage” were also restricted.

Lock, test, repeat: China’s no-COVID strategy means that even a single infection can trigger a citywide lockdown, ordering people to stay home or move them to a quarantine center for isolation.

What to watch: Hopes that China would loosen the pandemic restrictions after the party congress were nearly dashed as the Communist Party maintained its hard-line approach.

In the week leading up to the important meeting, the country’s mouthpiece People’s Daily published three comments stressing that China will not let its guard down.