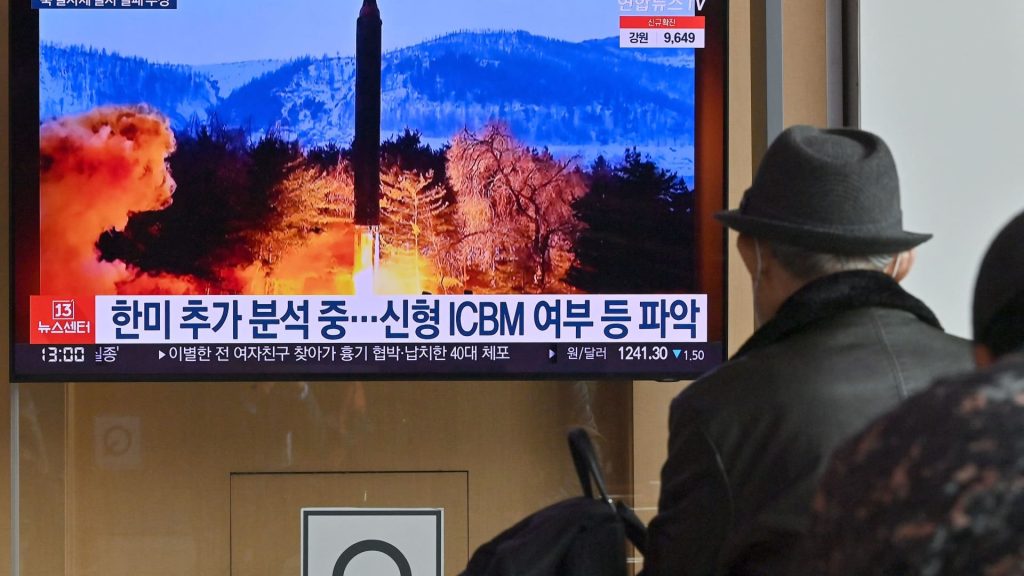 People watch a television screen showing a news broadcast with a file of footage of a North Korean missile test, at a railway station in Seoul on March 16, 2022.

Oniki told reporters that the missile could be a new model because it flew much further than North Korea’s November 2017 ICBM test.

The long-range missile, which had a maximum altitude of more than 6,000 kilometers (3,728 miles), flew for about 71 minutes and traveled about 1,100 kilometers, Oniki said.

It landed about 150 kilometers west of Japan’s Oshima Peninsula within Japan’s exclusive economic zone at about 15:44 local time (2:44 AM ET).

“It is absolutely unacceptable that while the world is responding to Russia’s aggression against Ukraine, North Korea is unilaterally escalating its provocations against the international community with this launch,” Japanese Chief Cabinet Secretary Hirokazu Matsuno said Thursday.

South Korea’s military said earlier Thursday that North Korea fired an “unidentified projectile” suspected of being a long-range ballistic missile, without specifying whether it was an ICBM.

Earlier this month, North Korea launched a missile that appeared to explode in mid-air over the capital, Pyongyang, shortly after takeoff, the South Korean military said. This came amid reports that the country is seeking to test-fire its largest missile to date.

South Korea, Japan and the United States have condemned North Korea’s ballistic missile tests, which have been conducted at a record pace in recent months. Thursday’s launch, according to Reuters, will be at least the 13th missile test Pyongyang has conducted since the start of the year.

See also  The Russo-Ukrainian War at a Glance: What We Know on Day 263 of the Invasion | Ukraine