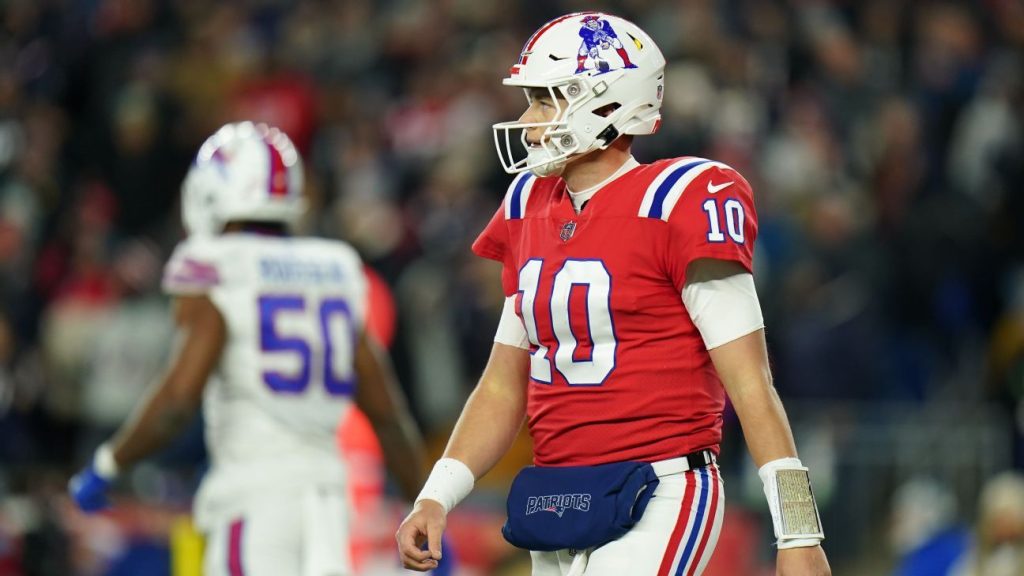 Foxboro, MA – New England Patriots quarterback Mac JonesFrustration boiled over on the sidelines during Thursday night’s 24-10 loss to the Buffalo Bills, but he said it wasn’t directed at anyone specifically.

The Prime broadcast showed a video of Jones at one point when he appeared to say, “Throw the ball! The fast game sucks!”

The Patriots played from behind for the last three quarters, and Jones stated afterward that he was calling for throwing deeper into the field.

“Obviously,” he said, “I just let my feelings get to me.” “What I said was about deepening that in the short game. I’ve done that part better. But that’s the short game we kept going, that works. But I felt we needed choppy play. I yelled that. To get everyone going. That’s emotional, This is football, I’m excited about this game.

“You obviously don’t want to let your emotions get the best of you. I think that’s pretty much it. It wasn’t directed at anyone. Just emotion coming out. We needed a spark.”

Jones said he believed he was on the same page with the coaching staff, specifically with Matt Patricia, who called him on plays.

“It was fair [saying]Let’s get started, let’s be aggressive, let’s take those shots. “Just go fight,” Jones said. My mate was on the same page. We kind of did it there at the end and moved it around a little bit.”

Jones finished 22 of 36 for 195 yards with one touchdown pass and no interceptions. He didn’t look like a quarterback for most of his second season after a rookie year in which he was named to the Pro Bowl as an alternate.

There have been big changes around Jones. Coordinator Josh McDaniels left to become the head coach of the Las Vegas Raiders after the 2021 season, and head coach Bill Belichick took over former NFL coaches Patricia and Joe Judge as head replacements despite their primary NFL backgrounds that come on defense and special teams, respectively.

Belichick also oversaw the streamlining of the offense, with players saying the goal was to streamline it and allow them to play faster.

But the Patriots (6-6) sank near the bottom of the league rankings in several key areas, including the red zone (31), third down conversion (25) and first downs earned per game (27). Those areas proved problematic again Thursday night against the Bills, who held possession time from 38:08 to 21:52.

Jones pointed a finger at himself.

“When you play from the back against a very good team and a good attacking side, you need to go out and play your best,” he said. “That starts with me. It definitely wasn’t good enough for me. I didn’t do a good enough job of getting ahead early, making it work. … It’s hard to watch the defense play a great game, not being able to give them anything back.”