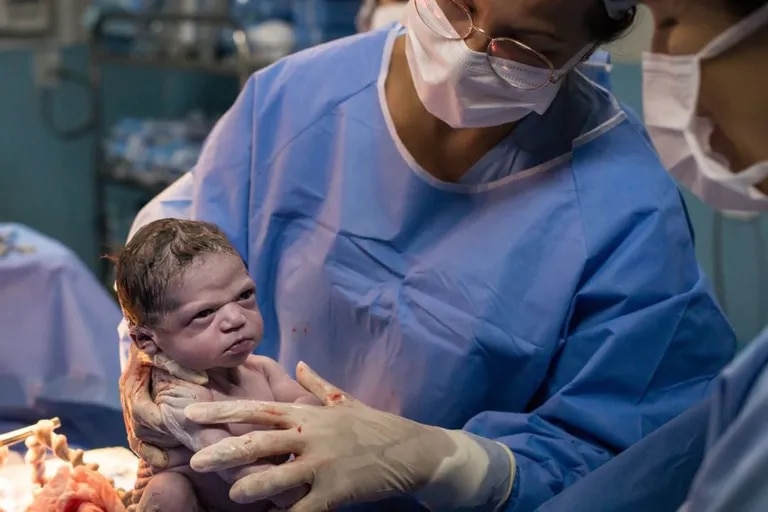 Two years ago, when the corona virus epidemic brought the world to a standstill, The photo of the newborn went viral on social media sites.. Now, the family has contacted the photographer again to recreate the image in a more upgraded version.

Her name is a child from the city of Mesquite in the province of Rio de Janeiro, Brazil Isabella Pereira de JesusBut everyone knows herIsa Pravinha”(“ Isa Enojadita ”, in Portuguese). A few days ago he turned two years old He has his own Instagram account, Almost 8 thousand users are following her. “Child memory”, Says the description of her profile, which has more than 200 publications, in which you can see the smiling woman, not like that iconic image captured by the photographer. Rodrigo Gustman In 2020.

“He opened his eyes wide, but he did not cry. The doctor even yelled ‘Cry, Isa!’ He had an intense expression and only started to cry after his umbilical cord was cut.”, Kunstman explained to the press at the time To grow. “There were 15 photos in a row from the time the doctor delivered the baby to the time it went into the mother’s lap. It lasted less than five seconds.

“I thought ‘What face did he make? My daughter was born a readymade meme“Isabel’s mother, Daiane de Jess Barbosa, told local media when she saw the very popular photo.People said she already knew she was coming, so she was born with a brave face”.

The idea of ​​creating a birth photography product De Isabella woke up because her mother wanted to preserve that moment forever. So he searched the internet and found Kunstman, who had been engaged in birth registration for four years. The expert explained that to capture good pictures like “Isa Pravinha” it depends on the cooperation of the medical team.

“It is important that the delivery be as humane as possible and that the mother be contacted as soon as the baby is born. When I posted it (in the photo), I thought it had the potential to become a monument, yes, but it’s always been a matter of luck”, He recalled.

On the eve of Isabella’s second birthday, Her mother contacted the photographer again to get a new view of her angry little girl. “Two years later I met Isa again!”, Kunstman wrote on his Instagram account and posted the tender image.

Beyond her first photo, the truth is, Isabella’s visit was a blessing to the family after a pregnancy with some complications. The mother was diagnosed with a subchorionic hematoma, which is the accumulation of blood between the placenta and the uterus. “My obstetrician recommended rest because abortion can occur, so I have 14 days off. After this time, the hematoma disappeared and I had a quiet pregnancy.He told the press some time ago To grow.

When she finally gave birth to the babyShared the full video of the birth on Instagram, and you can see the exact moment of the shot that traveled around the world.