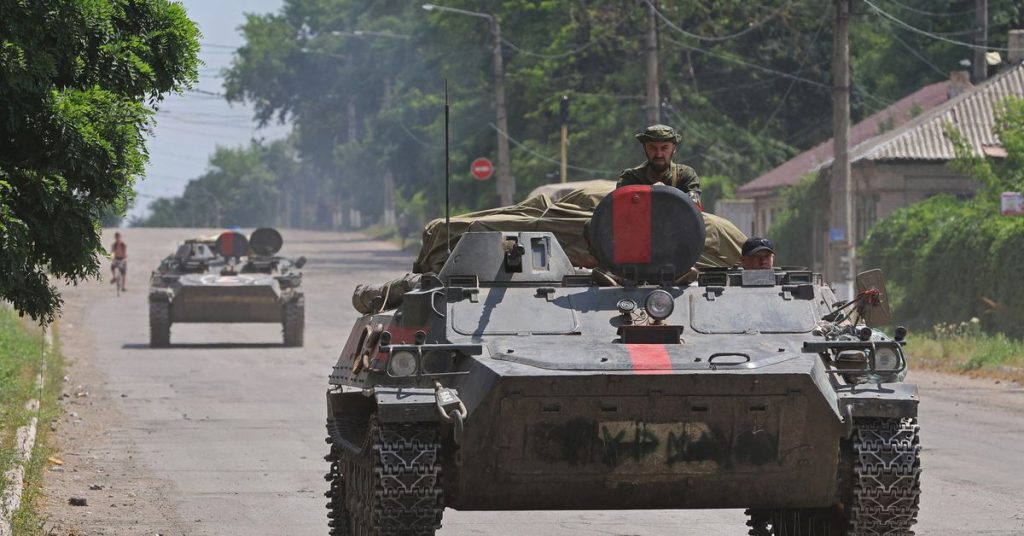 Kyiv (Reuters) – Russia has assigned mercenaries to keep parts of Ukraine’s front line, Britain’s Defense Ministry said on Friday, signaling it is short of combat infantry, as Kyiv ramps up a counter-offensive in the south. .

A greater reliance on paid fighters from Russia’s private military company Wagner Group to carry out front-line missions rather than their usual special operations work would be another sign that the Russian military is under pressure six months into its war in Ukraine.

But the British Ministry of Defense said in an intelligence update that it was unlikely that Wagner’s mercenaries would make up for the loss of regular infantry units or change the course of the Russian invasion.

“This is a significant change from the group’s previous employment since 2015, when it normally carried out tasks different from regular, overt and large-scale Russian military activities,” the ministry said on Twitter.

Outside normal business hours, Wagner and the Kremlin could not be reached for comment.

Officials in Kyiv said on Wednesday they had observed an “intense redeployment” of Russian forces in the south, where British defense officials believe the 49th Russian Army, stationed on the western bank of the Dnipro River, is at risk.

British intelligence said Thursday that the southern city of Kherson, key to Russia’s land supply lines from Russia-annexed Crimea, is now effectively cut off from other Russian-occupied territories.

The Kherson region fell to Russian forces shortly after the start of what Moscow calls a “special military operation” on February 24. Ukraine describes the Russian invasion as an imperial-style war of conquest.

The Ukrainian military has used long-range missile systems supplied by the West to severely damage three bridges across the Dnipro River in recent weeks, making it difficult for Russia to supply its forces on the West Bank.

Ukraine said its planes bombed five Russian strongholds around Kherson and another nearby city on Thursday, the epicenter of its biggest counterattack in the conflict.

Russia bombed the outskirts of Kyiv for the first time in weeks on Thursday. District Governor Oleksiy Kuleba said on Telegram that 15 people were wounded when rockets landed on military installations in the Vyshhorod district, on the outskirts of the capital.

Soldiers of pro-Russian forces ride an infantry fighting vehicle during the Ukraine-Russia conflict in the city of Lyschansk in the Luhansk region, Ukraine, July 4, 2022. REUTERS/Alexander Ermoshenko

The attack shattered the sense of life returning to normal in Kyiv since Russian forces abandoned attempts to capture the city in the early weeks of the war, in the face of fierce Ukrainian resistance.

The region’s governor, Vyacheslav Chusov, told Ukrainian television on Thursday that more than 10 Russian missiles had hit the Chernihiv region, northeast of Kyiv. Like Kyiv, Chernihiv has not been targeted for weeks.

The Northern Command of the Ukrainian Armed Forces said that more than 20 missiles were fired at the Chernihiv region bordering Russia from a base in Belarus, an ally of Russia.

Reuters was unable to verify the battlefield reports.

Ukraine’s counterattacks in the south come as Russia continues its battle for control of the entire Donbass industrial region in the east, which includes the Donetsk and Luhansk provinces.

Donetsk region governor Pavlo Kirilenko said on Telegram that Russian forces bombed the town of Bakhmut, which Russia described as a key target in its advance through Donetsk, four times on Thursday. He added that at least three people were killed and three wounded.

As the fighting raged, international efforts continued to try to reopen Ukrainian ports and allow the export of grain and other goods.

Allowing the safe passage of grain shipments from Ukraine should ease shortages that have left tens of millions of people around the world facing soaring food prices and starvation.

Russia and Ukraine struck a deal last week to lift a ban on grain exports from Black Sea ports, but UN aid coordinator Martin Griffiths said “critical” details of safe passage for ships were still being worked out.

Griffiths had hoped the first shipment of grain would be shipped from a Ukrainian port on the Black Sea on Friday. Read more