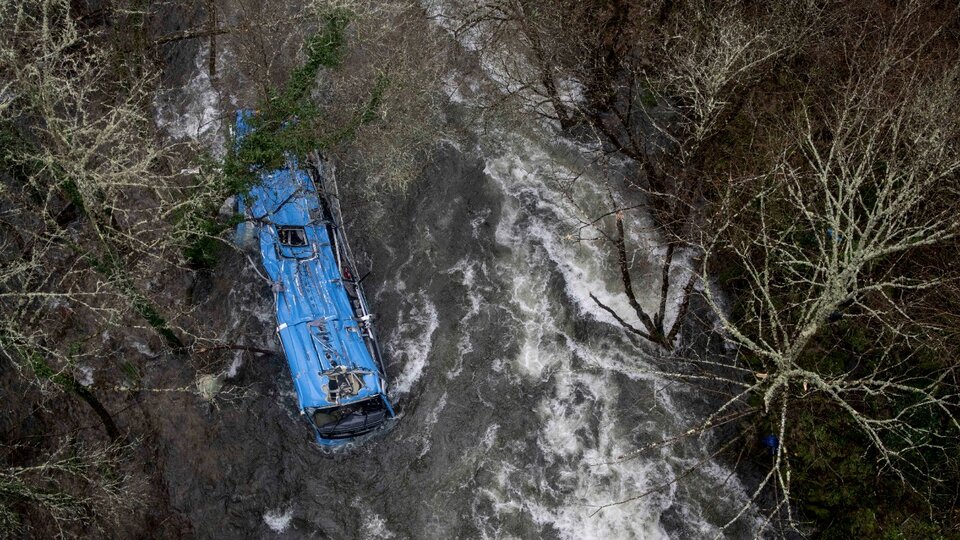 Six people were killed when a bus plunged into a river in Galicia (northwest Spain) last Christmas Day. Two others survived the road accident.

On Sunday afternoon, emergency crews halted rescue operations after identifying a sixth death and accepting the number of people on board given by relatives.

Since the incident, the dead have been found since last night, a third body was found inside the bus in the early hours of this Sunday morning, and another three hours later, in the river downstream from the incident site.

Reports from emergency services said two people who were rescued alive, the driver and a passenger, should be added to the casualties.

The rescue operations were called off early in the morning as the river was very high and fast and the vehicle’s water level had already reached the ceiling. Today.

The bus was stopped at Monterosso Prison (Lugo) on the Lugo-Vigo route and plunged into the river after it veered off the road on a bridge on Saturday.

The Leres River, where the bus fell, swelled above the overflow threshold and this continued during the rescue operation, which was difficult at night.

The bus fell to a height of about 75 meters, and the first warning came from a privateer who, looking over the bridge and unable to see anything, saw the safety barrier destroyed. Minutes later, a call came from inside the bus, describing what had happened and allowing the rescue operation to begin.

Firefighters worked at the scene of the accident, lowered themselves from the bridge with ropes and safety ropes, and were then joined by personnel from the Department of Emergency, Civil Defense, the Civil Guard of Transport and the Ministry of Transport.

Alfonso Ruta, head of Galicia’s regional government, pointed to “extremely bad” weather conditions today as one of the possible causes of the crash on the straight.