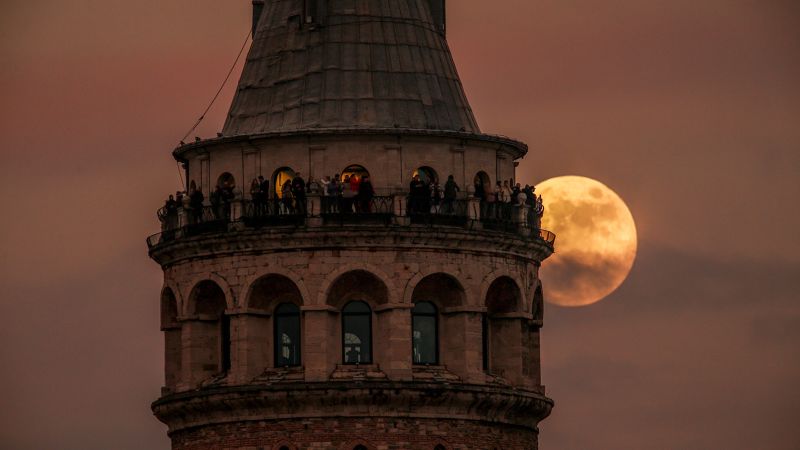 The December full moon, also known as the “cold moon,” will light up in the night sky on Wednesday, peaking at 11:08 p.m. ET.

Jupiter, Saturn and Mars will also be visible in the night sky on Wednesday, with an extremely rare phenomenon, known as a lunar occultation of Mars, which is set to occur around the peak full moon, According to EarthSky.

At this point, the red planet will disappear behind the moon short period of time. This unusual event will be visible in parts of the Americas, Europe and North Africa.

December 7th also marks the 50th anniversary of NASA Apollo 17 launch The last time a person set foot on the moon. So, this year’s cold moon offers viewers the chance to enjoy the spectacle of the moon and reflect on the huge space exploration that mankind has achieved.

“When you look at the moon, you have to realize that it’s not only beautiful…but it’s a very important object from a scientific point of view,” said Dr. Noah Petro, chief of NASA’s Geology, Geophysics and Geochemistry Laboratory.

“No other planet in our solar system has a moon quite like ours. It is unique in many ways, and we, as a community, of all mankind, are very lucky to have it in our backyard.”

The Mohawk people considered December’s full moon to be “tsothoharha,” or the time of the cold—a reference to the cold weather that usually accompanies, According to the Western Planetarium Washington website. Like many other Native American tribes, the Mohawk followed up on the months by giving a name For every full moon.

This full moon is also known as the “moon before Yule” in Europe, to celebrate Christmas, and the “long night moon” by the Mohicans, due to its proximity to the winter solstice, the longest night of the year, which falls on December 21 of this year, According to the old farmer’s almanac.

The full moon will make its way across the sky starting at sunset. And with the sun setting earlier in the Northern Hemisphere, there is a longer period of time for those looking to witness the lunar event. Pietro said that anywhere with a clear view of the sky will suffice, though for the best view, he recommends finding an area free of tall buildings and trees.

“On the day before and after, the moon will still appear full to the naked eye,” Pietro said. “So if it’s cloudy on the seventh day, you can try again on the eighth.”

Those in the southern hemisphere will get the same view of the full moon during nighttime hours, though the orientation will reverse, as always.

The Apollo 17 space flight was launched on December 7, 1972. This was the final mission of NASA’s Apollo program and brought the number of humans to have walked on the moon to 12. Harrison “Jack” Schmidt returned to Earth on December 19 after a 12-day mission.

Today, NASA successfully launched the Artemis program, which aims to establish the first lunar outpost and continue lunar exploration. The Artemis I mission launched on November 16thand sending the uncrewed Orion spacecraft on a 25.5-day trip to circumnavigate the Moon, with an expected return date of December 11, four days after the full moon.

The space agency hopes that more lunar discoveries will, in turn, lead to the first human footing on Mars.

“(The Moon) is a very important stretch of our planet that we’ve had the fortune to visit with humans … and we’re preparing to return to it with both robotic explorers and crew,” Pietro said.

“I hope people will take a moment to stop and think and think, ‘Wow, how lucky we are as a planet to have this moon with us.'” ”

The cold moon marks this year’s full moon event, but the December skies will also see other meteor showers. Sky-gatherers won’t want to miss the vibrant Geminids, which peak on December 14th – quickly followed by the Ursids and set to peak on December 22nd, According to the 2022 meteor shower guide from EarthSky.