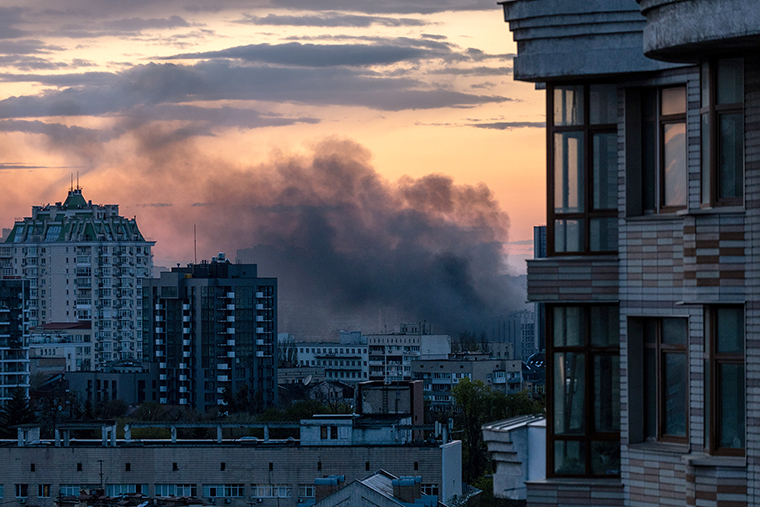 Ukrainian officials condemned the Russian missile attack on Kyiv Thursday night, which took place as United Nations Secretary-General Antonio Guterres was wrapping up his visit to the Ukrainian capital.

President Volodymyr Zelensky, in his daily video message, said, “Today, as soon as our talks are over [with Guterres] In Kyiv, Russian missiles flew over the city. 5 missiles. This says a lot about Russia’s true attitude toward global institutions, about the efforts of the Russian leadership to humiliate the United Nations and everything the organization stands for. Thus it requires an appropriate and robust response.”

“Russian missile strikes on Ukraine – on Kyiv, Fastiv, Odessa, Khmelnitsky and other cities – prove once again that one cannot relax yet, one cannot believe that the war is over. We still need to fight, we need to expel the occupiers,” Zelensky said.

Ukrainian Prime Minister Denis Shmyal said in a tweet: “During the meeting with @antonioguterres in Kyiv, we heard explosions. Russia launched a missile strike on the capital. I am sure that such a bold behavior of the occupier will be properly assessed by the UN Secretary-General. The war in Ukraine is An attack on global security!”

According to a statement issued by the Kyiv State Emergency Service:

“On April 28, at 8:13 pm, the Kyiv State Emergency Service received a report of a fire in the Shevchenkivsky district of the capital. As a result of enemy shelling, a fire broke out in a 25-storey apartment building with partial destruction of the first and second floors.
At 9:25 pm the fire was extinguished on a total area of ​​100 square meters.. Search and rescue operations are underway. According to preliminary data, 5 people were rescued and 10 others were injured. The information has been clarified.

See also  French elections: Emmanuel Macron and Marine Le Pen on track to advance to runoff, according to data