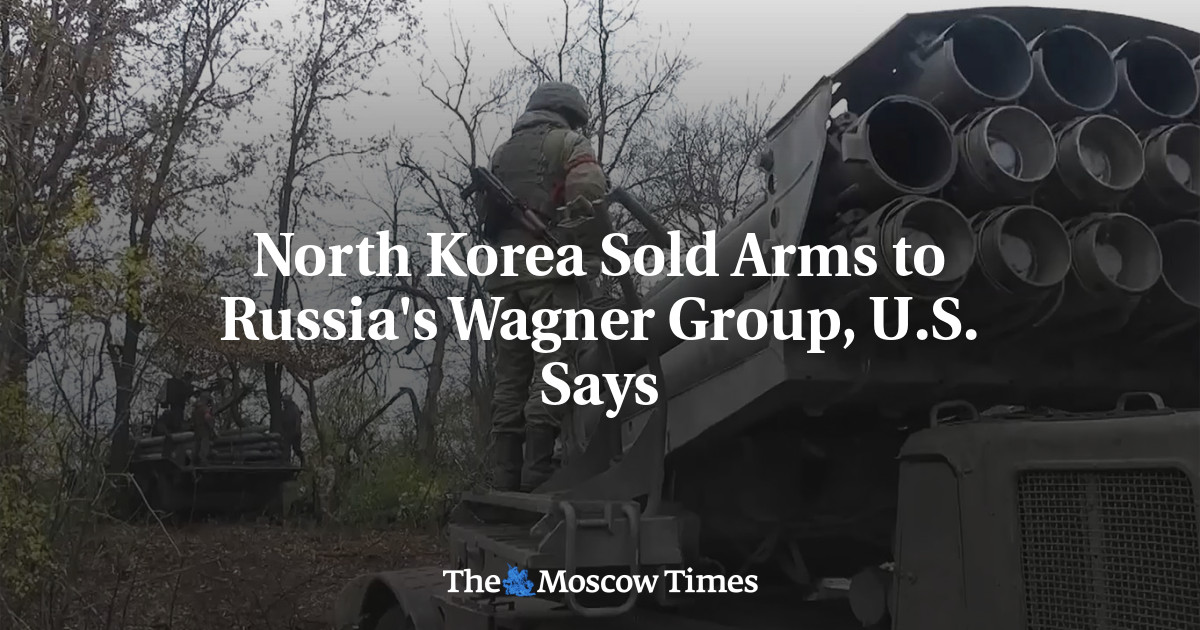 North Korea has delivered weapons to Russia’s private military group Wagner, the White House said Thursday, describing the mercenary institution as a “competitor” for power to the defense ministries and others in the Kremlin.

“Wagner is looking around the world for weapons suppliers to support its military operations in Ukraine,” Kirby told reporters.

“We can confirm that North Korea has completed an initial weapons delivery to Wagner, which has paid for that equipment,” he said.

According to Kirby, the group, which is independent of the Russian defense establishment and leads a bloody siege of Bakhmut, Ukraine, spends more than $100 million a month in its operations in Ukraine.

“Wagner is emerging as a rival power center to the Russian military and other Russian ministries,” Kirby said.

In a statement carried by KCNA, North Korea’s foreign ministry denied any arms deal with Russia had taken place, saying the story was “developed by some deceitful forces for various purposes”.

However, British Foreign Secretary James Cleverly said the UK agreed with the US assessment that North Korea had delivered weapons to Russia to the Wagner Group in violation of UN resolutions.

“The fact that President (Vladimir) Putin is turning to North Korea for help is a sign of Russia’s desperation and isolation,” Cleverly said in a statement.

“We will work with our partners to ensure that North Korea pays a heavy price for supporting Russia’s illegal war in Ukraine.”

The Wagner Group is controlled by Yevgeny Prigozhin, a businessman who was once called “Putin’s chef” for his work serving dinners for the powerful leader before and after he became Russia’s president.

Prigozhin, 61, is an outspoken critic of the Russian defense establishment’s handling of the war in Ukraine, and runs a number of diversified companies from Concord Catering Group in St. Petersburg.

One of them is the Internet Research Agency, the notorious internet “troll farm” in St. Petersburg that ran a massive online operation to interfere in the US elections to help then-presidential candidate Donald Trump in 2016.

So Prigozhin and several others were charged in the operation in the United States in 2018.

He has also been subject to sanctions from the United States and the European Union several times, in particular due to the activities of the Wagner Group.

The mercenary-like army carries out operations – apparently private but tacitly approved by the Kremlin – in Syria, Libya, Sudan, the Central African Republic and other countries in Africa.

In Ukraine, the group operated as an elite special forces operation that had better training, equipment, and supplies than the mainstream Russian military.

See also  Why do Iranian women cut their hair

Send convict recruits to the front

Prigozhin himself reportedly called the heavy fighting in Bakhmut a “meat grinder”, saying it would destroy the Ukrainian army.

But Wagner itself took a heavy toll, and Prigozhin relied on prisons to supply Wagner with convicts to fill her ranks.

In Bakhmut and other areas of intense fighting, Ukrainian forces say relatively untrained convicts have been forced to the front, where many have been killed or wounded.

According to American information, Kirby said, 90 percent of the Wagner fighters killed in combat in recent weeks, estimated at about a thousand, were convicts.

“It looks as if Mr. Prigozhin is only ready to throw Russian corpses into the meat grinder of Bakhmut,” he said.

Kirby said Prigozhin appeared more concerned with “swaying influence in the Kremlin” than protecting his own forces.

“For him, it’s all about how well he looks at Mr. Putin, how well he’s seen in the Kremlin,” Kirby said.