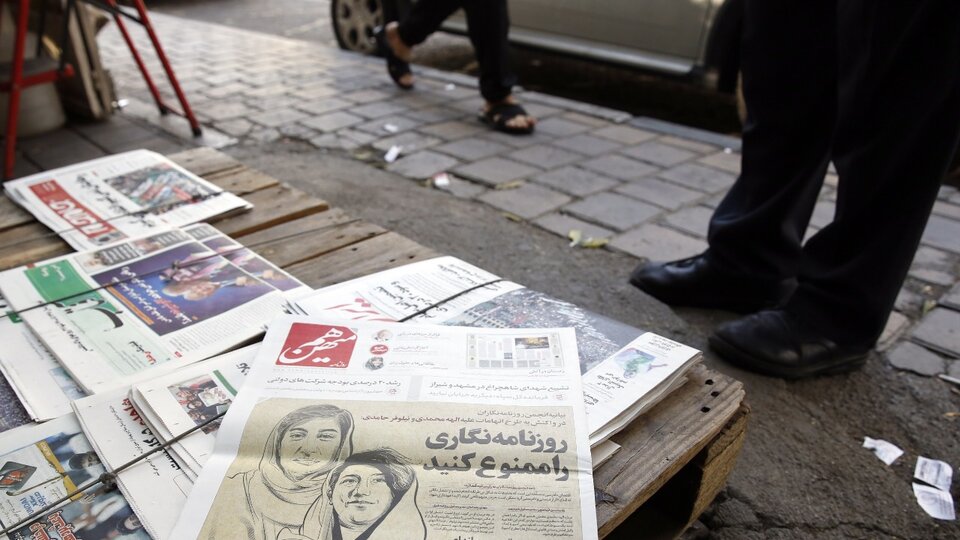 Masoud Sedayeshi, a spokesman for Iran’s judiciary, said on Tuesday that two Journalists who exposed Mahza Amini’s case She died under unclear circumstances while being picked up by the police for wearing the “wrong” veil – and was detained for “”Offenses against national security“In the Islamic Republic of Iran. Parallel to that, protests are going on against them Eighth week and suffer Increasingly harsh state repression aimed at enforcing “Talian Law”It promotes “an eye for an eye”.

Journalists are Nilubar HamediFrom the local newspaper Sharkwho reported on the arrest and subsequent death of Amini, and Ela Mohammadi of the newspaper Ham Meehanwho closed Burial of a 22-year-old girlThere the mobilization began.

“These Two people were arrested as accomplices with the intention of Offenses against the national security of the country and propaganda activities against the organizationSpokesman Sedayeshi said at his weekly press conference on Tuesday, local Iranian news agency reported. ISNA. For Sedayeshi, the outcome of the case is nearing completion, and new charges will be added to their files if they are found guilty of the crime.

On October 29, The Iran’s Ministry of Intelligence and the Revolutionary Guard spy agency accused the two journalists of CIA training. to spark protests that have rocked the country since September. “Those who published the first photo of Mahza Amini in the hospital and those who provoked Amini’s family with specific photos received special training in these courses,” Iran’s intelligence service said in a statement.

Mohammed AzorluJournalist Nilubar Hamedi’s husband indicated on his Twitter account that these claims are false: “Niloufar did not take any photos of Mahza Amini in the hospital bed to publish“, he explained.

Hamidi and Mohammad are fair Two of the 45 journalists and photographers were detained for doing their jobs during the mobilization. Almost all the media is in the hands of companies linked to the Iranian authorities, and many independent journalists and activists are under detention.

Protests continue in eight weeks in different forms despite arrests and crackdowns by security agencies. They fail to silence the youth who want change in the Islamic system. Distinguished university students Sharif University They gathered in a room at their university this Tuesday to support their arrested colleagues and condemn the repression during their protests.

A large number of people present in the meeting sang “Sudantram” in unison. The rise of the nation in favor of women, life and liberty, And promising that the dark night will end, the images posted on the Twitter account of the Islamic Association of the aforementioned university.

Likewise, the University of Science and Culture in Tehran It was the scene of a protest by students chanting against the establishment of the Islamic Republic “This year there will be deaths for the Revolutionary Guard, death for the system”According to videos shared on Twitter by activists and journalists.

Nightly shouts and slogans against the ruling theocratic system in Iran continue from the windows of houses, as well as slogans written on walls by people in different cities. The intelligence of the Revolutionary Guards has used drones to monitor and arrest many people In the southern province of Fars, for scrawling graffiti on walls, the local Iranian news agency reported on Tuesday. TasnimNear that elite force.

At least there was rebellion 277 dead and thousands of prisonersAccording to an Oslo-based NGO Iranian Human Rights (IHR). Iran has been experiencing protests since Amini’s death on September 16, which has been severely cracked down on by security forces after he was arrested by morality police three days earlier for improperly wearing an Islamic headscarf.

The first mobilizations for women’s freedom transformed into a movement against Islamic rule And they gained strength in the streets, universities, factories and colleges. Thousands of journalists, lawyers, activists and celebrities have been arrested since the protest began.

The crackdown risks intensifying: a majority of Iranian delegates demanded the use of the judicial system this Sunday. “Talian Law” -An eye for an eye, a tooth for a tooth- vs “Enemies of God”whom they identify with rioters and some politicians.

According to Iqana, the news agency of Iran’s parliament, “just like the Islamic State group, people’s lives and property have been damaged with knives and guns.” Dozens of arrested protesters have been charged with crimes punishable by death.