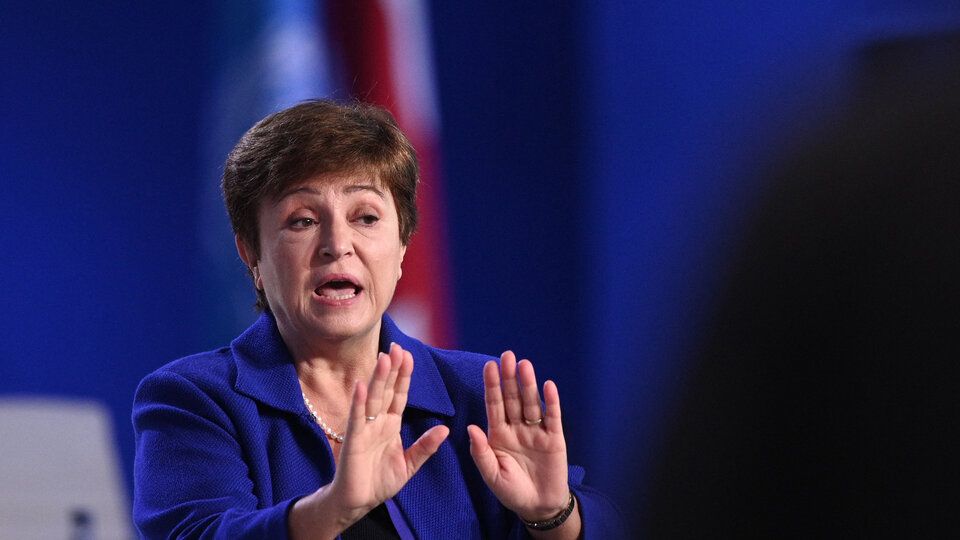 Almost two years after the beginning of the administration of Alberto Fernandez, the lack of agreement with the International Monetary Fund became a matter of debate in the election campaign. “I can agree with the IMF in five minutes, but I can not see your eyes”, Alberto Fernandez responded to Mauricio Macri on Friday, He said there was enough time to restructure the $ 45 billion debt that the government had left behind.

“It took five minutes (macro) to create a conflict that will last for generations,” the president continued, speaking at the opening ceremony of the UPCN Health Center in Avaloneta. “Let no one be confused, I can agree to the fund in five minutes, but I will never see your eye again, because In five minutes I will be on my knees and be able to comply with the demands of the creditors.. “We represent you, not the lenders”, Ended before the union audience.

The government argues that if it does not agree with the IMF, some of the conditions it has put on the negotiating table, such as the removal of interest surcharges, are still unresolved. The extra charge is about $ 1000 million a year for financing Argentina for borrowing more than $ 45 billion.

When Macri or María Eugenia Vidal They claim that everything can be fixed in five minutes They did not explain why they had not done it before. If they can avoid the extra charge, for example, why didn’t they remove it from the beginning?

The truth is, after almost two years of insistence, the government achieved this last weekend. At the G20 summit in RomeGroup leaders recommend that the IMF investigate the matter. Thursday, That confirmed the funding Before the end of the year, at a board meeting.

However, Argentine Ambassador to the United States Jorge Arcello warned that the fund’s technicians were opposed to the plan to remove the surcharge, although he hoped it would happen because of the stance taken by countries in the G20.

“I hope there is a possibility of concluding a deal before March under the terms we demand,” the diplomat said. “It’s a complex negotiation and it’s starting to move in a definite way,” he added. “We want a deal that allows us to continue to grow. A path that allows us to grow and pay. Grow in that order and pay.”, He noted.

Another feature claimed by the government is the inclusion in the treaty of a provision guaranteeing Argentina better borrowing from the IMF in the future. So far, the maximum repayment period offered by the agency is ten years. Martin Guzmn pointed out that Argentina and other countries are working to make changes in that direction, and with the contribution of the powers that be, to create “anti-funding” for new funding for countries in need of overcoming their crises.

I.e., The government’s plan is to establish a negotiation process in various sectors of the international community, Beyond what was established in the first agreement with the IMF, which allows conditions to improve.

The ruling party’s strategy, together with opposition to change, is being questioned by institutional economists, the mainstream media and the financial markets. They see the government taking too long to close immediately, which should include structural reforms such as a strong commitment to financial restructuring, a cash tourney and lower taxes on companies, more flexible labor and changes to the pension system.

“It would not have taken us two years to make a deal with the IMF,” Vidal alleged. “While we speak out against the finances, we have been paying for two years the maturity we could have avoided with the new contract and lower fees.”, He pointed out.

According to the first point of this report, in the Ministry of Economy, another requirement for Argentina to sign a new plan with the IMF is to repay $ 2.3 billion and 1.9 billion in payments that the country has been paying since September. If no prior understanding is reached, it will be delivered by the end of December.

As for interest rates, Macri should be held accountable for bringing the IMF back to Argentina. If the Cambiemos government does not ask for $ 57 billion, no agreement with the fund is needed.. In these ways, the other basic questions that the opposition and the mainstream press hide are:

“There must be a sovereign ignorance about debt, which signifies a strong mobilization of the Argentine people and Latin America.. Some of this can be seen in what is happening in Chile, Colombia or Peru, where there were strong mobilizations against adjustment plans, presented in Argentina against deeply rooted neoliberal models. Now there is a strong question coming from the mobilization of the people; Ignorance of debt is the only way for the vast majority of the population to think of a way out. “, Nicolas del Cono promised when determining the position of the Left Front.

That position carries the cost of secession from countries that are part of the IMF, which are basically the majority, including the United States and other powers. Rejection of the funds would compromise access to the loans of other international institutions such as the World Bank, IDB and foreign investment banks. The foundation gained in the G20 will also be lost and there may be difficulties in pre-export financing and investment inflows. Before that, the state must manage financial and forex tensions, of course the blue dollar will fly at any price. In hindsight, this would be Argentina’s greatest achievement in repaying a debt that has had an impact for decades. These are unfinished questions that FIT explains how to solve.